Yates told a Senate panel she alerted the White House more than two weeks before Trump fired Flynn for having lied about contacts with Russia’s ambassador to the United States.

She said she was concerned about repeated statements from Vice President Mike Pence and other administration officials incorrectly stating that Flynn had not been in touch with Ambassador Sergey Kislyak, when routine intercepts had shown the two men had spoken.

She added, “Every time that happened, it increased the compromise, and to state the obvious, you don’t want your national security adviser compromised with the Russians.”

Eighteen days after first learning of Yates’s concerns, Trump fired Flynn, saying he no longer had confidence in having him as a key White House adviser.

Monday’s testimony came as part of a Senate investigation into Russian meddling in last year’s U.S. presidential election, which Trump won over former Secretary of State Hillary Clinton. Trump has dismissed the probe, as well as separate investigations by the FBI and the House of Representatives, and has repeatedly said his campaign had no ties to Russia.

The president used Twitter to blame the administration of former President Barack Obama for providing “the highest security clearance” for Flynn when he served as chief of the Defense Intelligence Agency.

While Flynn had the clearance, investigators say he failed to disclose the Russian payment and another one for more than $500,000 to represent Turkey. He accepted the payments, the investigators say, after specifically being warned when he retired from the military to not take money from foreign governments. 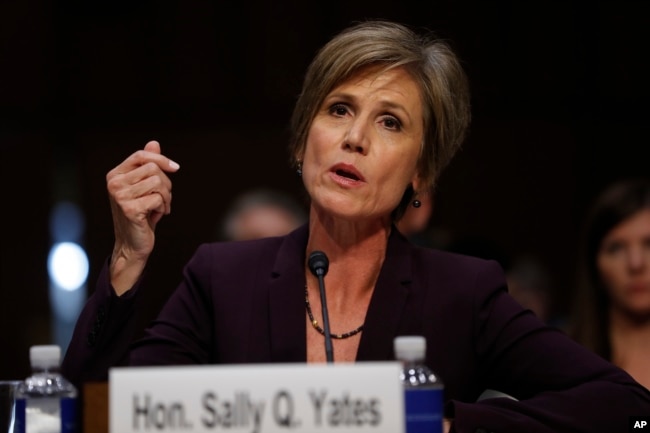 Obama fired Flynn in 2014 because of his disruptive management style, and personally warned Trump against naming Flynn as national security adviser.

White House spokesman Sean Spicer, confirming media reports of Obama’s warning to Trump, said it was no secret that Obama “wasn’t exactly a fan” of Flynn and questioned why Flynn was not stripped of his security clearance.

“Why did the Obama administration let Flynn go to Russia for a paid speaking engagement and receive a fee?” Spicer said. “There were steps that they could have taken that – if that was truly a concern.”

Flynn was paid more than $30,000 for a Moscow trip in 2015, where he sat next to Russian President Vladimir Putin at a dinner celebrating the 10th anniversary of the Kremlin-sponsored Russia Today television network.

James Clapper, Obama’s director of national intelligence, told the Senate committee that the Russian interference in the U.S. election exceeded Moscow’s “wildest expectations.” He said it was aimed to “demean Secretary Clinton and advantage Mr. Trump.”

Clapper was instrumental in the U.S. intelligence community’s conclusion that Russia sought to boost Trump’s chances of winning the election by hacking into the computer of the campaign chief for Clinton.

The anti-secrecy group WikiLeaks subsequently released thousands of emails in the weeks before the election that showed embarrassing behind-the-scenes Democratic operations aimed at helping Clinton win her party’s presidential nomination.

Clinton last week partly blamed her upset loss to Trump on the release of the emails before the November election.