On Sunday, North Korea claimed it had completed its sixth nuclear test – a hydrogen bomb.

This test was performed underground by the notoriously secretive regime. So, how can the international community know the state news agency was telling the truth?

The 6.3 magnitude tremor tells us there was an explosion Sunday. But to know this was a nuclear test, we have to detect the signature of a nuclear explosion.

What Can Actually Trigger War on The Korean Peninsula?

Nuclear weapons either produce energy through nuclear fission (fission bombs) or a combination of fission and fusion (thermonuclear or hydrogen bombs). In both cases, nuclear reactions with neutrons cause the uranium or plutonium fuel to fission into two smaller nuclei, called fission fragments. These fragments are radioactive, and can be detected by their characteristic decay radiation.

If we detect these fission fragments, we know that a nuclear explosion occurred. And that’s where “sniffer” planes come in.

Since 1947, the United States Air Force has operated a nuclear explosions detection unit.

The current fleet uses the WC-135 Constant Phoenix. The aircraft fly through clouds of radioactive debris to collect air samples and catch dust. By measuring their decay, fission fragments can be detected in minute quantities. 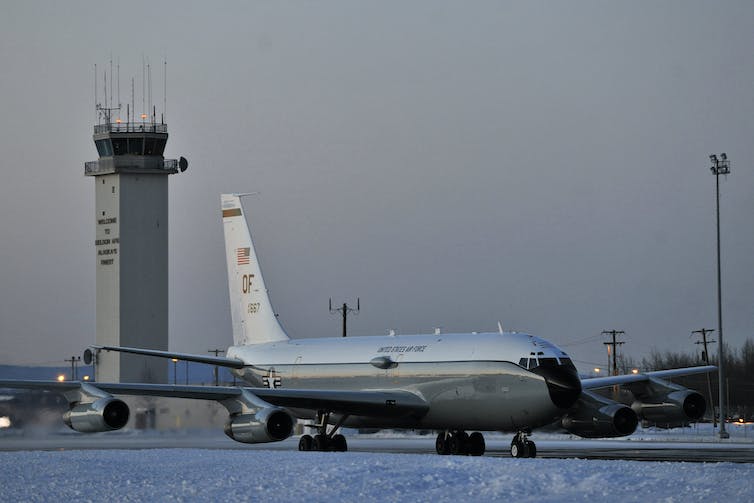 A WC-135 Constant Phoenix from the 45th Reconnaissance Squadron taxis in on the flightline. US Airforce/Staff Sgt. Christopher Boitz

Sniffer planes like Constant Phoenix can be rapidly deployed soon after a reported nuclear test and have been used to verify nuclear tests in North Korea in the past.

This year, Constant Phoenix has reportedly been deployed in Okinawa, Japan and has had encounters with Chinese jets.

On the ground, the Comprehensive Test Ban Treaty Organisation (CTBTO) operates 80 ground-based monitoring stations across the globe that constantly monitor the air for fission products that have dispersed through the atmosphere.

Japan and South Korea operate their own radiation monitoring networks. These networks will also presumably be looking for signatures of the latest North Korean test.

What can fission fragments tell us?

When a nuclear test occurs underground, the fission fragments are trapped except for noble gasses.

Because noble gasses don’t react chemically (except in extreme cases), they diffuse through the rock and eventually escape, ready to be detected.

In particular, some radioactive isotopes of the chemical element xenon are useful due to the fact these isotopes of xenon don’t appear in the atmosphere naturally, have decay times that are neither too long nor too short, and are produced in large quantities in a nuclear explosion. If you see these isotopes, you know a nuclear test occurred. 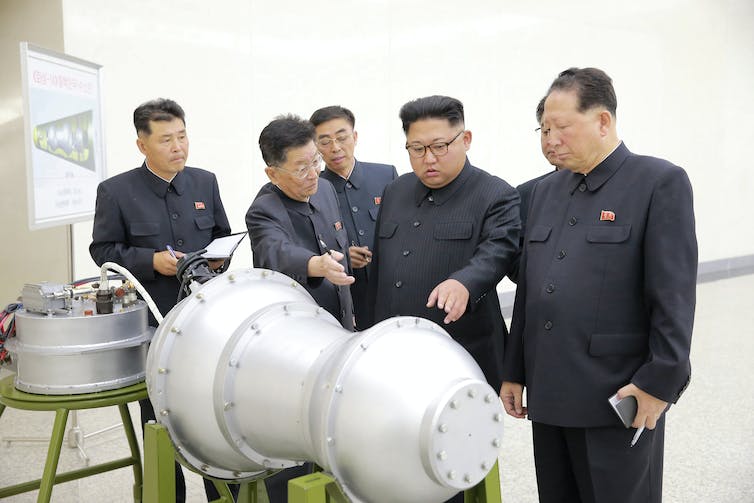 North Korean leader Kim Jong Un and weapon as reported by KCNA. Is this what exploded? Sniffer planes can’t tell us this. KCNA

Something happened during this test that has people excited — there was an additional magnitude 4.1 tremor around eight minutes after the initial tremor, according to the United States Geological Survey. Among other things, this may indicate that the tunnel containing the bomb collapsed. If this happened, then other fission products and other radioactive isotopes could escape as dust particles.

This might have been accidental or deliberate (to provide proof to international viewers), but in either case, we may learn a lot, depending on how fast the sniffer planes arrived and how much dust was released.

Crucially, by looking for isotopes that could only be produced in a high intensity high energy neutron flux, we could suggest whether or not the bomb was indeed a hydrogen bomb.

What can’t they tell us?

But fission fragment measurements probably can’t tell us whether the bomb tested was small enough to fit on an Intercontinental Ballistic Missile (ICBM). After all, it’s easy enough for North Korea to show a casing in a staged photograph and blow up something else.

Whether or not North Korea has a thermonuclear device that is capable of being mounted to an ICBM is a question weighing heavily on the minds of the international community.

Sniffer planes and the CTBTO network will be wringing all of the data they can out of the debris in the atmosphere to help the world understand the nuclear threat from North Korea.

What Can Actually Trigger War on The Korean Peninsula?

Las Vegas: Police Kill Attacker After Most Deadly US Shooting

Las Vegas: Police Kill Attacker After Most Deadly US Shooting