US Observes Activity at Syrian Air Base Used in Chemical Attack

US Observes Activity at Syrian Air Base Used in Chemical Attack

The United States says it has detected potential preparations for a chemical attack at Syria’s Shayrat airfield, which was used in April to launch a chemical attack that killed more than 80 people in Khan Sheikhoun.

The Syrian activity involved specific aircraft in a specific hangar known to be associated with chemical weapons use, according to Pentagon officials. 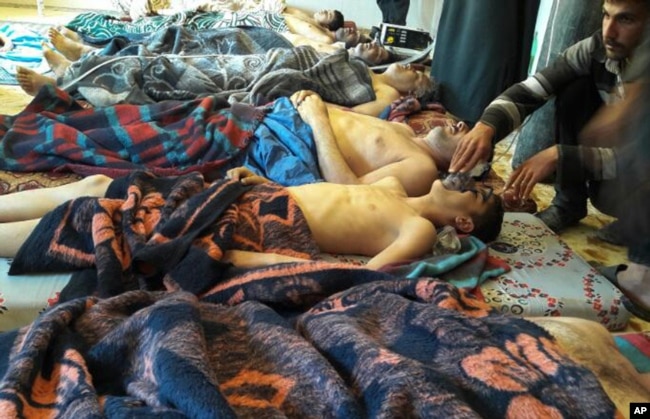 FILE – Victims of the chemical weapons attack lie on the ground in Khan Sheikhoun, in the northern province of Idlib, Syria, April 4, 2017.

After the chemical weapons attack in April, which killed more than 80 civilians, the U.S. struck Shayrat Air Base with dozens of Tomahawk cruise missiles, destroying and severely damaging about 20 aircraft, aircraft storage facilities, ammunition supply bunkers and radars. Analysis by the French government found sarin gas was used in the April attack, along with a stabilizer known as hexamine.

White House press secretary Sean Spicer said late Monday the United States had identified “potential preparations” for a chemical attack and warned that if Syrian forces carry out another chemical attack, they would “pay a heavy price.”

Galloway called past use of chemical weapons by Syrian President Bashar al-Assad’s regime “a clear threat to regional stability,” and said the mere presence of chemical weapons in Syria raises concerns for the U.S. because they could fall into the hands of terrorist groups operating there.

A senior U.S. official told VOA the White House statement was prompted not only by fears a strike would lead to mass civilian casualties, but that a chemical attack might also be used to target rebel allies of the U.S. in eastern Syria. The official spoke on the condition of anonymity as he’s not authorized to speak to the media.

Eastern Syria is fast becoming an international flashpoint where rival foreign-backed forces are scrambling to seize territory from the Islamic State terror group.

The U.S. ambassador to the U.N., Nikki Haley, told members of Congress on Tuesday the fight in Syria is now more complex due to the number of countries involved in the conflict. She said America had received praise from other ambassadors after the strike on Shayrat airfield in April, and she said any further chemical attacks carried out by the Assad regime would be met with similar aggressiveness.

“The warning that the president put out last night … is very much letting them know that we’re not going to give you a path for using chemical weapons on men, women and children,” Haley said during testimony before the House Appropriations Committee.

Russia and Iran are Assad’s main backers, and have provided military support in the complex fight against both rebels and Islamic State militants.

Russian presidential spokesman Dmitry Peskov told reporters Tuesday that threats against the Syrian leadership are “unacceptable,” and that he did not know of any information about a threat for a chemical attack.

Regional analyst Anthony Billingsley of the University of New South Wales told VOA he fears another retaliatory strike could be “a much more serious danger.”

“We’re now starting to add to the sort of militarization of this particular tension between governments, and that’s very worrying because these things can suddenly lose control and get out of hand,” Billingsley said.

U.S. Secretary of Defense Jim Mattis declined to discuss the intelligence that prompted the White House warning as he flew to Europe for a NATO meeting.

Mattis stressed the American military was not going to get drawn into the Syrian civil war, but noted that “if somebody comes after us, bombs us or takes a heading on us or fires on us, then under legitimate self-defense, we’ll do whatever we have to do to stop it.”