Comey has said the president urged him to curb the agency’s investigation into Russia’s meddling of the 2016 presidential election, which Trump denies.

Trump wrote on Twitter: “With all of the recently reported electronic surveillance, intercepts, unmasking and illegal leaking of information, I have no idea whether there are ‘tapes’ or recordings of my conversations with James Comey, but I did not make, and do not have, any such recordings.”

In Beijing, Trump Presses China on North Korea and Trade

The tweet ended weeks of uncertainty about whether the president had installed a White House taping system and recorded two private conversations he had with Comey.

“I don’t know it was a game,” White House Deputy Chief Spokesperson Sarah Huckabee Sanders said when asked why the president waited 41 days to clarify there were no tapes of his conversations with Comey.

“You guys asked for an answer, he gave you one,” added Sanders at an off-camera briefing shortly after the president tweeted on the topic.

A hack of the Democratic National Committee email in 2016 was “all a big Dem HOAX!” the president also tweeted from his personal @realDonaldTrump account.

When asked whether the president believes members of the intelligence community are colluding with Democrats, Sanders responded the president was referencing his belief “they’re trying to delegitimize his win in the election process.”

Asked whether the president believes U.S. intelligence agencies are trying to surveil him in the Oval Office, Sanders replied “Not that I’m aware of.”

Trump hosted a private White House dinner for Comey shortly after taking office in January and the president reportedly asked Comey for his pledge of loyalty, which Comey said he did not give.

At a later meeting with Trump in mid-February, Comey told a Senate panel last month that the president told him he hoped that he could “let go” of an investigation of former National Security Advisor Michael Flynn and his contacts with Russia’s ambassador to Washington.

A day earlier,Trump had fired Flynn after learning that the former aide lied to Vice President Mike Pence about his contacts with Moscow envoy, Sergey Kislyak.

Trump, on May 12, tweeted that Comey had “better hope that there are no ‘tapes’ of our conversations before he starts leaking to the press.” 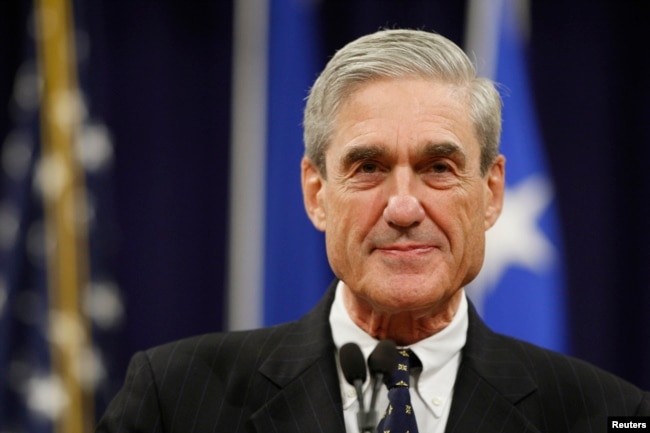 FILE – Robert Mueller pauses during his remarks at a farewell ceremony held for him at the Justice Department in Washington.

Shortly after Comey’s firing, the Deputy Attorney General Rod Rosenstein named another former FBI Director, Robert Mueller, as special counsel to conduct a criminal investigation into whether Trump and his aides illegally colluded with Russian officials to help him win the election and whether the president obstructed justice by firing Comey when he was heading the Russia probe before Mueller took over.

Some lawyers have raised the question about whether that tweet could expose the president to an obstruction of justice case as Trump’s words might be interpreted as pressure on Comey not to discuss their conversations.

“On its own, this whole scenario could be chalked up to Trump’s typical bluster,” said Bradley Moss, an attorney specializing in national security and federal employment law.

However, when viewed in the context of all the remarks the president has made in public and the alleged comments in private to various officials, “this attempt to potentially intimidate a significant witness like Mr. Comey certainly will be a matter of investigative interest for the special counsel,” Moss, the deputy executive director of the James Madison Project, told VOA. 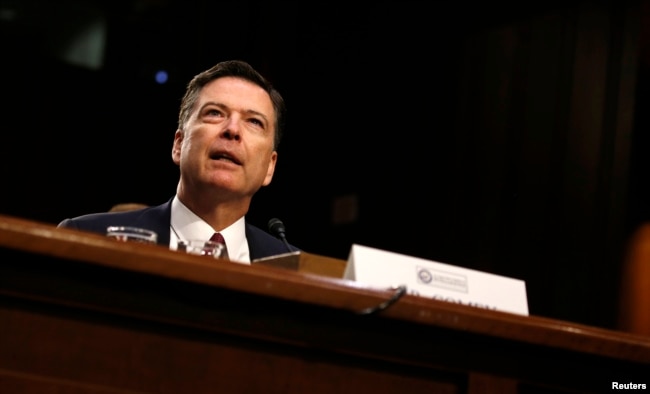 Comey, in testimony before the Senate Intelligence Committee, recounted in detail nine conversations, most of them phone calls, he had with Trump before the president fired him. In one of the last, Comey said Trump asked him to “lift the cloud” of the Russian investigation.

In January, Trump acknowledged Russian hacking into computers at Democratic national headquarters and the subsequent release of thousands of emails that embarrassed Trump’s challenger, Democrat Hillary Clinton, in the weeks before the November election.

But Trump has since then been dismissive of Mueller’s and congressional investigations into the Russian interference in the election, saying they are an excuse by Democrats to explain Clinton’s upset loss.

Trump’s reference to tapes have evoked memories of secret White House recordings during the presidency of Richard Nixon.

Those tapes implicated Nixon in a cover-up of a burglary of the Democratic Party’s headquarters in the Watergate building, compelling him in 1974 to become the first American president to resign.