Trump to CIA: ‘I Am So Behind You’

Trump to CIA: ‘I Am So Behind You’

President Donald Trump, who has sharply criticized the U.S. intelligence community, told workers at the Central Intelligence Agency (CIA) on Saturday, “I am so behind you.”

Trump delivered remarks at the agency’s headquarters in Langley, Virginia, on Saturday, his first full day as U.S. president. “I know maybe sometimes you haven’t gotten the backing that you wanted and you’re going to get so much backing. Maybe you’re going to say, ‘please don’t give us so much backing,'” said the newly sworn-in leader, prompting laughter.

CIA officials said about 400 CIA staff members were present for the president’s remarks.

Trump made clear the fight against Islamic State will be a top priority and that his administration will ramp up America’s approach.

ISIS is an acronym for Islamic State.

The president’s visit was an apparent bid to mend fences and meet with top security officials, according to analysts.

“It’s kind of an olive branch for the intelligence community,” said Aki Peritz, a former CIA counterterrorism analyst and coauthor of Find, Fix, Finish: Inside the Counterterrorism Campaigns That Killed bin Laden and Devastated Al Qaeda.

Intelligence officials have argued that Trump’s disparaging remarks about spy agencies and their work has hurt staff morale.

“The CIA employees are all pretty smart people, they’re professionals, they’re well-educated,” said Peritz. “One kumbaya speech is not going to really change their grave concerns that they’re having with the current president.”

For months, Trump refused to side with CIA and Federal Bureau of Investigation (FBI) conclusions that Russia hacked the Democratic National Convention in a bid to meddle in U.S. elections, in part to boost his chance of winning. 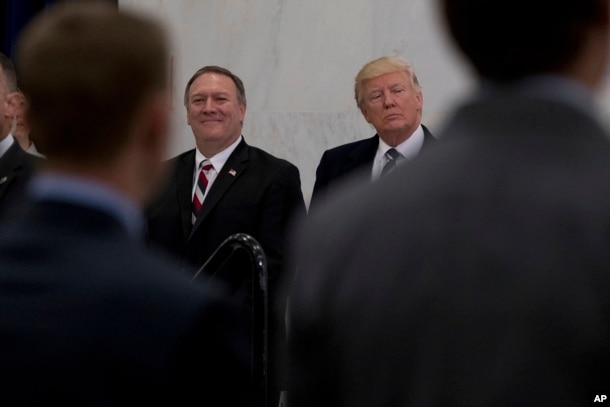 It was not until a January 11 press conference that Trump conceded “I think it was Russia” who carried out the DNC hacking, but later added it may have also been someone else, including China.

The new U.S. president has continued to reject claims Moscow carried out the attacks to undermine his former Democratic rival Hillary Clinton and to help propel him in the White House.

He has also repeatedly noted the agencies’ previous errors and suggested the U.S. intelligence community may have leaked an unsubstantiated report that Russia has compromising information about him.

During his remarks Saturday, Trump said the reason for his stop is his “long-running war with the media,” whom he said “made it sound like I had a feud with the intelligence community.”

Trump’s CIA visit comes after congressional Democrats succeeded in stalling until Monday Senate consideration of Trump’s choice for CIA director, Representative Mike Pompeo. Republican lawmakers denounced the delay and noted that it leaves the spy agency leaderless over the weekend.

Trump hailed Pompeo, telling CIA staff his nominee is the clear choice for the job.

Another former CIA official questioned why the president visited the agency on a weekend. Typically, such visits are made during the week when the greatest number of workers are present. Often, a receiving line is also formed to greet staff members.

“There’s a real effort orchestrated so that it is a morale-boosting visit,” said Carmen Medina, former CIA Deputy Director of Intelligence.

“It’s conceivable that it could be about some sort of national security and intelligence issue, that either the president has requested a briefing or the intelligence community has suggested he receive a briefing,” she said. 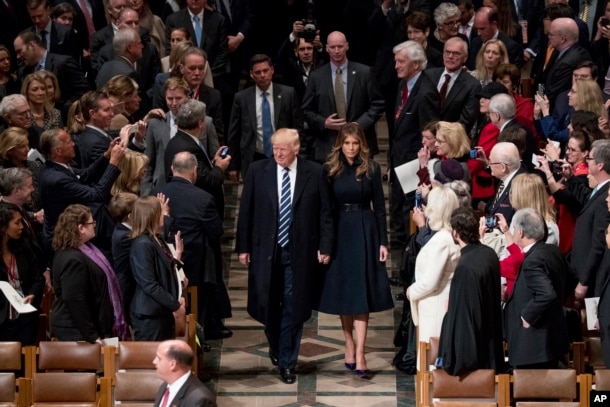 Before his visit to the CIA, the newly-installed president — along with his family and Vice President Mike Pence and Pence’s wife, Karen — attended a prayer service at Washington National Cathedral.

Early Saturday, Trump took to Twitter to express gratitude to the American people for participating in Friday’s inauguration activities and to thank the news media for the generally favorable reviews of his inauguration speech.