Mahathir Mohamad picks up defectors for his new party

Strait Action: China’s maneuvering in the Strait of Malacca

President Donald Trump on Friday began rolling back some of his predecessor’s actions that were meant to engage Cuba after more than a half-century of isolation by the United States.

“We will not be silent in the face of communist oppression
any longer,” the president said, announcing that effective immediately, the U.S. will enforce the ban on tourism and ban doing business with the island nation’s military conglomerate, GAESA, which is estimated to control more than half of the Cuban economy.

“The policy directs the creation of new regulations so the actual impact occurs when those regulations go into effect,” a senior White House official told reporters on Thursday evening.

Why another global conflict is unlikely soon

Democrats call on U.S. diplomats to testify over Trump-Ukraine efforts

The policy was unveiled by the president in Miami’s Little Havana District Friday and the clock will start immediately on the drafting of regulations.

“The driver of Trump’s policy is that the actions taken by the previous administration of Barack Obama were enriching the Cuban military and intelligence services,” said the senior White House official.

Washington hopes the “Cuban regime will see this as an opportunity to change reforms that they paid lip service to a couple of years ago, but has not been implemented to the benefit of the Cuban people,” said the official.

Measures will be enacted to restrict the flow of money from the United States to Cuba and the existing statutory ban on tourism will be strictly enforced, effectively “ending individual people-to-people travel,” meaning that any American going to the island will have to be part of a group, a U.S. official explained. 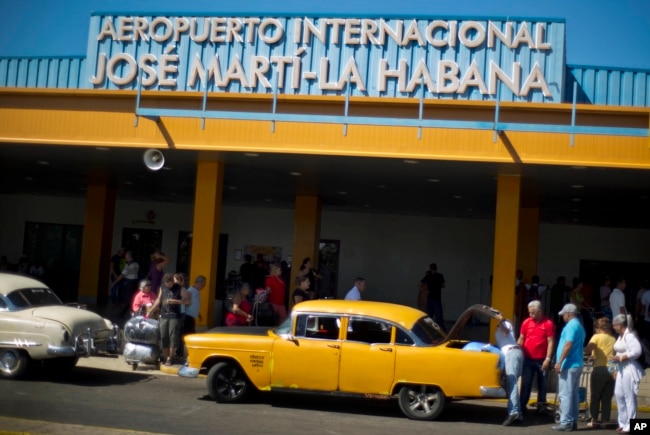 People put their luggage in a private taxi as they arrive from the U.S. to the Jose Marti International Airport in Havana, Cuba, Sept. 1, 2014.

Supporters of President Obama’s opening to Cuba say reinstating tougher travel and business restrictions will have the opposite of their intended effect.

Brett Bruen, who as director of global engagement in the Obama administration played a role in loosening the policy of isolating Cuba, said Trump’s policy will not only set back relations with Cuba, but with much of Latin America.

“For decades our policy was a hindrance to efforts to forge closer ties with countries across the hemisphere, and under President Obama’s leadership, we were able to take that obstacle off the table and to engage more effectively in countries like Brazil, Nicaragua, Honduras,” Bruen said. “Returning to the days of barriers and blockades will hurt American foreign policy, it will hurt American companies, and ultimately we will bear the brunt of the consequences.” 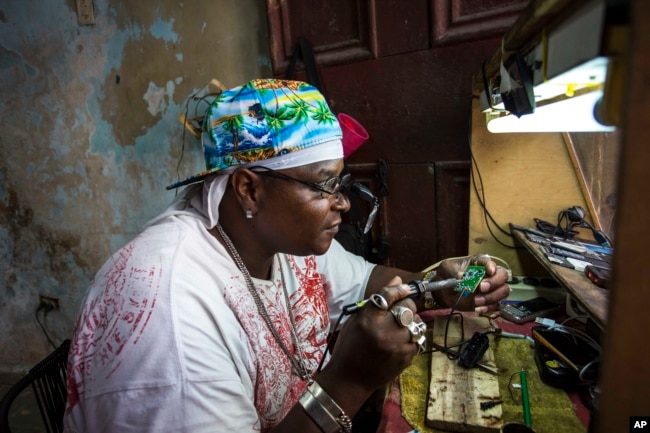 Private jeweler and electronics technician Gabriel La O repairs a mobile phone inside a government store where he rents work space in Havana, May 24, 2016. Cuba says it will legalize small and medium-sized private businesses.

There will be no intention in new regulations to be drafted “to disrupt the existing business that has occurred” – intended to give relief to Americans who have made significant recent investments in Cuba – and “there aren’t any changes on regulations for Americans to legally bring back such popular items as rum and cigars, according to a White House official.

U.S. officials say the president is keeping a campaign promise to crack down on Cuba due to increased human rights abuses.

The Trump administration has been criticized for not taking a consistent approach on human rights globally.

A senior administration official Thursday rejected that charge, saying Cuba is being singled out because it’s “a repressive regime in this hemisphere.”

But Marguerite Jimenez, senior associate for Cuba at the Washington Office on Latin America, called the policy reversal “fundamentally misguided.”

“There is no question that Cuba ought to do more to permit its citizens full freedom of expression and association,” Jimenez said. “However, a return to failed policies of the past will inevitably halt progress and only make life more difficult for Cubans on the island.”

Subsequent decades of sanctions failed to remove Castro and his brother, Raul, from power. 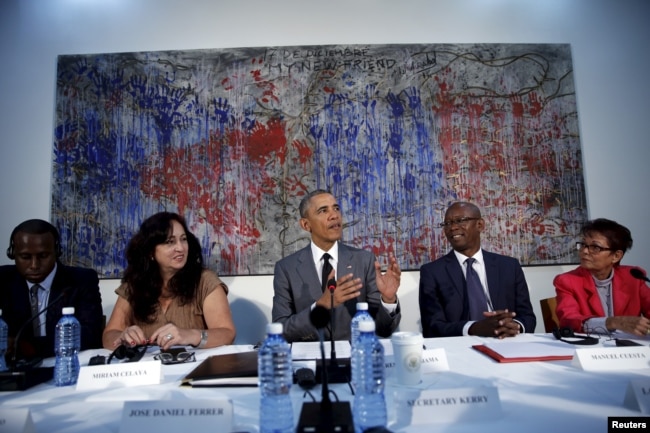 U.S. President Barack Obama attends a meeting with Cuban dissidents at the U.S. embassy in Havana, Cuba, March 22, 2016. On the wall behind Obama is a painting, “My New Friend,” donated to the embassy by Michel Mirabal, a Cuban artist.

Obama re-established diplomatic relations, a move that will not be affected by Trump’s measures.

There will also be no return to the so-called “wet-foot, dry-foot” policy, which Obama ended after 20 years shortly before he left office in January.

Its end meant that Cuban nationals who were able to touch American soil could stay and become permanent residents after one year while those caught at sea were returned to the island nation.

At least three members of a family were injured in a sectarian attack on Shias attending a pre-wedding celebration...