U.S. President Donald Trump on Saturday said that during the APEC Summit in Vietnam he had “two or three very short conversations” with Russian President Vladimir Putin, centering on the situation in Syria.

Trump, speaking to reporters on Air Force One as it flew from Danang to the Vietnamese capital of Hanoi, said a joint statement on Syria he agreed to issue with Putin is “going to save a tremendous number of lives.”

The statement, first released by the Kremlin, says the two leaders “confirmed the importance of de-escalation areas as an interim step to reduce violence in Syria, enforce cease-fire agreements, facilitate unhindered humanitarian access, and set the conditions for the ultimate political solution to the conflict.”

It also says that Putin and Trump “agreed to maintain open military channels of communication between military professionals to help ensure the safety of both U.S. and Russian forces and de-confliction of partnered forces engaged in the fight against ISIS.”

Putin told reporters in Danang Saturday the joint statement is one of extraordinary importance, confirming the principles of the fight against terrorism.

“They’re political hacks. So you look at it, and then you have Brennan, you have Clapper and you have [James] Comey. Comey’s proven now to be a liar and he’s proven to be a leaker,” he said, referring to the FBI’s former director, who was fired early in Trump’s presidency amid much controversy.

“So you look at that. And you have President Putin very strongly, vehemently says he had nothing to do with that,” Trump said. 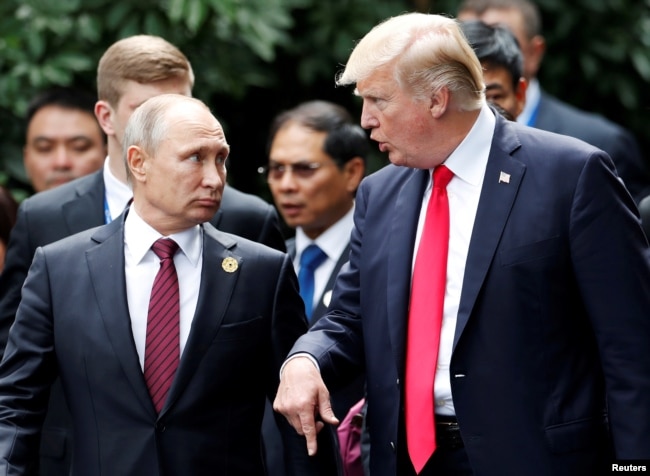 Putin, in Danang, asserted there is no confirmation of Russian meddling in the election in which Trump defeated Democratic nominee Hillary Clinton and that there never will be any confirmation.

Trump, on Air Force One, said the United States could be helped a lot by Russia on the North Korean nuclear issue.

“You know, you are talking about millions and millions of lives. This isn’t baby stuff, this is the real deal. And if Russia helped us in addition to China, that problem would go away a lot faster.”

But Trump said, concerning the North Korea nuclear and ballistic missile issue, “I did not speak to President Putin about it, because we just had these little segments where we were talking about Syria.”

Putin, in his remarks to the media, said, “We discussed all we wanted” at the APEC Summit, but unfortunately there was little time to speak in detail. He added that it would be good for Russian and American teams to sit down to talk about the whole breadth of the bilateral relationship.

Putin described Trump as a comfortable person, educated, and said he and the U.S. president were highly civil in their interactions.

The Russian leader warned, however, that action is likely to be taken against U.S. media in response to an American requirement that Russia’s RT media outlet register as a foreign agent in the United States.

Putin termed it an attack on free speech by the U.S. government, and he warned retaliatory measures will be proportionate and reciprocal.

CNN, Radio Free Europe/Radio Liberty and the Voice of America have been mentioned by Russian officials and media reports as the most likely targets of the retaliation.