President Donald Trump, in a defiant speech at a West Virginia rally Thursday night, called stories about his campaign’s alleged ties to Russia “a total fabrication” that makes his political opponents feel better about themselves after their loss of last year’s election.

Special Counsel Robert Mueller has seated a grand jury, The Wall Street Journalreported hours earlier, significantly stepping up his probe into Russian interference in the election.

“They’re trying to cheat you out of the leadership you want with a fake story,” Trump said to cheers in Huntington. “That is demeaning to all of us.”

Trump said of the investigations by the special counsel: “I just hope the final determination is a truly honest one.”

The president added that what “the prosecutors should be looking at are Hillary Clinton’s 33,000 deleted e-mails.”

The president’s remarks came as analysts and political commentators emphasized the seriousness of the special counsel putting in place a grand jury in the nation’s capital.

“If, in fact, Mueller has impaneled a grand jury, it likely signals that he has significant evidence that would point in the direction of a crime having been committed,” Professor Anthony Clark Arend, who is the senior associate dean of Georgetown University’s School of Foreign Service, told VOA.

Reuters news agency reports the grand jury has already issued subpoenas in connection with the June 2016 meeting involving a Russian lawyer and others held with the president’s son, Donald Trump Jr., and other top campaign officials. Some have asserted the meeting indicates possible collusion between Russia and the Trump presidential campaign. 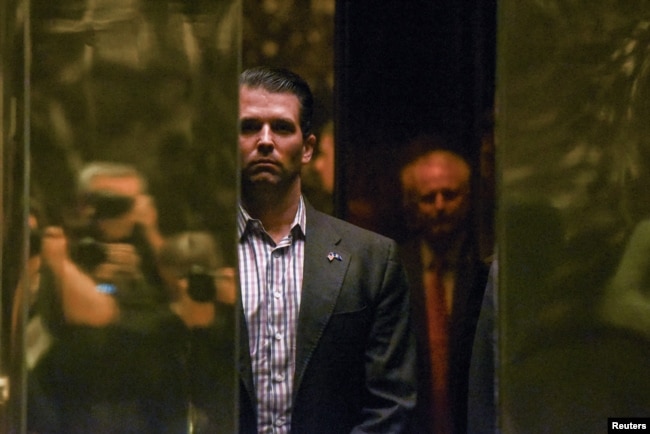 Reports indicate the younger Trump jumped at the idea of a meeting when the lawyer told him, through an intermediary, that she had incriminating evidence against Clinton.

Trump has cast doubt on whether the Russians tried to interfere in the election, despite intelligence reports that the Kremlin sought to manipulate the election in the Republican nominee’s favor.

Russia has denied any meddling and Trump has consistently denied any collusion. He has called Mueller’s probe “a witch hunt” and there has recently been speculation in Washington the president may try to fire the special counsel.

The president’s special counsel, Ty Cobb, in a statement released by the White House on Thursday, said he is unaware of a grand jury probe, but “the White House favors anything that accelerates the conclusion of his work fairly … the White House is committed to fully cooperating with Mr. Mueller.”

Now that a grand jury has reportedly been seated, it could seek to subpoena Trump family financial records. The president has warned Mueller to stay away from his finances.

CNN reported Thursday that Mueller’s probe had crossed that red line, expanding to examine “possible financial crimes, some unconnected to the 2016 election.”

The president did not respond, as he walked from the Marine One helicopter to the South Portico late Thursday, when VOA asked him, “Did Mueller cross the red line?”

Mueller, a former FBI director took over the Russia probe after Trump fired FBI Director James Comey in May when Comey apparently refused the president’s request to back down from the investigation.

Two U.S. senators on Thursday introduced a bill to make it difficult to fire a special counsel.

The proposal, by Democrat Chris Coons and Republican Thom Tillis, would prohibit a president from firing the investigator except for misconduct, conflict of interest, severe illness or another good cause.

A three-judge panel would determine if the firing was justified.

The law is apparently an effort to protect Mueller from any attempt by Trump to remove him. Some analysts had said that if the president wanted to fire Mueller, the proposed legislation might have prompted him to do it before the Senate had a chance to vote on the new law.

The Senate, which began its August recess Thursday evening, blocked Trump from making any appointments during the summer break by agreeing to a series of pro forma sessions — brief meetings that technically keep the Senate in session. Lawmakers are due back in Washington in early September.

Senators took the action after Trump’s recent criticism of Attorney General Jeff Sessions sparked speculation that he might fire Sessions during the summer recess.

Trump sent several tweets last week lambasting his attorney general, who had recused himself from the ongoing Russia investigation. The president, who cannot fire the special counsel himself, could have then appointed a replacement who could then have fired Mueller.

Pro forma sessions have been used for decades to block recess action, including last year when the Senate used the brief meetings to prevent former President Barack Obama from filling a vacant seat on the Supreme Court.