U.S. President-elect Donald Trump’s pick for defense lashed out against Russia during his Senate confirmation hearing Thursday, despite Trump’s softer approach to Moscow.

Retired General James Mattis, the nominee for defense secretary, told the Senate Armed Services Committee that Russia is the “principal threat,” and that the U.S. has seen little success from years of trying to positively engage.

The retired general served as the commander of U.S. Central Command and was NATO’s Supreme Allied Commander for transformation while in uniform.

Speaking Thursday, Mattis called for greater military support for European allies as Russia attempts to “break” up NATO, the north Atlantic alliance that Trump has called “obsolete” and expensive.

“My view is nations with allies thrive, and nations without allies don’t. And so I would see us maintain the strongest possible relationship with NATO,” Mattis said.

He described the world order as “under the biggest attack since World War II” due to aggressive actions from Russia, from terrorist groups, and from Chinese actions in the South China Sea.

Sen. John McCain, a Republican from Arizona, the chairman of the Senate Armed Services Committee, asked Mattis if America has a strong enough military to be able to deter those threats.

The former four-star general is inheriting two wars against extremists if confirmed. In Afghanistan, he said the Taliban has eroded some coalition successes.

And when it came to the more than 2-year fight against Islamic State, he said the battle to take the terror group’s de facto capital, Raqqa, could change.

“That strategy needs to be reviewed and perhaps energized on a more aggressive timeline,” Mattis said.

The committee overwhelmingly passed a waiver excepting the retired general from a rule requiring seven years out of uniformed military service before becoming defense secretary. The law is meant to assure the American principle of civilian leadership of the military. 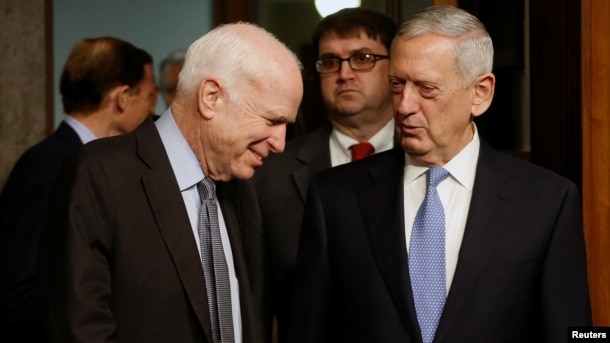 Only three senators on the committee voted down the waiver, but even they showed some support for Mattis. Democratic Senator Richard Blumenthal of Connecticut, one of the three who opposed the waiver, told the retired general that “if there were ever a case for a waiver of that principle, it is you, at this moment in our history.”

Democrats think Mattis will be a strong check to Trump’s unpredictable nature, and the waiver passed the full Senate later Thursday by a vote of 81-17.

In the House, however, the battle to secure a waiver for Mattis sparked one of the first clashes between the Trump administration and House Democrats. The vote fell along party lines in the House Armed Services Committee, passing 34-28, after the Trump transition team unexpectedly canceled the nominee’s planned visit.

“That is a large mistake,” Congressman Adam Smith, the ranking Democratic member of the committee, said of the decision.

Republicans on the committee said it was important to advance the retired general’s nomination process to ensure a new secretary of defense is in place at the beginning of a new presidential administration. 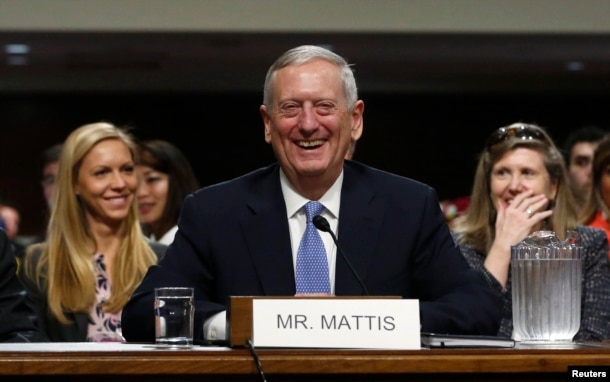 “This is an extraordinary circumstance and individual that warrants a one-time exception,” said Chairman Mac Thornberry, a Republican from Texas, speaking in support of the waiver even as he said he wished the general had been allowed to attend and answer questions from the committee.

Rep. Scott Peters, a Democrat from California, told VOA he was disappointed by the vote along party lines and was concerned that the Trump transition team’s refusal to allow Mattis to attend the hearing set an unfortunate precedent for the incoming administration’s relationship with the House of Representatives.

“I think it’s off to a bad start,” Peters said. “The general himself was willing to testify and showed respect to the committee and to the House to make himself available, and the transition for some reason said they’re too good for that or it’s not important. I don’t think that is a message we should have accepted.”

The full vote will go to the House floor on Friday, with many Democrats expected to vote down the spending bill in protest of the Mattis waiver provision.