Trump made the comment Wednesday in the Oval Office, sitting alongside former Secretary of State Henry Kissinger.

Earlier, on the Twitter social media platform, the president contended that Comey had lost the confidence of “everyone in Washington, Republican and Democrat alike.”

In a series of Wednesday morning tweets, Trump said Comey “will be replaced by someone who will do a far better job, bringing back the spirit and prestige of the FBI.”

Vice President Mike Pence defended the president’s move Wednesday, saying Trump “made the right decision at the right time” when he fired Comey.

The FBI director committed “atrocities in circumventing the chain of command in the Department of Justice,” Sarah Huckabee Sanders, the principal deputy White House press secretary, told reporters Wednesday. “Any person of legal mind and authority knows what a big deal that is.”

Critics of the move to dismiss Comey have said it raises questions about the FBI’s probe into Russian meddling in the November presidential election and possible collusion between Trump campaign aides and Russian interests. Career FBI investigators and others at the Justice Department are “going to be very interested in seeing that this moves forward to the extent that there’s evidence there of any wrongdoing — any connection with Russian involvement,” former U.S. Attorney General Alberto Gonzalez told VOA. “I would call it a dumb move by the president if he thinks he’s going to stop that investigation.”

Senator Dianne Feinstein, the ranking Democrat on the Judiciary Committee, said Wednesday that she was “incredulous” over Trump’s firing of Comey.

The California senator said the appropriateness and timing of the Comey’s dismissal could implicate the administration and called for the matter to be addressed.

Trump, in a blunt letter to Comey on Tuesday, told him: “You are hereby terminated and removed from office, effective immediately.” The president added that Comey “is not able to effectively lead the bureau.”

The administration’s reasons for Comey’s removal were outlined in two separate letters written by Attorney General Jeff Sessions and his deputy, Rod Rosenstein.

Comey “made serious mistakes” handling the conclusion of the investigation of emails of Trump’s general election opponent, Hillary Clinton, Rosenstein wrote. He also accused the former FBI director of usurping the attorney general’s authority when Comey concluded there should be no prosecution of the former secretary of state.

Jason Chaffetz, chairman of the House Oversight and Government Reform Committee, wrote a letter Wednesday to the FBI’s inspector general asking that a review of the agency’s actions in relation to the election be expanded to include an investigation of Comey’s dismissal.

The only other FBI director to ever be fired was William Sessions, who was dismissed by President Bill Clinton in 1993. Clinton named a replacement the next day. Trump has not yet announced a nominee, who will need to be confirmed by the Senate.

A Republican member of the Senate Judiciary Committee, Lindsey Graham of South Carolina, said that “given the recent controversies surrounding the director, I believe a fresh start will serve the FBI and the nation well.”

But other Republican members of Congress suggested the president’s action caused a breach.

Richard Burr of North Carolina, chairman of the Senate Select Committee on Intelligence, said he was “troubled by the timing and reasoning” of the Comey firing. He called the dismissal “a loss for the bureau and the nation.”

John McCain, an Arizona Republican who sits on the Homeland Security and Government Affairs Committee, said in a statement that “while the president has the legal authority to remove the director of the FBI, I am disappointed in the president’s decision to remove James Comey from office.”

Another Republican senator from Arizona, Jeff Flake, said on Twitter that he “had spent the last several hours trying to find an acceptable rationale for the timing of Comey’s firing. I just can’t do it.”

Representative Justin Amash, a Michigan Republican and member of the conservative House Freedom Caucus, said on Twitter that he was “reviewing legislation to establish an independent commission on Russia.”

Amash also termed as “bizarre” Trump’s reference in the termination letter to Comey that the FBI director had assured the president repeatedly that the U.S. leader himself was not under investigation.

Democratic members of the Senate Judiciary Committee called Trump’s action “Nixonian” — a reference to President Richard Nixon’s firing of officials investigating him during the Watergate scandal in the early 1970s.

Democratic senators on Wednesday called for appointment of a special prosecutor to continue the Justice Department’s investigation into alleged ties between Trump’s presidential campaign last year and Russia.

On the Senate floor, Dick Durbin, an Illinois Democrat who is a member of the Judiciary Committee, said any attempt to halt or undermine the FBI’s investigation into Russian interference in the presidential campaign “would raise grave constitutional issues.”

George Washington University law professor Jonathan Turley told VOA, “The Rosenstein memorandum is based on long-standing principles governing criminal investigations, but the timing — that is so problematic and concerning.”

The Washington Post, citing an anonymous source, reported early Thursday that Rosenstein threatened to resign when he found out that the White House was portraying him as the primary person who wanted to fire Comey, and that the president was merely following his recommendation.

Former FBI head Comey sent a letter, which was obtained by CNN, to friends and agents. 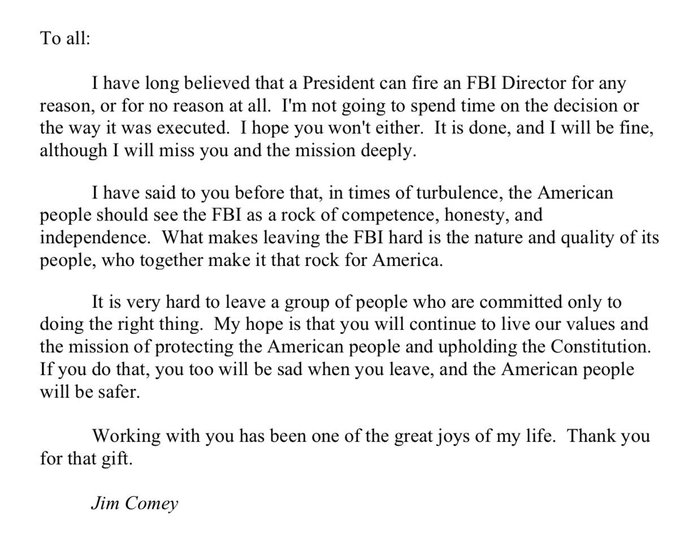 In the statement, Comey said he did not plan to dwell on Trump’s decision to fire him or the “way it was executed.”

“I have long believed that a president can fire an FBI director for any reason, or for no reason at all,” he wrote. “…It is done and I will be fine.”

He added that he would miss the FBI’s mission “deeply.”