In early morning Twitter comments, Trump said he wanted to pass on “facts pertaining to terrorism and airline flight safety” as he met in the Oval Office with Russian Foreign Minister Sergey Lavrov and Moscow’s U.S. ambassador, Sergey Kislyak, and urge Russia to “greatly step up up their fight” against Islamic State and terrorists.

Trump appeared to be boasting about inside knowledge of a looming threat to aviation, according to the Washington Post.

The New York Times reported that the information, which was deemed to be especially sensitive, had not even been shared widely within the U.S. government or shared with other allies.

The two newspapers, and others, further said the information could jeopardize a critical source of intelligence about Islamic State and the manner in which it was collected.

A U.S. president has the power to declassify nearly any information, so what Trump did does not appear to be illegal. But intelligence officials, quoted by the newspapers, expressed concern that the information, provided by a U.S. partner government, could harm crucial relationships.

As he defended his disclosure Tuesday, Trump also said that from the beginning of his administration in January he has been pressuring the Federal Bureau of Investigation and others in the U.S. government “to find the LEAKERS in the intelligence community.” After-the-fact published reports of Trump’s interactions with foreign leaders have at times angered him.

U.S. National Security Adviser H.R. McMaster and other members of Trump’s administration denied the accuracy of the reports.

The original story, first reported by the Post, “is false,” McMaster told reporters on the White House grounds late Monday. “At no time were intelligence sources or methods discussed and the president did not disclose any military operation that was not already publicly known,” he added.

“I was there. It didn’t happen,” McMaster concluded, then turned around and re-entered the West Wing without answering reporters’ questions. 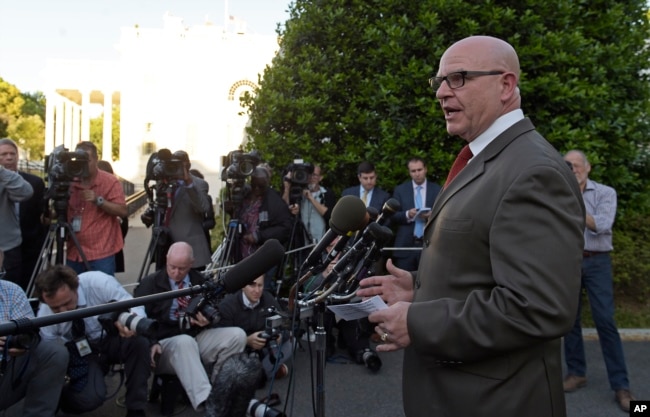 National Security Adviser H.R. McMaster speaks to the media outside the West Wing of the White House in Washington, May 15, 2017.

Secretary of State Rex Tillerson, who said he also attended the May 10 meeting with the Russian foreign minister and Russian ambassador, backed up McMaster’s characterization of the conversation, adding in a statement that “a broad range of subjects were discussed, among which were common efforts and threats regarding counterterrorism.”

Since the early days of the Trump administration, the president’s apparent willingness to work with Russia had some U.S. allies ill at ease.

“It’s a key concern,” a Western diplomatic official who spoke on condition of anonymity told VOA at the time. “Russia has been a very disruptive player.”

But some former intelligence officials think the repercussions from the Oval Office meeting will be minimal, if any.

“No damage – no sources or methods revealed,” said Michael Pregent, a former intelligence officer now with the Hudson Institute, a Washington think tank.

Pregent, who worked with McMaster in Iraq, said it is unlikely the national security adviser would have allowed the president to cross any lines.

Instead, Pregent sees an opportunity to have turned the Russian visit to the White House to Washington’s advantage.

“Sharing this info with the Russians calls them on their inaction against ISIS in Syria,” he said.

“I am shocked by reports that President Trump revealed highly classified information to Russian diplomats last week. This certainly raises questions about whether the president recognizes the serious implications of disclosing such sensitive information to an adversary,” said Democratic Representative Eliot Engel, the ranking member on the House Committee on Foreign Affairs. “I will be meeting later this week with National Security Adviser McMaster in a classified session, and will seek answers about what was revealed and how it could damage American national security.” The vice chairman of the Senate Select Committee on Intelligence, Democrat Mark Warner, said on Twitter that “risking sources and methods is inexcusable, particularly with the Russians.”

Trump’s comments, if true, are a “slap in the face” to the U.S. intelligence community, Warner added.

“The White House has got to do something soon to bring itself under control and in order,” the chairman of the Senate Foreign Relations Committee, Republican Bob Corker, told reporters. “Obviously they’re in a downward spiral right now and they have to figure out ways to come to grips with all that’s happening.”

The story broke as the White House remains embroiled in controversy over last week’s firing by the president of FBI Director James Comey. That occurred one day prior to the Oval Office meeting with the Russians.

The FBI is investigating alleged links between Trump’s 2016 presidential campaign and Russia.

“After an unprecedented week in which many thought it would be impossible for President Trump to be any more irresponsible, he now may have sunk to a dangerous new low,” the two Democrats concluded.