WASHINGTON  —  President Donald Trump declares he is “waiting” to see if North Korean leader Kim Jong Un will again “engage in constructive dialogue.” Trump opened the door for diplomacy Thursday just hours after he canceled the summit with Kim scheduled for next month in Singapore. But he insisted that Kim reach out, placing the blame on the North Korean leader for the collapse of negotiations.

He also said that until that happened, tough sanctions on Pyongyang would continue and the U.S.-led “maximum pressure campaign is continuing.” Trump and Kim had been slated to meet June 12 for what White House officials had hoped would be a historic diplomatic breakthrough for the president. They advised that the summit could be rescheduled.

Trump said in a letter to Kim released by the White House that based on the statement, he felt it was “inappropriate, at this time, to have this long-planned meeting.” He added that the North Koreans talk about their nuclear capabilities, “but ours are so massive and powerful that I pray to God they will never have to be used.”

The North Korean statement that he referred to called Vice President Mike Pence a “political dummy” for his comments on the North and said North Korea is just as ready to meet the U.S. in a nuclear confrontation as at the negotiating table. “Please let this letter serve to represent that the Singapore summit…will not take place,” Trump stated. Trump said in his letter that the world is losing a “great opportunity for lasting peace and great prosperity and wealth” now that their summit has been canceled.

The president agreed to the historic sit-down in March after months of trading insults and nuclear threats with the North Korean leader. But after criticism from North Korea, Trump cast doubt this week on whether the meeting would happen. Secretary of State Mike Pompeo says North Korea did not respond to repeated requests from U.S. officials to discuss logistics for the now-canceled summit between President Donald Trump and North Korean leader Kim Jong Un.

Pompeo told the Senate Foreign Relations Committee on Thursday that the lack of response was an additional reason for Trump’s decision to call off the meeting. Trump cited recent bellicose comments from the North in a letter to Kim released by the White House.

Trump thanks Kim for return of Korean War dead, but doubts remain about disarming

“Pompeo says: “We had received no response to our inquiries from them.”

Pompeo says the North’s attitude changed markedly since he returned from a trip to Pyongyang earlier this month, when he met with Kim and secured the release of three American prisoners being held there. He was involved in discussions late Wednesday and early Thursday that led to President Donald Trump’s decision to pull out of a planned summit. But, he would not say exactly which, if any, other countries were given a head’s up on the decision, including South Korea.

“I don’t want to get into who all we notified,” he told the Senate Foreign Relations Committee, adding: “The White House will speak to that at the appropriate time.” However, Pompeo, who met at the State Department on Wednesday with China’s foreign minister, did say that he had not spoken to Chinese officials since the decision was made. South Korean President Moon Jae-in’s office says it is trying to figure out President Donald Trump’s intentions in canceling a summit next month with North Korea’s leader. 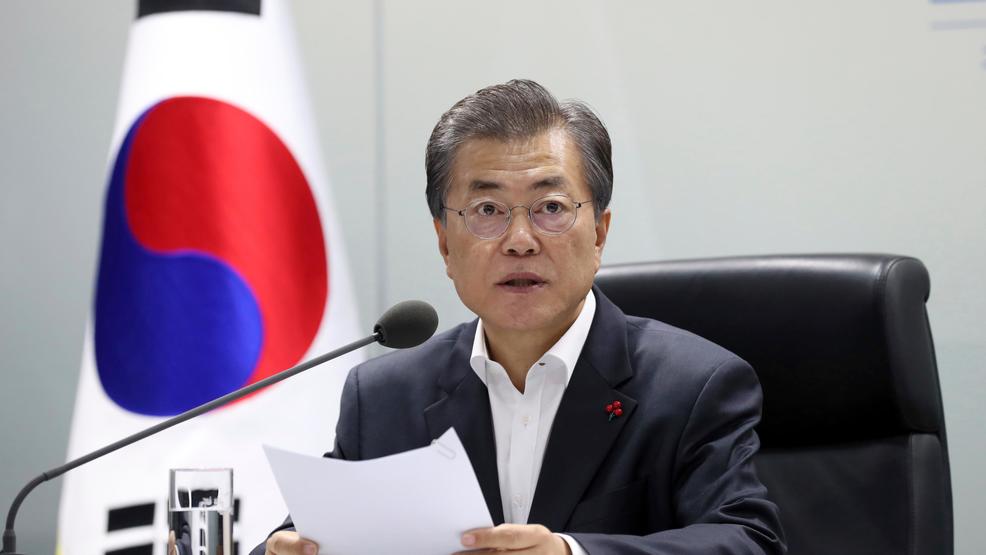 Moon played a prominent role in planning for the summit with Kim Jong Un, which was scheduled for June 12 in Singapore. South Korea’s Yonhap News Agency quoted a presidential office spokesman as saying they “are trying to figure out what President Trump’s intention is and the exact meaning of it.” Lawmakers on Capitol Hill have also issued reactions to the presidents letter. House Speaker Paul Ryan says achieving a peaceful resolution to the nuclear standoff on the Korean Peninsula will require “a much greater degree of seriousness” from Kim Jong Un.

Ryan says in a statement Thursday that Kim’s government has long given ample reason to question its commitment to stability. The Republican says that, until a peaceful resolution is achieved, Congress has provided “significant tools” to hold North Korea accountable. Ryan says the U.S. must continue the “maximum pressure” campaign that Trump and others say brought North Korea to the table in the first place. Republican Congressman from Florida Ron DeSantis also was quick to support Trump’s decision on Twitter.

If it wasn’t going to be productive, @POTUS is right to nix the North Korea summit. Reagan correctly walked out of Reykjavik rather than give away the store. @POTUS isn’t going to allow Kim Jong-Un to get the best of him.

A senior Democratic Sen. Bob Menendez of New Jersey says President Donald Trump’s withdrawal from a planned summit with North Korea shows the consequence of his failure to prepare properly. The top-ranking Democrat on the Senate Foreign Relations Committee says it’s “pretty amazing” that Trump’s Republican administration would be shocked that North Korea “is acting as North Korea might very well normally act.”

The art of diplomacy is a lot harder than the art of the deal.

He adds: “I’m not sure that constantly quoting the Libya model is the diplomatic way to try to get to the results that we seek in North Korea because that didn’t work out too well for Gadhafi.”

Menendez was speaking Thursday at a committee hearing attended by Secretary of State Mike Pompeo. A Republican senator often critical of Donald Trump says the president “made the right call” in canceling a summit with North Korea’s leader.

Sen. Ben Sasse of Nebraska says Kim Jong Un is a “murderous despot and habitual liar.” Sasse is often critical of Trump but is siding with the president on his decision Thursday to pull out of the summit that had been planned for June 12 in Singapore.

Sasse added in a statement that if North Korea wants diplomacy, “it should know that half-measures and spin about its nuclear program won’t cut it.” Sasse is also a member of the Senate Armed Services Committee. The United Nations has also issued a responce stating they are “deeply concerned” by the cancellation of the planned summit between U.S. President Donald Trump and North Korean Leader Kim Jong Un.

U.N. chief Antonio Guterres told an audience at the University of Geneva on Thursday that he was urging the parties to keep working “to find a path to the peaceful and verifiable denuclearization of the Korean Peninsula.” Guterres’ comments came as he laid out his disarmament agenda, warning that nuclear agreements between states have been threatened like never before.