U.S. President Donald Trump has promised “a big decision” on the Paris climate agreement in the next two weeks.

He spoke on his 100th day in office, at a rally in Harrisburg, Pennsylvania. He spoke in an arena that holds up to 10,000 people where his audience was supportive, greeting him with cheers of “USA! USA! USA!”

Early in the president’s speech, a protester was tackled and removed from the audience.

‘I utterly disagree with him!’ New Zealand’s Ardern slams Trump 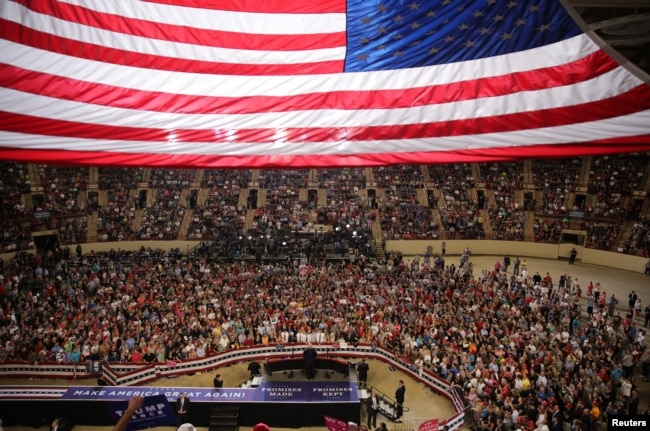 “Get him out of here,” the president said, while the audience cheered again.

The president expressed relief at not having to attend the White House Correspondents’ Dinner, an annual charity event in Washington occurring at the same time as his rally.

He pointed to the media gallery covering his speech and said, “Look at the media back there. They would actually rather be here, I have to tell you,” he said.

The crowd booed at the mention of the media and cheered when Trump named a couple of television networks he considers “fake news.” He said he gives the media “a big, fat, failing grade” for its first 100 days covering him.

Turning to his first 100 days in office, Trump reeled off a list of accomplishments, saying his time in office has been “very exciting and productive,” putting coal miners back to work, protecting steel and aluminum workers, and “eliminating job-killing regulations.” “We are keeping one promise after another and frankly the people are really happy about it, they see what’s happening,” he said.

“To understand the historic progress we’ve made, we must speak honestly about the situation that we, and I, inherited,” he continued. “The previous administration gave us a mess.”

Trump said the U.S. is part of “a broken system of global plunder at American expense,” and promised that he would make a “big decision” on the Paris Climate Agreement in the next two weeks. During his campaign, he threatened repeatedly to withdraw from the Paris Agreement or to “renegotiate” the United States’ participation in the global emissions-reduction pact.

Trump also emphasized his commitment to building the border wall he has promised between the United States and Mexico. He said his administration has already imposed “immigration control like you’ve never seen before.”

“People seeking admission into our country — they are going to be admitted because they love our country. They will not be admitted otherwise,” he said. 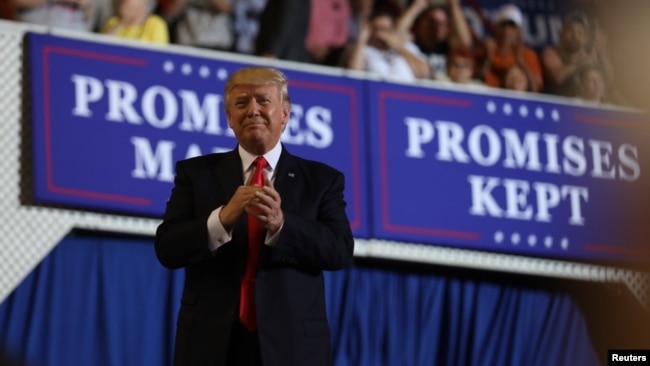 Earlier in the day, Trump signed an executive order at a shovel factory in central Pennsylvania, directing his administration to review the nation’s trade agreements. The order aims to determine whether the U.S. is being treated equitably by its trading partners in the 164-nation World Trade Organization.

Also Saturday, the White House Correspondents’ Association in Washington held its annual black-tie dinner, an occasion that has earned the nickname “Nerd Prom.” The nickname plays off Washington’s reputation for politics and policy more than for glitz and glamour.

For the first time since Ronald Reagan skipped the dinner in 1981, the U.S. president is not attending the dinner, an affair that usually features jokes at the president’s expense. Trump boycotted this year’s dinner, citing his contempt for the media.

“I hope they have a good dinner,” he tweeted. “Ours is going to be much more exciting.”

Trump has called the media “fake” and “the enemy of the people.”

Jeff Mason, president of the White House Correspondents’ Association, said at the dinner, “Freedom of the press is a building block of our democracy, undermining that by seeking to delegitimize journalists is dangerous to a healthy republic.”

A Chinese coast guard vessel has imposed itself in Indonesian waters – some 1500km from mainland China – insisting...