The Suharto political dynasty is being revived in Indonesia. Twenty years after the fall of the country’s notorious former President Mohamed Suharto, his youngest son is leading a new political party into next year’s elections. Hutomo Mandala Putra, or “Tommy Suharto”, as he is commonly known, has been touring several Indonesian regions, even travelling to Solo to receive a royal title in an attempt to gain the support of would-be voters.

Suharto and his newly-formed Party Berkarya (Work Party) are focusing on the widening gap between rich and poor in Indonesia.  “We have gone through 20 years of reforms, but the situation has not improved,” he says. “Our national debt has increased, and the living conditions of our people have not improved significant[ly].” Party Berkarya’s aim, according to Suharto, will be to “develop a people’s economy that will be controlled by the people and benefit the people to improve people’s welfare”. Suharto is not worried that his father’s legacy of corruption and brutality will taint his campaign; he says that Indonesians are “longing” for the return. 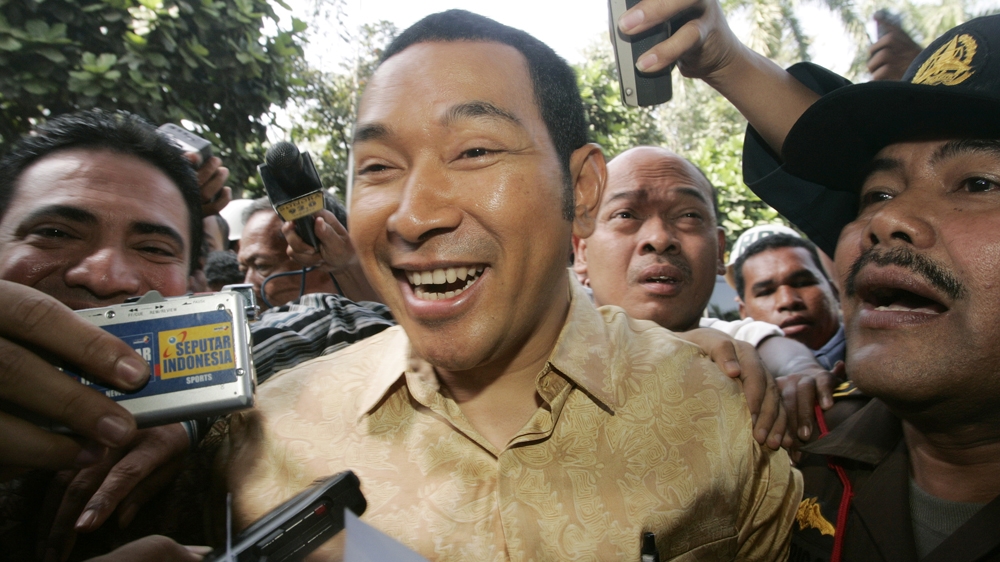 The name ‘Suharto’ is synonymous with corruption in Indonesia, but Tommy is the only member of the family to have been convicted of corruption [Dadang Tri]

The United Nations and Transparency International have alleged that Mohamed Suharto stole more state assets than any other world leader, amounting to billions of dollars, a claim his son denies. “These figures are not true,” he says. “They have said that my father owns billions of dollars in Europe in a Swiss bank … nobody has provided any evidence. It was never proven.”

In 2015, Indonesia’s Supreme Court ordered the Suharto family to repay more than $400m embezzled from a scholarship foundation, but the money is yet to be returned. According to Suharto, the court’s ruling is impractical and does not take into account the government closure of a bank where much of the money was invested. “How can foundations give money back to the government if these foundations are using donors’ money, not only [money] from the government, and this money has already been given to those receiving scholarships?” he says.

“The money that they are looking for is the money which was invested in Bank Duta. The bank has been closed by the government … [and] has bigger obligations towards its customers, of course, the customers are being prioritised.”

Tommy Suharto himself has been convicted of corruption but went into hiding to avoid jail. In 2002, he was again sentenced for ordering the murder of the Supreme Court judge who handed down his previous sentence. He was released after serving four years of his 15-year sentence. “I have done my term and, according to the laws, I now have the same rights as anyone else. I have the right to vote and the right to be elected,” he says.

More than one million Indonesians died during Mohamed Suharto’s rule, while thousands of others were jailed without legal process. He stepped down in 1998, after 32 years in power, following a series of riots.  One thousand Indonesians are estimated to have died during the riots, which destroyed shopping malls and homes in the capital, Jakarta.

At least 150 ethnic Chinese women were raped in the violence, which began after the Asian financial crisis caused the stock market to crash, and escalated when soldiers shot four students at a university. Military and political leaders said Mohamed Suharto had lost his grip and abandoned him, forcing him to step down.  Tommy Suharto suggests that the riots might have been orchestrated to remove his father from power.

“It’s like a movie in which the director has ordered everything, but those in the field are just the actors. So we can’t see who is behind it,” he says. “My father could have stayed in power; there were still military troops who were ready to defend him and to safeguard the situation”.