‘There Was a Trail of Blood:’ Senator Recalls Chaos of Shooting, Aftermath

‘There Was a Trail of Blood:’ Senator Recalls Chaos of Shooting, Aftermath

When the gunfire popped in the northern Virginia baseball diamond Wednesday morning, Senator Jeff Flake took cover in the first base dugout as he watched a congressional colleague bleeding in the field.

“I wanted to get to him, but as long as there was gunfire overhead, I couldn’t,” Flake recalled, still wearing a red jersey and cleats as he walked away from the scene hours later.

“I don’t know if anybody was targeted. I just remember seeing gravel bounce up as gunfire hit,” he told a small group of reporters.

With about 10 others in the dugout, including the young son of Congressman Joe Barton of Texas, Flake could see the gunman in the field. 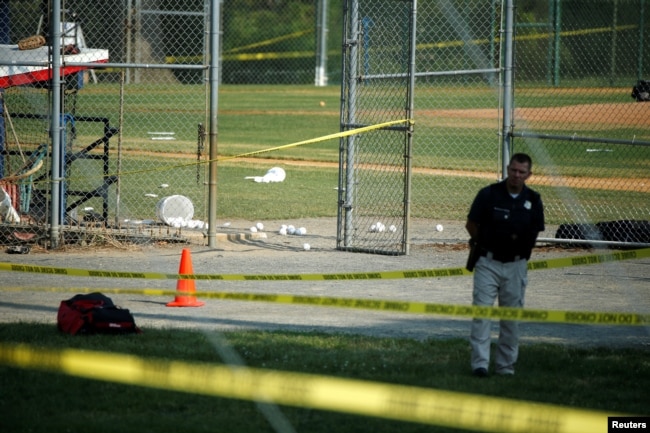 A police officer mans a shooting scene after a gunman opened fire on Republican members of Congress during a baseball practice near Washington in Alexandria, Virginia, June 14, 2017.

“He’d come around back near home plate and had a clear line of sight into the dugout. And so, we had to get down again,” Flake said.

The gunman, later identified as James Hodgkinson of Belleville, Illinois, opened fire on the group of Republican lawmakers as they practiced for an annual baseball game against Democratic members of Congress.

Flake, a Republican from Arizona, didn’t remember whether the gunman was saying anything and in the exchange of bullets between police and Hodgkinson, there were moments when the senator didn’t know which gunfire was coming from which side.

“There was a lot of yelling around. I couldn’t tell what was what. For a while there, in the dugout, when the security detail opened fire, I didn’t know if that was friendly fire or not,” Flake told reporters. A Capitol Police officer “was using our dugout as kind of a shelter to fire on the gunman, and I kept yelling ‘Are you friendly? Are you friendly?’ and he yelled back ‘Yes.’ ”

Among those hiding alongside Flake was Congressman Roger Williams of Texas.

Williams says Flake first used his belt in the dugout to stop the bleeding of a leg wound sustained by his staff member, Zachary Barth, who Flake said “ran on a bad leg all the way across the field into the dugout.”

“We had to apply pressure to that wound to keep the bleeding down,” he added.

Flake is credited with tending to at least two wounded teammates before medics arrived at the scene.

When the gunfire stopped, he hurried onto the field and used his hands to cover a bullet wound to the left hip of House Majority Whip Steve Scalise, a Republican from Louisiana. 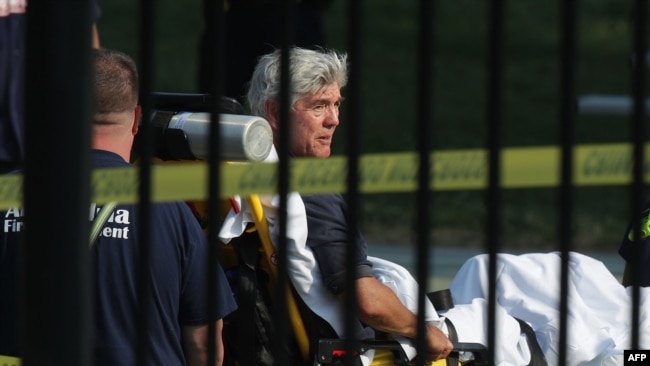 “Scalise was lying motionless on the field – he’d dragged himself off the infield into the outfield. There was a trail of blood where he went,” Flake said. “It was, you know, a tough thing being in the dugout, seeing him out there and not being able to get him.

‘I ran out to Steve’

“When I heard somebody said the shooter [was] down, I ran out to Steve. … And then [Congressman] Brad [Wenstrup] from Ohio, who’s a doctor, ran out there and we cut away the uniform and got some gauze,” Flake said.

Scalise was hit while he stood at second base. He was taken to a Washington hospital and is listed in critical condition after surgery Wednesday afternoon.

“As soon as we got him into the ambulance, I got his phone and called his wife just to make sure she didn’t hear the news before. Fortunately she hadn’t, and I was able to tell her that he looked to be stable and we were with him,” Flake said.

Two Capitol Police officers, Special Agent Crystal Griner and Special Agent David Bailey, who were there as part of the security detail for Scalise – the No. 3 person in the House Republican Party – also were wounded during the shooting, but are in good condition and expected to recover quickly, Capitol Police Chief Matthew Verderosa said later Wednesday. 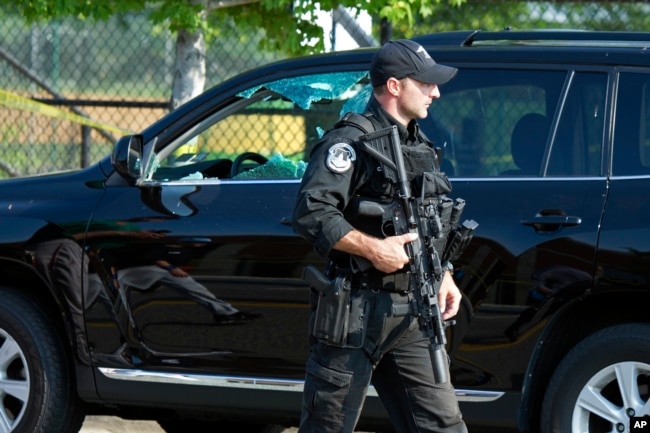 A Capitol Hill Police officer walks past an automobile with the driver’s window damaged at the scene of a shooting in Alexandria, Virginia, June 14, 2017.

The officers, along with Alexandria Police, are credited with saving lives on the field.

“Gratefully, they were there,” Flake said of the officers. “Had they not been, who knows what would have happened.”

The Congressional Baseball Game is scheduled for Thursday evening in Nationals Park.