In what was the biggest demonstration since the pandemic began, about 3,000 people gathered at Bangkok’s Democracy Monument on Saturday, according to organizers. They called for the dissolution of parliament, for the constitution to be rewritten, and for authorities to stop intimidating activists.

Similar demands were made at smaller protests that sprang up in towns and cities across the country every day this week, with more planned for the coming days. The surge in protests comes at a difficult time for the country, which remains under a state of emergency to contain the coronavirus pandemic.

The protests also come after years of political upheaval marked by a military coup in 2014, followed by failed promises to restore democracy, and what activists say is a repression of civil rights and freedoms. While the military-backed ruling coalition promised to restore stability to a nation rocked by decades of coups and political crises, many of the country’s young people feel Prayut’s government has done little to improve their economic prospects, restore democracy, or build confidence in the people.

Many of those on the streets say they are tired of the same old faces that have dominated Thai politics for years, and have grown frustrated that attempts to reform existing power structures have ultimately failed.

“The privilege and superiority should not be inherited by blood, this system has dragged Thailand,” said Parit Chiwarak, a core leader of the Student Union of Thailand (SUT), which helped organize Saturday’s protest. 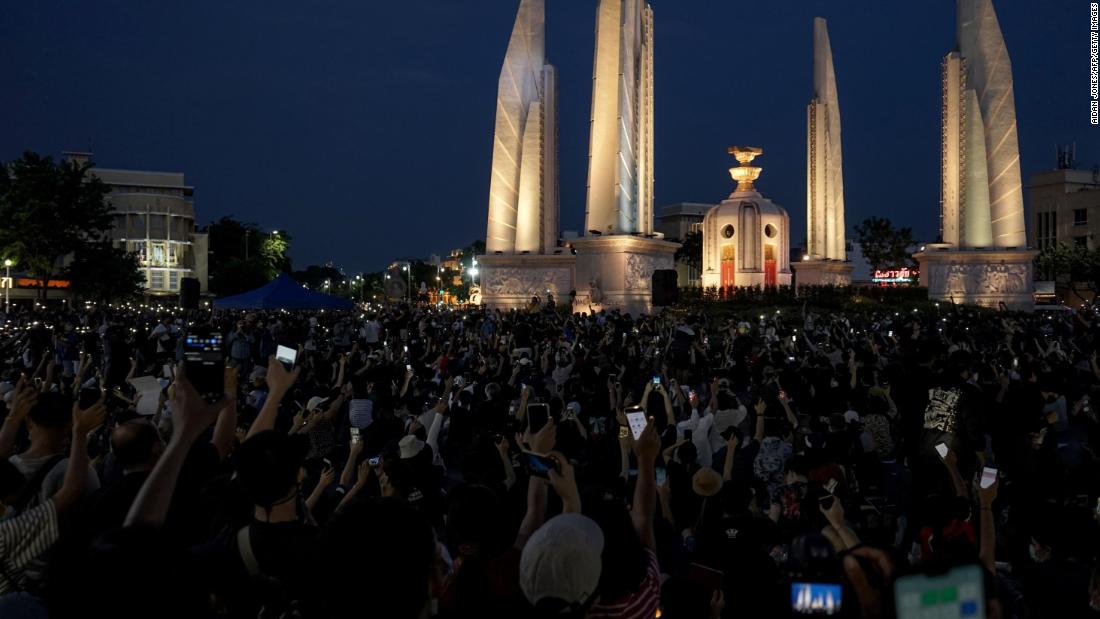 ‘They don’t have a future’

When the popular pro-democracy Future Forward Party — which won the third highest number of votes in the election — was ordered to disband in February, angry young protesters stormed the streets in flash-mob-style protests, calling the move undemocratic.

Thitinan Pongsudhirak, political scientist and director of the Institute of Security and International Studies at Chulalongkorn University, said the student movement is “motivated by a lack of a future.”

“If you listen to them, one word that is always is included is ‘future.’ They don’t have a future. These young people for the last 20 years living through Thai politics and putting up with two military coups, and at the same time Thailand has gone nowhere,” he said.

At protests this week, demonstrators flashed the three-fingered salute from the “Hunger Games” movie franchise, which has become a symbol of Thailand’s pro-democracy movement since the 2014 military coup. Others on Saturday were even seen tip-toeing a dangerous line in expressing their anger by making veiled statements aimed at the monarchy.

In Thailand, those who criticize the powerful royal family face lengthy jail sentences for breaking strict royal defamation laws, known as lèse majesté. Such grievances are only whispered about in private. That some protesters felt emboldened to hint at their dissatisfaction publicly shows the extent of their disillusionment with how Thailand is being run.

“It’s really significant,” said Punchada Sirivunnabood, associate professor of politics at Mahidol University’s Faculty of Social Sciences and Humanities. “It’s a signal to the government that this time the students, especially the young generation, they feel it’s not OK for the government to violate their rights or try to control the power.”

SUT’s Parit said he saw “more fire in their eyes” of those who attended. “(This) is the uprising of the people who have been oppressed for a very long time,” he said. They are ready to fight.” Prime Minister Prayut on Tuesday said he was “worried and concerned about this movement” and warned protesters against violating the monarchy.

“I feel for our children, youths and university students and I also share their parents’ worries too. But there must be a vigilance about violations, I think people won’t tolerate it and allow incident like this to happen again.”

He said that the protesters should submit their demands to parliament so a committee can review them.

Why the protesters are back out on the streets

Thailand has had success in containing the coronavirus pandemic, going 60 days with no local transmission. Despite being the first country outside mainland China to confirm a case of the virus, Thailand has one of the lowest caseloads in the world with 3,269 reported infections and 58 deaths as of Friday, according to John Hopkins University.

But the economic impact from prolonged lockdowns and a complete drop in international tourists has been severe. Thailand’s economy is expected to contract by at least 8% in 2020, according to the Bank of Thailand, one of the sharpest projected declines in the Asia-Pacific region.

“Covid-19 has brought even greater hardship,” said Parit, the SUT leader. “Among us students who are about to graduate, we are expecting to have no jobs and millions of people have lost their jobs.”

Compounding their worries is a Covid-19 state of emergency that has been in place since March 24. Another month-long extension is planned but critics say it is being used to stifle political opposition and free speech.

The emergency decree gives the Prime Minister power to ban public assemblies, stop people from leaving their homes and prevent any attempt to report or distort information that may cause public fear. Punchada said many see it as a means for the government to not only “control the Covid-19 but to control the people who have political ideas different from the government.”

On Tuesday, Gen. Natthaphol Nakpanich, deputy army chief and deputy chairman of the lockdown-easing committee, denied claims the emergency law was political, according to local media. He reportedly said the decree would not be used to control political gatherings.

Missing activists and harassment of critics

Another major catalyst driving the movement is the recent disappearance of a young pro-democracy activist who was living in Cambodia after fleeing the 2014 coup. Thai national, Wanchalearm Satsaksit, 37, was affiliated with the United Front for Democracy Against Dictatorship, known as the “Red Shirts.” The group were supporters of Thaksin Shinawatra, the former Prime Minister who was ousted in a 2006 coup.

His sister, Yingluck Shinawatra was removed from power shortly before the 2014 coup. When the military took over, many Red Shirt activists and anti-royalists fled the country to Cambodia. Wanchalearm was an outspoken critic of the government from his self-imposed exile in the Cambodian capital and the day before his abduction had reportedly posted an anti-government video on Facebook.

According to Human Rights Watch, Wanchalearm was abducted by unidentified armed men in front of his Phnom Penh apartment and forced into a car on June 4. The United Nations Committee on Enforced Disappearances and the European Parliament have called on the Cambodian and Thai authorities to conduct inquiries. Wanchalearm’s disappearance was raised by the opposition in parliament and the Thai foreign ministry said it has asked Phnom Penh to investigate.

Since the coup, a string of activists and critics of the monarchy in exile have reportedly gone missing or been abducted off the streets. In December 2018, the bodies of two missing Thai activists were found floating in the Mekong River in Thailand. Human Rights Watch said none of the cases have been resolved, and no one has been prosecuted. On Saturday, a group of protesters could be seen holding posters with the photos of missing activists.

Since Prayut took power in 2014, hundreds of activists have been charged under sweeping laws such as sedition or lese majeste, and the introduction of a Computer Crimes Act restricts online expression and increases surveillance and censorship.

“The students are sick and tired of all the systemic intimidation, abuse of power,” Thitinan said. “It’s kind of a dark era that Thailand is descending into.”

Whether the protests have enough ammunition to effect change, or morph into a sustained movement, is something that experts are cautious about.

“They have to have more numbers to have a critical mass in order to make an impact,” said Thitinan. But even with the few hundred or thousand seen this week could be enough to “provoke a government response.”

“There’s a possibility that they can get out of hand, meaning there could be an outright suppression if they become too provocative,” he said.

Morning Ritual for Your Skincare Routine

Morning Ritual for Your Skincare Routine