Syrian rebel negotiators announced Saturday their support of Russia-Turkey brokered talks aimed at finding a political solution to the nearly six-year-long conflict in Syria, but they say a planned meeting this month in Kazakhstan should be seen only as a first step toward the resumption of the long-stalled U.N.-backed Geneva peace process.

The Syrian opposition’s High Negotiations Committee, which has been shut out of the Russian-Turkish talks process, said in a statement that it backed a military delegation, which will attend the meeting in the Kazakh capital of Astana.

“The committee stresses its readiness to support the military delegation to be formed by the opposition to attend the talks,” the HNC said. It added that the Kazakh talks must shore up a cease-fire in Syria, also brokered by Moscow and Ankara.

But the HNC emphasized the Kazakh meeting was a “preliminary step for the next round of political negotiations” in Geneva. The statement was issued after a two-day meeting by the HNC in the Saudi capital of Riyadh.

Talks aimed at finding a political solution to the Syrian civil war are set to be held this month in Astana, capital of Kazakhstan.

Hours before the HNC’s announcement, Turkey’s foreign minister, Mevlut Cavusoglu, told reporters in Ankara that Turkey and Russia would invite U.S. officials to attend the talks in Kazakhstan.

Cavusoglu had previously expressed support for U.S. participation in the talks, though Russia has yet to acknowledge publicly its backing for the invitation to U.S. officials.

U.N. Syria mediator Staffan de Mistura is aiming to convene separate peace talks in Geneva on February 8. Russian officials say the Kazakh talks are meant to complement the intermittent Geneva process and not to compete with it. But fears about of Russia’s intentions have mounted among rebels.

European diplomats say Russian officials have introduced the idea of securing some preliminary agreement at the Kazakh conference about the formation of a transitional cabinet that would include ministers from the regime of President Bashar al-Assad, the rebels and government-favored opposition groups that have remained in the Syrian capital of Damascus.

Western diplomats say such a move would be premature, fearing it would be used to deflect Geneva-based debate about the fate of Assad himself. 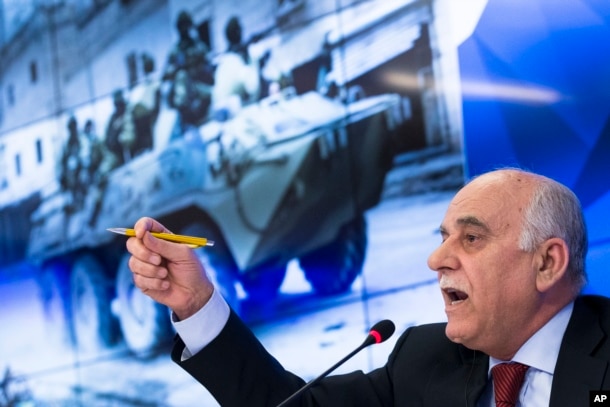 General Mustafa Al-Sheikh, former head of the Free Syrian Army and the head of a Syrian opposition delegation visiting Moscow, gestures while speaking to reporters in Moscow, Jan. 13, 2017. Al-Sheikh commented on the planned Syria peace conference in Astana, saying its main goal is to secure a lasting cease-fire in Syria and prepare talks in Geneva on Syria political settlement.

The HNC announcement came after meetings in Turkey by opposition groups earlier in the week.

Some Syrian rebels expressed anger in the meetings about the exclusion of the HNC from the Kazakh peace conference and at the Russian insistence on a military delegation only being present to represent opposition factions.

Zakaria Malahafiji, a political officer with a rebel militia aligned with the Western-backed Free Syrian Army, said last week: “About 100 leaders from several Syrian political and military groups agreed on the necessity to send a delegation to Astana that included members of the High Negotiations Committee.”

The HNC’s announcement Saturday would appear to indicate some members of the committee will be included in the military delegation to be sent to the Kazakh talks and that the Russians have so far not raised objections.

The nationwide cease-fire in Syria, which began two weeks ago, has largely held up, unlike two others agreed upon in the past 12 months. But the warring sides have accused each other of violations, and on Saturday there were reports of clashes between Islamist rebel factions and Syrian Shi’ites in the towns of Kafriya and Al-Fu’ah in the northeastern countryside of Idlib, the province to the west of Aleppo.

The leaflets included photographs of dead bodies and a written warning: “Reconsider your thoughts and think about the consequences — this is the inevitable fate for every terrorist who points weapon in the face of the army and people.” 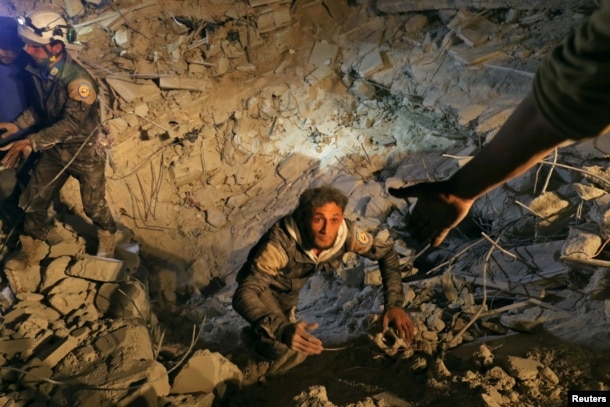 A civil defense member attempts to get out of a site hit at night by an airstrike in Saraqeb, in rebel-held Idlib province, Syria, Dec. 11, 2016.

Regime warplanes carried out airstrikes on the town of Saraqeb and villages in the eastern countryside of Idlib, according to the Syrian Observatory for Human Rights, a Britain-based monitoring group that gathers information from a network of activists inside Syria.

And regime warplanes carried out more airstrikes in eastern countryside of Hama province, too, on Saturday.

Syrian government officials insist the airstrikes targeted militants from the Islamic State terror group, which along with the al-Qaida-linked Jabhat Fateh al-Sham, formerly known as the al-Nusra Front, is excluded from the Russian-Turkish brokered cease-fire.