Air strikes on the Syrian city of Aleppo have killed at least 28 people, including children, according to the Syrian Observatory for Human Rights.

The attacks, reportedly by Syrian or Russian warplanes, were on rebel-held areas in the east of the city.

A correspondent for the French news agency AFP who is in Aleppo says barrel bombs were dropped on several areas.

In one neighbourhood, a hospital was hit in the bombing, wounding some staff and patients.

“All kinds of weapons were used to bomb the hospital, from midnight until about 11:00. Now it’s unusable,” Mohammad Kheir, one of its doctors, told AFP. 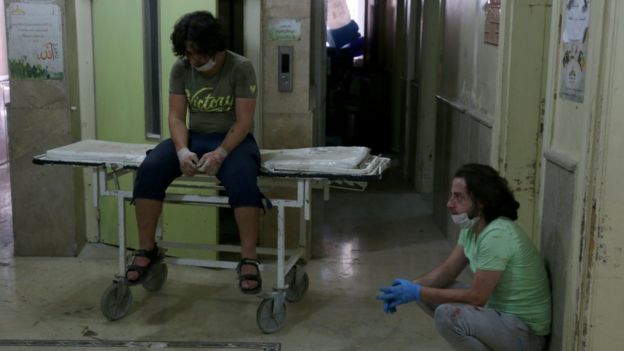 Despairing medical workers, after their hospital was destroyed by barrel bombs

People of another neighbourhood reported the use of the crude unguided explosive devices too. “All of a sudden there was a barrel bomb on top of us. We came outside and a second one, then a third one hit us,” said Ahmad Erfan, a teenager living in the Salhin neighbourhood.

The Syrian government says western areas of Aleppo, which it controls, have been hit by rebel shelling, killing at least one person. 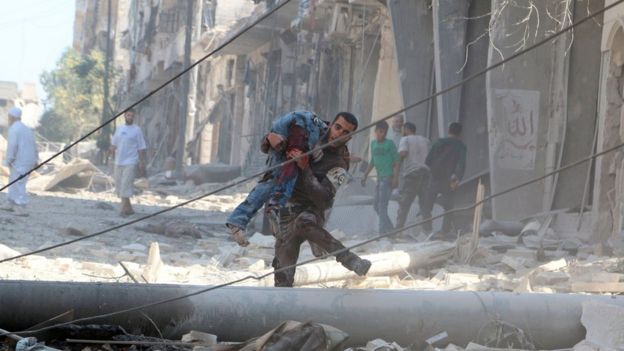 Many people were rescued from collapsed buildings, but at least 20 people are still believed to be buried under the rubble

Aleppo, once Syria’s commercial and industrial hub, has been divided since 2012, with the government controlling the western half and rebel factions holding the east.

But in recent months, government forces backed by Russian air strikes have almost encircled the rebel-held areas and cut off one of the rebels’ two routes to Turkey.

Since the, the government has advanced further on the one remaining supply line.

The battle for the city led to the collapse of a cessation of hostilities negotiated by Russia and the US at the end of February.

On Friday, US Secretary of State John Kerry and his Russian counterpart Sergei Lavrov said they had agreed on “concrete steps” to salvage the failing ceasefire.

Nice attack: What we know about the Bastille Day killings

JAKARTA  –   To inform the right information about palm oil development in Indonesia, the Ambassador of Indonesia in...