For Southeast Asia’s biggest economies, 2018 wasn’t supposed to be like this. If a widening trade war wasn’t enough to contend with, a global wave of policy tightening, strong oil prices and domestic politics are also weighing on growth prospects for the region. Policy makers are rewriting economic strategies as volatility surges, in some cases putting greater emphasis on currency stability or even structural changes. 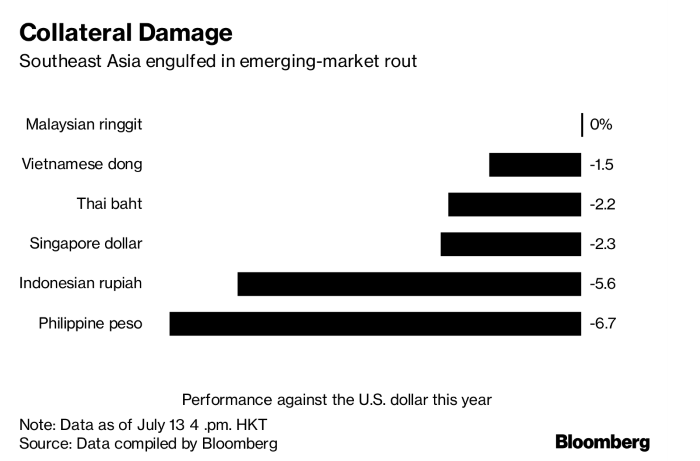 “With trade war risks now materializing, this suggests stronger headwinds for exports,” said Tamara Henderson, an economist at Bloomberg Economics in Singapore. “Investment, already buffeted by tighter monetary policy, is also likely to be a casualty.”

Election uncertainty in Indonesia and Thailand, as well as questions around the new Malaysian government’s commitment to fiscal consolidation, could add to investor angst in the region for the rest of 2018, said Henderson.

Here’s how the growth outlooks for Southeast Asia’s six biggest economies are being tested:

Policy makers in Indonesia have been working to temper expectations around growth as they’ve turned their focus to promoting financial stability amid a slumping rupiah. A widening current-account deficit and investment outflows are keeping more rate hikes on the cards for 2018, and the government’s pledges for lower spending and import curbs will probably damp growth further. Bank Indonesia’s next decision is on Thursday.

Uncertainty abounds in Malaysia, where a two-month-old government is only starting to give a clearer picture of economic policy. A new sales tax planned for later this year could slow consumer spending, and with more infrastructure projects on ice, investment and government spending outlooks are also clouded.

While Bank Negara Malaysia left its benchmark interest rate on hold last week, analysts have been trimming predictions for an increase amid the limp growth outlook and weak inflation. A more dovish stance from the central bank would buck regional and global trends.

Inflation shooting far beyond the ceiling of its target range is giving the Philippines central bank some nerves that overheating might already have set in. The rapid price gains also could take some shine off the otherwise solid economic growth, particularly if the central bank is forced to move faster on raising interest rates.

A third hike for this year now looks more likely for the Aug. 9 decision.

While economists see steady growth for Singapore in 2018, the second half may stumble. The city-state’s recent property-market curbs could damp sentiment and translate to crimped consumer spending. Singapore may also struggle to buoy the confidence of manufacturers, whose expectations were already lowered after a stronger-than-expected 2017 for global trade.

“We had projected slower growth in the second half, but the negative trade developments are increasing the downside risks,” economists at Standard Chartered Plc in Singapore said in a research note last week. “New export orders within the PMI readings have also decelerated.”

The Thai economy is something of a regional outlier, with the first quarter’s 4.8 percent annual growth the fastest in five years. Inflation has only recently broken into the lower end of the central bank’s 1-4 percent target band, allowing policy makers some room to hold interest rates near the record low they’ve remained at since 2015.

“Economic growth in Thailand should remain reasonably strong in the near term, but a slowdown in global growth and rising political uncertainty suggest the recent upturn will run out of steam by next year,” economists at Capital Economics Ltd. said in a research note last week.

Thailand, run by a military government since a coup in May 2014, is expected to have an election early next year.

Given that Vietnam’s trade as a share of gross domestic product is about 200 percent, its economy is particularly sensitive to any worsening tensions that threaten global supply chains. The economy will be especially attuned to China’s growth slowdown for knock-on effects in regional trade, and has also felt the weight of rising U.S. interest rates.

Growth eased in the second quarter from the previous three months on reduced mining output and state investment. The government expects a further slowing in the second half and is adding measures to boost business, the General Statistics Office said last month.