China has firmly rejected an international tribunal ruling that its claims to rights in the South China Sea have no legal basis.

President Xi Jinping said China’s “territorial sovereignty and marine rights” in the seas would not be affected by the ruling “in any way”.

But he insisted China was still “committed to resolving disputes” with its neighbours.

The Philippines brought the case to the Permanent Court of Arbitration.

The tribunal, based in the Hague, ruled that there was no evidence that China had historic rights to the waters or resources that fell within its “nine-dash line”, and was violating the Philippine’s sovereign rights with its operations there.

The ruling was made by an arbitration tribunal under the United Nations Convention on the Law of the Sea (UNCLOS), which both countries have signed.

It is binding but the Permanent Court of Arbitration has no powers of enforcement. 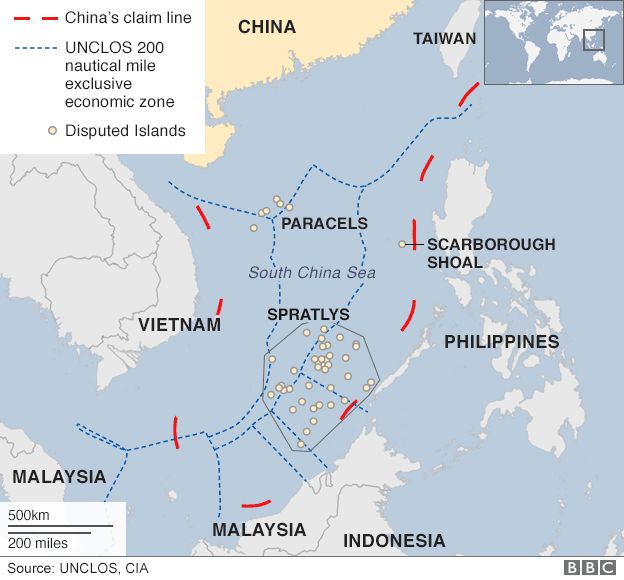 The Philippines has had diplomatic spats with China over the Scarborough Shoal and Spratlys in particular.

It says China’s “nine-dash line”, which China uses to demarcate its territorial claims, is unlawful under the UNCLOS convention.

Vietnam, Taiwan, Malaysia and Brunei also have competing claims in the region.

Although these islands are largely uninhabited, they may have reserves of natural resources around them. There has been little detailed exploration of the area, so estimates are largely extrapolated from the mineral wealth of neighbouring areas.

The sea is also a major shipping route and home to fishing grounds that supply the livelihoods of people across the region.

Chinese media were quick to take the official line that Beijing would not recognise the ruling.

China’s state news agency Xinhua said that “as the panel has no jurisdiction, its decision is naturally null and void”.

The Philippine government welcomed the ruling as a “milestone decision”, but there was little outright celebration.

The BBC’s Jonah Fisher in Manila says this may be due to a recent change of government – many Filipinos believe newly-elected President Rodrigo Duterte may have sought promises of Chinese investment, in return for a quiet, dignified response.

There was more delight among Philippine social media users, who dubbed the ruling #CHexit.

Both the US and Japan urged both sides to abide by the ruling. The US called it an “important contribution to the shared goal of a peaceful resolution to disputes in the South China Sea”.

But Taiwan rejected the tribunal’s findings on an area it administers, saying the ruling had “seriously damaged” its rights and would “definitely not accept this ruling”.

The US sent an aircraft carrier and fighter jets to the region ahead of the decision, while the Chinese navy has been carrying out exercises near the disputed Paracel islands.

This result represents a major loss of face for China, and yet the first response from Beijing to the UN tribunal’s demolition of its claims seems be rather conciliatory.

On the one hand, the Chinese government has re-stated that it has territorial sovereignty and maritime rights in the area and that the activities of its people there date back to over 2,000 years ago.

However, it then goes on to talk about “consultation with the states directly concerned” and proposes “joint development in relevant maritime areas”.

Airlines and shipping companies will be pleased to hear that China has also restated that it respects “freedom of navigation and over flight enjoyed by all states under international law in the South China Sea” and that it stands ready to ensure “unimpeded access to international shipping lanes”.

All this seems to point towards Beijing possibly seeking some sort of negotiated settlement rather than ramping up the pressure on the Philippines following Manila’s comprehensive victory in The Hague.