The U.S. Justice Department has opened a civil rights investigation into the deadly car ramming Saturday during a protest against a white nationalist demonstration in Charlottesville, Virginia.

Attorney General Jeff Sessions, the country’s top law enforcement official, said: “The violence and deaths in Charlottesville strike at the heart of American law and justice.” He added, “When such actions arise from racial bigotry and hatred, they betray our core values and cannot be tolerated.”

Virginia’s governor told white supremacists, who had gathered Saturday in Charlottesville to protest the removal of a Confederate statue, to “go home” after three people were killed in the violence at a rally and in a helicopter crash that police linked to the protest.

“I have a message to all the white supremacists and the Nazis who came into Charlottesville today. Our message is plain and simple: Go home,” McAuliffe said at a news conference. “You are not wanted in this great commonwealth. Shame on you.”

McAuliffe said on Twitter that he declared the state of emergency “to aid state response to violence at alt-right rally in Charlottesville.” “The acts and rhetoric in Charlottesville over the past 24 hours are unacceptable and must stop. A right to speech is not a right to violence,” he tweeted.

President Donald Trump, speaking midafternoon from New Jersey, condemned “the egregious display of hatred, bigotry and violence on many sides” in Charlottesville. 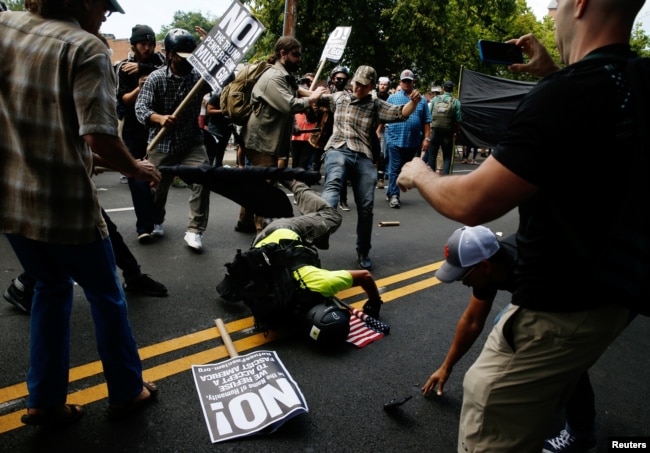 A man hits the pavement during a clash between members of white nationalist protesters against a group of counterprotesters in Charlottesville, Aug. 12, 2017.

Trump, who was preparing to sign a bill to extend a veterans health care program, called for a “swift restoration of law and order” in the city, and added “no citizen should ever fear for their safety and security.”

He did not answer questions from reporters after signing the bill, including a reporter’s request for an explanation of what Trump meant by “many sides.”

Shortly after the rally has canceled in Charlottesville, a car rammed into people in a street as they were leaving a counterprotest. Video showed some bodies flying in the air.

A 32-year-old woman was killed and about two dozen others were injured. 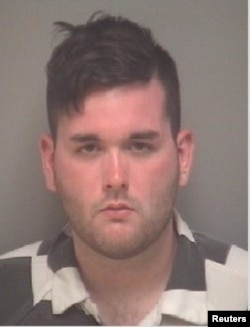 James Alex Fields Jr., 20, is seen in a mugshot released by Charlottesville, Virginia, police department after being charged with one count of second degree murder, three counts of malicious wounding and one count of failing to stop at an accident that resulted in a death.

Police said they had the driver of the car in custody, identifying him later Saturday night as James Alex Fields Jr., 20, of Ohio. Fields was being held on suspicion of second-degree murder.

The Toledo Blade newspaper in Ohio broke the news to Fields’ mother, Samantha Bloom, who said she had not been contacted by authorities. She said her son told her he was going to an “alt-right” rally in Virginia, without offering any details about the extremist nature of the gathering.

“I thought it had something to do with Trump,” Bloom told the newspaper. She said she and her son had moved to Ohio about a year ago from Florence, Kentucky.

Charlottesville Mayor Michael Signer said on Twitter he was “heartbroken” about the death and urged all those still at the protest site to go home.

Hours later, Virginia state police said one of their helicopters had crashed in a wooded area outside the city. The helicopter was being used to help law enforcement monitor the rally.

Police said Lt. H. Jay Cullen of Midlothian and Trooper-pilot Berke M.M. Bates of Quinton were killed in the crash.

The incident involving the car occurred as people were leaving the area after police deemed the demonstration unlawful; multiple acts of violence had broken out between the white supremacist demonstrators and counterprotesters.

Hundreds from both sides were involved in Saturday’s melee, throwing punches as well as water bottles and other items. Police used tear gas to separate participants.

The gathering at the University in Virginia, dubbed the “Unite the Right” rally, had previously prompted McAuliffe to warn people to stay away from the campus. White nationalists carry torches on the grounds of the University of Virginia, on the eve of a planned “Unite the Right” rally in Charlottesville, Va., Aug. 11, 2017.

In what they called a pro-white demonstration, torch-bearing white nationalists marched Friday night through the university campus and gathered around the statue of General Robert E. Lee, a Confederate Civil War hero. They shouted epithets and slogans such as “white lives matter,” a take on the grass-roots organization Black Lives Matter, which was created after several killings of black Americans by police officers.

The city voted in April to remove the statue, a move being taken by many U.S. cities against such Confederate memorials. Since then, the city has been a focus of white nationalists.

One demonstrator at Saturday’s protest, who did not give his name, told VOA, “We want to keep the statue because we think that it is an important symbol of our heritage and our people. It is meaningful. Its meaning is implicitly connected to white people … in preserving our heritage and preserving the white race, our white heroes. Robert E. Lee in one of those heroes.”

Kasey Landrum, however, from the counterprotest group, told VOA, “I am here because white nationalists, white supremacists, Nazis, whatever you call them, they are the same thing. They represent the structures of evil, which in this case is white supremacy, and that is an assault on all of us. … Unless we stand up against that … they are going to continue to harm us all.” 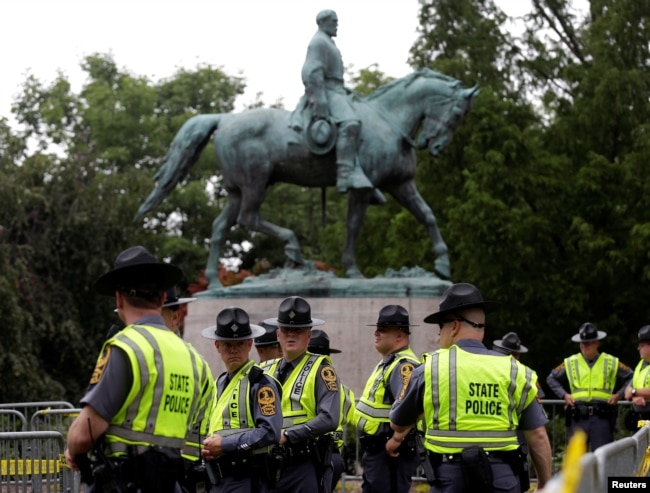 Virginia state troopers stand under a statue of Robert E. Lee before a white supremacists rally in Charlottesville, Va., Aug. 12, 2017.

Trump was criticized by members of both political parties for not specifying white nationalists in his comments about the violence in Charlottesville.

“We should call evil by its name. My brother didn’t give his life fighting Hitler for Nazi ideas to go unchallenged here at home. – OGH’’ Senator Orrin Hatch, a Republican from Utah, said on Twitter.

“@POTUS needs to speak out against the poisonous resurgence of white supremacy. There are not ‘many sides’ here, just right and wrong,’’ Representative Adam Schiff, a Democrat from California, said on Twitter.

Duke said the rally “represents a turning point for the people of this country.”

“We are determined to take our country back. We are going to fulfill the promises of Donald Trump,” he added.

Signer, the Charlottesville mayor, said he blamed Trump for inflaming racial prejudices during the 2016 presidential campaign.

“I’m not going to make any bones about it. I place the blame for a lot of what you’re seeing in America today right at the doorstep of the White House and the people around the president,’’ he told The Associated Press.

Trump to Call for China IT Trade Probe on Monday: Politico