The cast of “Stranger Things,” Emma Stone and Julia Louis-Dreyfus won at a Screen Actors Guild Awards that has been, in part, a very well-dressed protest against President Donald Trump’s sweeping immigration order.

While protests continued at airports nationwide over Trump’s temporary ban of citizens from seven predominantly Muslim nations, many at the SAG Awards struck a defiant tone. Ashton Kutcher, the first presenter at the Shrine Auditorium in Los Angeles, welcomed not just the viewing audience but “anyone in airports that belong in my America.”

Louis-Dreyfus added another honor for her performance on the political satire “Veep.” She called herself the daughter of an immigrant who fled religious persecution in Nazi-occupied France.

“Because I love this country, I am horrified by its blemishes,” said Louis-Dreyfus. “And this immigrant ban is a blemish and it is un-American.”

Perhaps the most moving speech came from Mahershala Ali, who won best supporting actor for his acclaimed performance in Barry Jenkins’ coming-of-age portrait, “Moonlight.” Ali said he saw lessons for today in “Moonlight,” in which he plays a character who makes a difference in a shy, gay Miami boy’s hard life. “We see what happens when you persecute people,” Ali said. “The fold into themselves.”

Ali said his relationship with his mother exemplified tolerance. The son of an ordained minister, Ali converted to Islam 17 years ago.

“We put things to the side,” Ali said of their differences. “I’m able to see her. She’s able to see me. We love each other. The love has grown. That stuff is minutia. It’s not that important.”

But the fieriest speech was by David Harbour, who led the cast of Netflix’s “Stranger Things” — maybe the night’s biggest surprise winner — on stage. “We will hunt monsters,” he vowed in lengthy remarks that drew a standing ovation.

Like Ali, other Oscar favorites cemented their front-runner status, including Emma Stone for “La La Land” and Viola Davis for Denzel Washington’s August Wilson adaptation “Fences.” Davis framed her speech as a thank you to Wilson for honoring the average man, “who happened to be a man of color.” 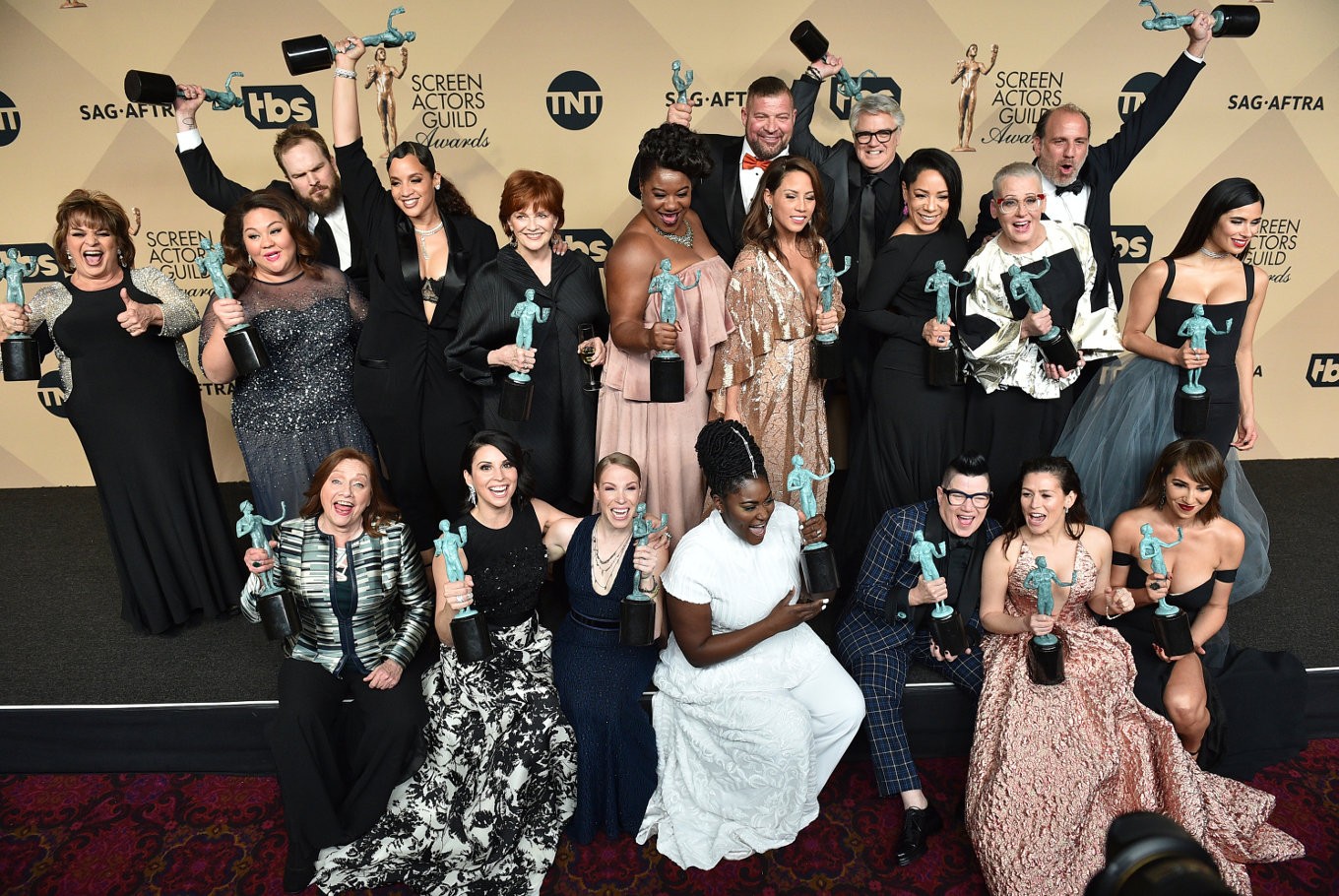 “We deserve to be in the canon, in the center of any narrative that’s written out there. And that’s what August did,” said Davis. “He elevated my father, my mother, uncles, who had 8th and 5th-grade educations. He just encapsulated them in history. So thank you, August.”

The hit Netflix series “Orange Is the New Black” won best ensemble in a comedy series for the third straight year.

“We stand up here representing a diverse group of people, representing generations of families who have sought a better life here from places like Nigeria, the Dominican Republic, Puerto Rico, Columbia, Ireland,” said star Taylor Schilling, while a cast member added “Brooklyn!” ”And we know that it’s going to be up to us and all you, probably, to keep telling stories that show what unites us is stronger than the forces that divide us.”

A pair of veteran actors took other TV honors: John Lithgow for best actor in a drama series (“The Crown”) and Bryan Cranston for his Lyndon Johnson in the HBO movie “All the Way.”

“La La Land” may have tied an Oscar record with 14 nominations, set a Golden Globes record with seven wins and won the top prize at Saturday’s Producers Guild Awards, but it wasn’t competing for the top Screen Actors Guild award. Nominated instead for best ensemble are the casts for “Moonlight,” ”Manchester by the Sea,” ”Hidden Figures” and “Captain Fantastic.”

Actors, the largest group in the motion picture academy, hold considerable sway. SAG, though, is much larger, with about 160,000 members, compared to about 1,200 actors in the academy.

Lily Tomlin was the lifetime achievement honoree. The 77-year-old actress gave a warm, rollicking speech that dispensed both drinking advice and regret over wasting “a lot of time being ambitious about the wrong things.”

“Did you hear? The Doomsday Clock has been moved up to two and a half minutes before midnight,” said Tomlin. “And this award, it came just in the nick of time.”