In Rwanda, less than 15 percent of the population has access to electricity. In rural areas, it can be as low as one percent.

In order to increase Rwanda’s energy capacity, a 17-hectare solar field with 28,000 panels was constructed in six months in 2014 by private power companies.

It is East Africa’s first large-scale commercial solar field, bringing in 8.5 megawatts of power at its peak — four percent of the country’s total power capacity. The project has brought power to more than 15,000 homes.

“We are living in the world and we have to contribute or to eradicate or eliminate polluting the atmosphere,” said Twaha Twagirimana, plant supervisor for Scatec Solar, which operates the project. “We need energy, and we need clean energy.”

Twagirimana said this investment in solar power is a step toward reducing global warming. Rwanda’s power grid relies heavily on diesel fuel, which is expensive and bad for the environment.

According to Scatec Solar, the solar field reduces carbon dioxide emissions by 8,000 tons per year.

Private homes aren’t the only ones to benefit from the project. The solar panels are on land owned by the Agahozo Shalom Youth Village. 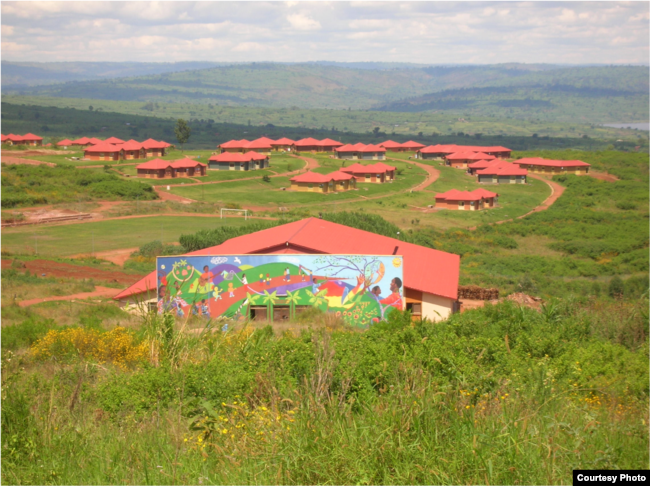 The choice of the site, about 60 kilometers from the capital, Kigali, was no accident. The rent paid for the land helps vulnerable children and young adults who were orphaned during or after Rwanda’s 1994 genocide.

About 500 young Rwandans live, study and play on the 144-acre residential community.

Mediatilice Kaytitesi, the community’s art center and theater coordinator, says she uses art to help youth cope with their losses.

“It’s something that can help open the mind of the kids,” she said. “Some draw tears, which means they have the tears in their hearts, their wounds. You can see their expressions.”

Pascal Atismani Claudien lost his father in 2006 and his mother in 2010. He said he doesn’t exactly know why they died — just that they were sick.

“When I have a problem, I take a paper and a pencil and draw and that problem goes away. When I have stress, I draw or paint,” said Claudien, who is starting his final year of high school at the village. “And when I am painting or drawing, I feel very happy.”

The Agahozo Shalom Youth Village was modeled after similar ones built for orphans in Israel after the Holocaust. In the Rwandan language of Kinyarwanda, Agahozo means “tears are dried.” In Hebrew, Shalom means peace.

“The mission was really to help bring back all the children who have lost parents and siblings and everything in their lives, to try to recreate the next best family that these children should have had, had their parents been alive,” explained Jean-Claude Nkulikiyimfura, the youth village’s executive director.

Claudien said he considers it more of a family than a school. “That’s why we call each other brothers and sisters,” he said.

During his time at the school, Claudien visited the nearby solar panels and learned from the staff about how Rwanda’s largest solar field is positively impacting the country. He, himself, is from a small village with limited access to electricity.

About 50 students also received technical training at the solar field on engineering and solar technology to encourage them to work in green jobs in the future.

The construction of the nearly $24 million solar field employed more than 350 Rwandan workers.

“Rwanda had the right leadership and the right conditions to be really the test case and the positive fruits of concept for the entire sub-Saharan Africa for commercial scale solar,” said Yosef Abramowitz, the CEO and founder of Gigawatt Global.

About 600 million Africans don’t have access to electricity, according to the International Energy Agency.

In 2016, Rwanda partnered with developer Ignite Power to provide rooftop solar to 250,000 houses by the end of next year. Users will pay about $5 per month for the solar power system in a rent-to-own model.

Efforts like this will go toward the Rwandan government’s goal of bringing power to 70 percent of households.

Abramowitz said he’s convinced “solar is the future of Africa.” His firm wants to replicate this model throughout sub-Saharan Africa, increasing energy capacity while also benefiting the social good.

“There’s every reason in the world — economic, social and political — that solar should be the main generation source of energy on the continent,” he said.

Difficult for Indonesia to Achieve its 5.2% GDP Growth Target

Difficult for Indonesia to Achieve its 5.2% GDP Growth Target