Pakistan’s northwestern tribal region, beleaguered for years by terrorism and lawlessness, has seen a decline in militant activities during the past few months as the result of government counterinsurgency operations, a recent security report says.

FATA Research Center (FRC), a non-governmental organization based in the capital of Pakistan, observed a decline of 19 percent in violent incidents during the second quarter of 2017 in the semi-autonomous Federally Administered Tribal Areas (FATA) along the border with Afghanistan.

The report also indicated, however, that banned terror outfits such as Tehreek-e-Taliban Pakistan, Jamat-ul-Ahrar, Islamic State of Khorasan and Lashkar-e-Jhangvi were still able to carry out terrorist attacks.

The 33-page report is based on terrorism-related data from all seven FATA tribal agencies covering April through June of 2017. It focuses on militant attacks and counterinsurgency measures, civilian and security forces casualties, tactics and strategies used by the militants and military operations and government airstrikes.

The report details a surge in counterinsurgency measures by the government during the period and reveals most counterterrorism attacks were executed in the Khyber Agency.

“Out of 61 counterterrorism operations, 19 intelligence-based operations and three aerial strikes were carried out in the Khyber Agency,” the report said.

The report says 100 violent attacks were recorded in the second quarter, down from 119 in the January-March period. Seventy of the fatalities from terror attacks in FATA region were civilians, including 45 who died in a twin suicide blast in late June that shook the main bazaar of Parachinar, headquarters of the Kurram Agency. Another 134 civilians were wounded, according to the report.

Some security and political analysts say measures taken by the government are commendable, but that Pakistan needs to make sure to keep insurgents and militants completely out of business in the volatile FATA region. 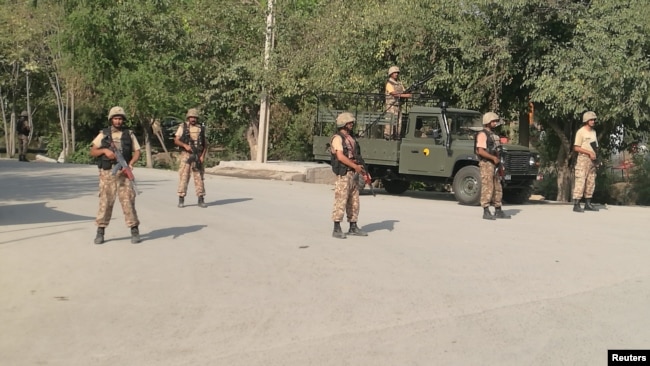 FILE – Pakistani Army soldiers stand guard at a street after suicide bombers attacked a Christian neighborhood in Khyber Agency near Peshawar, Pakistan, Sept. 2, 2016. Some security and political analysts say measures taken by the government against militants are commendable, but add that more needs to be done.

Decrease in numbers, but not severity observed

“Insurgent attacks in Khyber Pakhtunkhwa and other border areas may have decreased in number, but – as demonstrated by the June attacks in Kurram Agency, which killed over 60 people – not necessarily in severity,” Jonah Blank, senior political scientist with the RAND Corp., a global policy think-tank in Washington, D.C., told VOA.

“In the past, the Pakistani government has tried to redirect militant groups towards its own goals rather than actually disarming them. Both civilian and military officials say that is not the case any longer. Hopefully, this will be proven true,” Blank added.

Security analysts from Pakistan charge that the recent statistics are encouraging, though they also warn that the government needs to ensure the terrorists will not be able to re-establish their networks.

“There had been a drop in militancy in the tribal region,” Amir Rana, director of the Islamabad-based Pakistan Institute of Peace Studies, told VOA. “Pakistan’s government and army must now ensure to not allow the militants and insurgents of different banned terror groups to pave their way back and regain strength in areas of FATA that have been cleared after the military operations.”

Khyber Pakhtunwa’s government says the province had been a victim of terrorism for more than a decade now and has taken solid measures to curb militancy.

“It’s unrealistic to claim there is no militants’ presence in the province anymore,” Mushtaq Ghani, Minister for Information in Khyber Pakhtunkhwa’s government, told VOA, “But we have a strategy in place. Along with the military operations in FATA, we are working to enhance the capabilities of police, bomb disposal squads, counterterrorism departments and the intelligence bureaus.”

U.S. and Afghanistan officials have long accused Pakistan of being selective in its crackdown on militants. They claim Islamabad targets only groups, including TTP, that pose a threat to Pakistan’s interests, and overlook other militants who are using the country’s territory to plan attacks on Afghanistan and India.

Pakistan has denied those allegations and claims it is going after all militant groups operating in the region.