Protests Target Both NATO and Trump in Brussels

Protests Target Both NATO and Trump in Brussels

NATO leaders arrived in Brussels amid tight security for a summit Thursday dominated by the terrorist attack in Manchester, England.

It is the first encounter of many of the leaders with U.S. President Donald Trump, who during his campaign called the alliance “obsolete” for not effectively countering terrorism.

Recent terror attacks in Europe mean the U.S. leader may get the support he needs to strengthen the alliance’s anti-terrorist efforts.

Thousands of leftist demonstrators marched in central Brussels Wednesday, protesting against both NATO and Trump. Some carried picket signs and banners with obscenities insulting the U.S. leader. 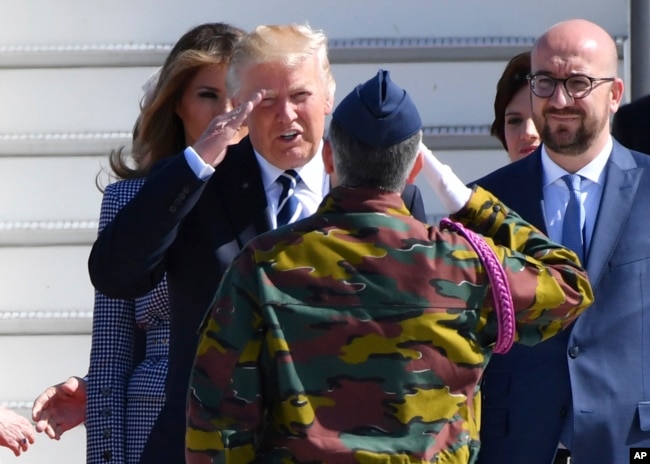 US President Donald Trump, second left, salutes a Belgian soldier as he arrives at Melsbroek Military Airport in Belgium, May 24, 2017. At right is Belgian Prime Minister Charles Michel.

Some said they actually welcomed Trump’s earlier criticism of NATO, but are now disappointed that he is engaging the alliance.

“Trump said good things during the campaign. He said America would not be involved in the whole world. I thought that was great,” demonstrator Frans de Maegd said.

“But now his government is pressured both by Democrats and the Republican establishment who have him by the neck and he has changed his thinking and has a policy as aggressive as (former U.S. President Barack) Obama’s,” de Maegd said, referring to military campaigns the U.S. supported in Syria, Libya and Afghanistan during the past administration.

Trump arrived in Brussels at a time when Europe is extremely tense following the terrorist attack in Manchester.

The Belgian government deployed about 4,000 police, some heavily armed, and soldiers in Brussels ahead of the summit. Soldiers were seen patrolling streets, hotel lobbies and the city’s underground metro system.

The mood is ripe for leaders to take decisive action against terrorism.

“The attacks we saw in Manchester will be something which will be addressed, I think actually by all leaders in one way or another, because the attacks were brutal and they deliberately targeted children, young people and families,” NATO Secretary Jens Stoltenberg told reporters.

Trump’s core message to members is a call to start spending their fair share, or 2 percent of their gross national income, on defense, something the NATO chief said is a goal for alliance members.

“We are making progress. After many years of decline, total defense spending by European allies and Canada rose by billions of dollars last year,” Stoltenberg said. 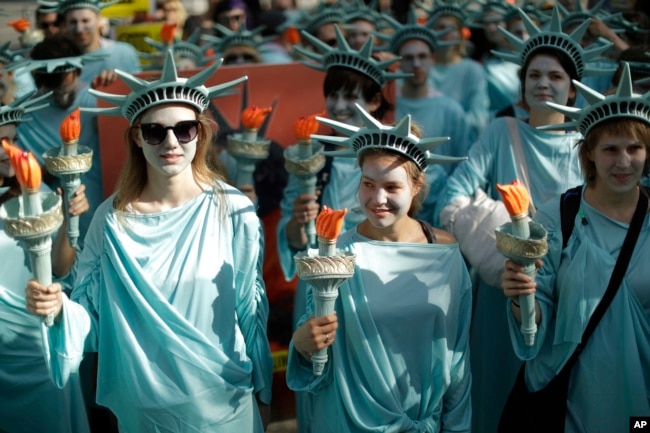 Protesters dressed as the Statue of Liberty march during a demonstration in the center of Brussels, May 24, 2017.

But spending more on defense is politically a hard sell for Western European countries with their hefty social welfare programs.

At a protest camp in Brussels, anti-NATO activists expressed concerns.

The NATO summit gets under way as recently elected French President Emmanuel Macron seeks to extend a state of emergency in France that was put in place in the wake of the 2015 coordinated Islamic State group attacks in Paris. It remains in place after further attacks in Nice and Normandy last year. 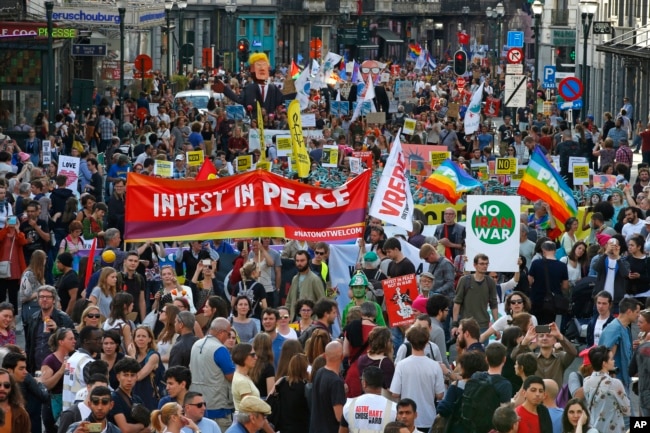 Protesters carry effigies of US President Donald Trump and Belgian PM Charles Michel during a demonstration in the center of Brussels on May 24, 2017.

“The state of emergency in France has been prolonged too many times,” Iverna McGowan, head of Amnesty International’s European Institutions office, said as she joined the demonstrators in Brussels Wednesday.

“While it’s so important to protect, of course, civilians against hateful or violent attacks, this cannot be to the detriment of the basic safeguards that protect all of our rights stand for the kind of society we want to live in,” McGowan said.

The recent spate of terrorist attacks in France and Britain mean NATO leaders will be more inclined to talk about war than peace.

This may not be the demonstrators’ day.

Ahok, Sex and a Ghost Story of Democracy

As the United States suffers the worst economic downturn in nearly a century, key questions remain: How quickly can...