Hundreds of demonstrators chanted “No ban, no wall, sanctuary for all!” and “no hate, no fear, immigrants are welcome here!” while gathering outside the airport’s Terminal Four arrivals section.

The protests came in response to passport holders from Arab countries being blocked on Saturday from passing through customs at US airports, while others were prevented from boarding US-bound planes.

On Friday, Trump signed an executive order to curb immigration and the entry of refugees from some Muslim-majority countries. He separately said he wanted the US to give priority to Syrian Christians fleeing the civil war there.

Trump placed a four-month hold on allowing refugees into the country and temporarily barred travelers from Syria and six other Muslim-majority countries.

The protest was attended by several New York-based organisations, including Make the Road New York, Jews for Racial and Economic Justice (JFREJ), Black Latino Asian Caucus members and The New York Immigration Coalition, among others.

“The purpose of our protest at JFK airport is two-fold. First, we are demanding the safe release of refugees and other visa-holders, all of whom cooperated with a long and grueling vetting process in order to get here,” she said.

“Additionally, the central message of our protest is that we are all immigrants or children of immigrants and refugees. The executive order is not only inhumane; it is absurd and hypocritical,” she added, pointing out that the ban came into effect on Holocaust Remembrance Day (Friday). 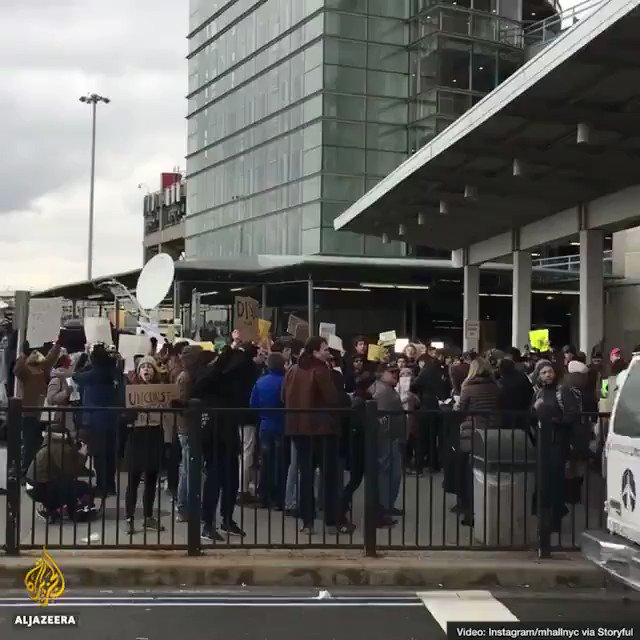 “They go against everything our country aspires to stand for,” she told Al Jazeera at the protest.

Fouzia, who has lived in New York City for ten years, added: “We are here to make sure every single held in JFK will be released… we have to take down the policy.” 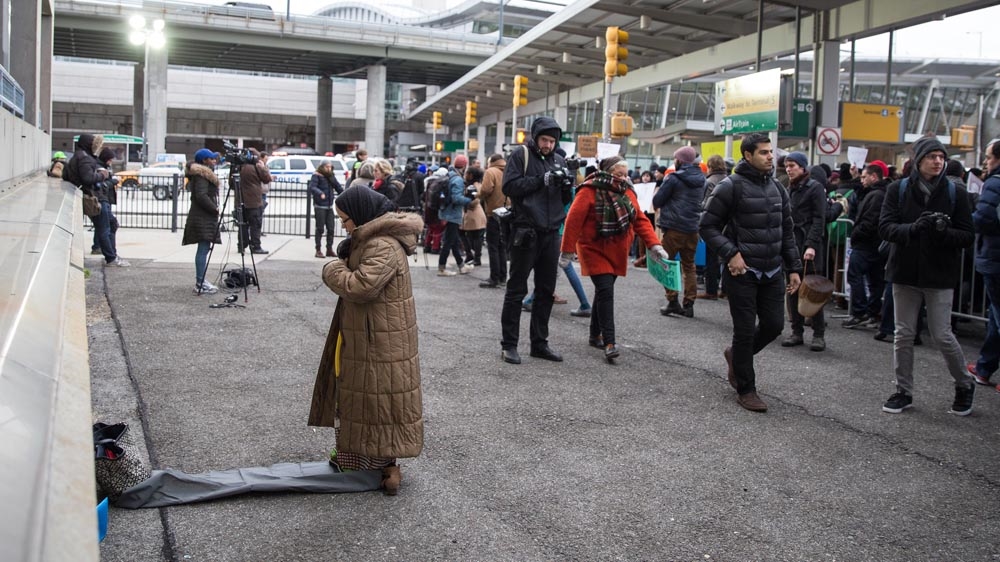 Other protests were expected to take place at airports in San Francisco and Washington, DC, among other US cities.

Immigrants from the seven countries have been blocked from bordering US-bound planes in Lebanon, Egypt, United Arab Emirates and elsewhere.

Legal representatives for two Iraqi men filed lawsuits against the Trump and the US government on Saturday, according to the American Civil Liberties Union (ACLU), a rights group.

Both men had ties to the US military and were had visas. They were detained on Friday night in JFK Airport.

“President Trump’s war on equality is already taking a terrible human toll. This ban cannot be allowed to continue,” said Omar Jadwat, director of the ACLU’s Immigrants’ Rights Project, in a statement .