Philippine military jets fired rockets at militant positions Saturday as soldiers fought to wrest control of a southern city from gunmen linked to the Islamic State group, witnesses said. Civilians waved flags from their windows to show they are not combatants.

The city of Marawi, home to about 200,000 people, has been under siege by IS-linked militants since a failed raid Tuesday night on a suspected hideout of Isnilon Hapilon, who is on Washington’s list of most-wanted terrorists. Isnilon got away, and fighters loyal to him took over parts of the city, burning buildings and seizing about a dozen hostages, including a priest. Their condition is unknown.

Where will ISIS strike next in the Philippines? 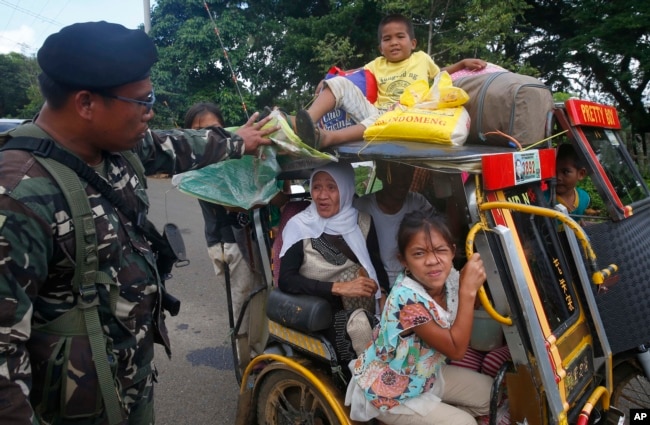 Residents fleeing the besieged city of Marawi are questioned at a checkpoint by government soldiers, May 26, 2017.

The violence prompted President Rodrigo Duterte to declare martial law in the country’s south, where a Muslim rebellion has raged for decades.

“I saw two jets swoop down and fire at rebel positions repeatedly,” Alexander Mangundatu, a security guard, told The Associated Press in Marawi as a plume of black smoke billowed in the distance. “I pity the civilians and the women who were near the targeted area. They’re getting caught in the conflict and I hope this ends soon.” 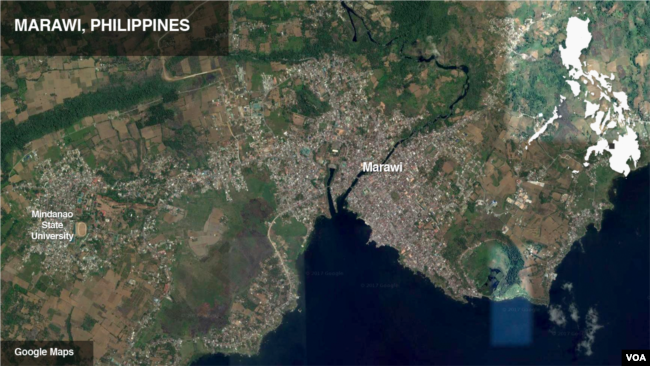 Military spokesman Brig. Gen. Restituto Padilla said government forces are working to “clear the city of all remnants of this group.”

On Friday, Duterte ordered his troops to crush the militants, warning that the country is at a grave risk from the Islamic State group.

At least 44 people have died in the fighting, including 31 militants and 11 soldiers, officials say. It was not immediately clear whether civilians were among the dead. The violence has forced thousands of people to flee and raised fears of growing extremism. 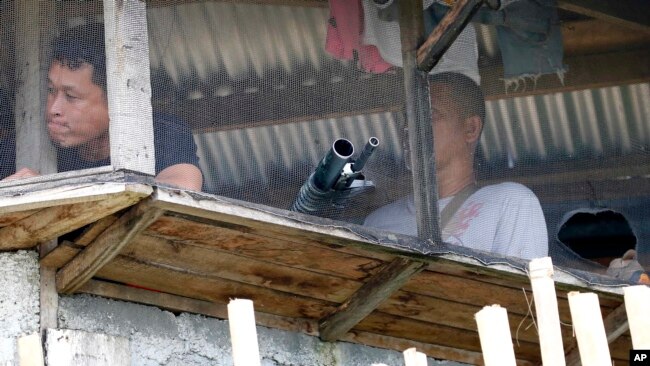 Government troops man their position as they continue to battle Muslim militants who lay siege in Marawi city, southern Philippines, May 27, 2017. Philippine military jets fired rockets at militant positions Saturday as soldiers fought to wrest control of the city.

Duterte gave his troops a free hand to wrest control of Marawi.

“You can arrest any person, search any house without warrant,” said Duterte, who has been criticized for the deaths of thousands of people in a crackdown on illegal drugs.

Hapilon is still hiding out in the city under the protection of gunmen who are desperately trying to find a way to extricate him, the country’s military chief said.

“Right now, he is still inside (the city),” Gen. Eduardo Ano told the AP. “We cannot just pinpoint the particular spot.”

He said Hapilon suffered a stroke after a government airstrike wounded him in January.

In a sign that the long-standing problem of militancy in the south could be expanding, Solicitor General Jose Calida said foreigners were fighting alongside the gunmen in Marawi, including Indonesians and Malaysians.

Hapilon, an Islamic preacher, is a commander of the Abu Sayyaf militant group who pledged allegiance to the Islamic State group in 2014. He also heads an alliance of at least 10 smaller militant groups, including the Maute, which have a heavy presence in Marawi and were instrumental in fighting off government forces in this week’s battles.

All of the groups are inspired by the Islamic State group, but so far there is no sign of significant, material ties.

Study: Too Little Sleep Doubles Mortality in Those With Heart, Diabetes Risks

Study: Too Little Sleep Doubles Mortality in Those With Heart, Diabetes Risks