India, China bring in heavy equipment and weaponry to their rear bases near eastern Ladakh

No Content Available
Peru’s Congress formally accepted the resignation of President Pedro Pablo Kuczynski (PPK) Friday, as First Vice-President Martin Vizcarra was sworn in as the country’s new president. Vizcarra, who is also Peru’s ambassador to Canada, called for “faith and optimism” when he arrived in Peru on Thursday ahead of his midday swearing-in ceremony.
On Friday morning, PPK threatened to withdraw his resignation from the presidency if Congress decides to proceed with impeachment proceedings against him. In a message posted to his official Twitter account shortly after 8 a.m. Friday Kuczynski said the fact that Congress was considering a “legislative resolution” was “unacceptable.” 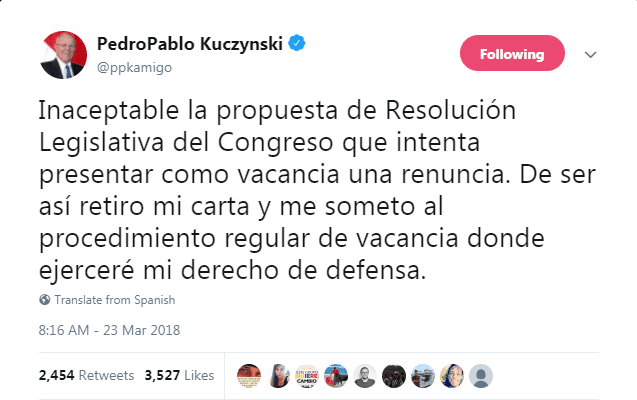 Kuczynski translated message reads: “Unacceptable is the proposed legislative resolution of Congress which seeks to present a waiver as a vacancy. If it remains that way, I’ll withdraw my (resignation) letter and submit myself to a proper impeachment process where I can exercise my defense.”

If this option was pursued, he said he would withdraw his resignation letter and “submit to the regular vacancy procedure where I exercise my right of defense.” Kuczynski, a former Wall Street banker, resigned Wednesday after accumulating multiple accusations of corruption. Reuters reported that it was unclear if Kuczynski could legally withdraw his resignation.

Vizcarra, sworn in at around midday Friday, called for “faith and optimism” when he arrived in the country Thursday: “Peru can always overcome.” However, left-wing political movement New Peru and half of Peru’s voters believe Vizcarra should call for new elections instead of governing until 2021.

New Peru leader Veronika Mendoza believes Vizcarra should promote constitutional reform and call general elections at the earliest opportunity: “When we talk about new elections, we are talking about elections with new rules to ensure that those who led us to this crisis don’t come back.”

India, China bring in heavy equipment and weaponry to their rear bases near eastern Ladakh

Astronauts on board the Dragon successfully docked at the International Space Station Sunday morning, 19 hours after the successful...