North Korea has fired three ballistic missiles into the sea off its east coast, say US and S Korean officials.

The missiles were launched from the Hwangju region, said South Korea’s Joint Chiefs of Staff (JCS) and flew about 500km (310 miles) to 600km.

The US said the first two were believed to be short-range Scuds while the third was a mid-range Rodong or Nodong.

It comes after the US and South Korea said they would deploy an anti-missile system to counter the North’s threats.

North Korea is barred by UN sanctions from any test of nuclear or ballistic missile technology. But tensions have soared since it carried out its fourth nuclear test in January.

South Korea’s Prime Minister Hwang Kyo-ahn said missile tests had been “a rare phenomenon in the past” but had been taking place “continuously” this year.

“The threat to our national security has grown very quickly in a short period of time,” he said.

It has also conducted several launches in recent months, including a test of mid-range missiles in June which were considered its most successful yet.

Seoul has said activity detected recently in North Korea indicates it could be preparing to conduct a fifth nuclear test imminently.

The latest launches happened between 05:45 local time (20:45 GMT on Monday) and 06:40, the South’s military said, in a statement quoted by the Yonhap news agency.

“The ballistic missiles flight went from 500km to 600km, which is a distance far enough to strike all of South Korea including Busan,” South Korea’s military said in a statement. Busan is a port city in the south.

The US Strategic Command said it had tracked the launches, but that they had posed no risk to US interests.

Japan’s Defence Minister Gen Nakatani echoed the condemnations, saying the launches were “an act of provocation that undermines regional and international security,” and adding that Japan “will take all possible measures to deal with any situation”.

What is the Terminal High Altitude Area Defense System (THAAD)? 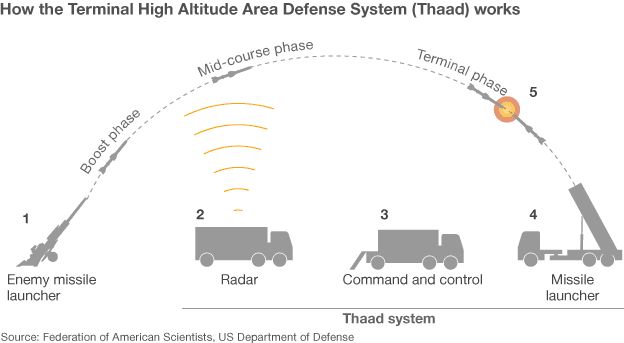 1. The enemy launches a missile

2. The Thaad radar system detects the launch, which is relayed to command and control

3. Thaad command and control instructs the launch of an interceptor missile

4. The interceptor missile is fired at the enemy projectile

5. The enemy projectile is destroyed in the terminal phase of flight

The launcher trucks can hold up to eight interceptor missiles. 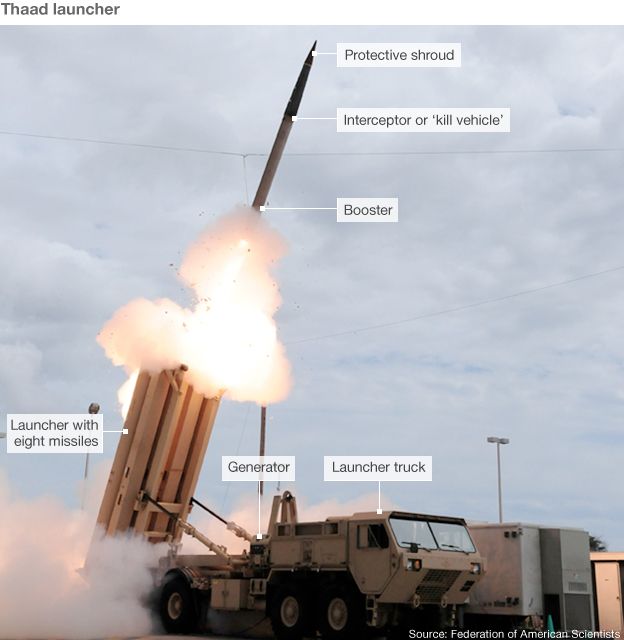 JCS spokesman Jeon Ha-gyu condemned the launches as “a provocative action which poses a grave threat to our national security and our people”.

He said it was an “armed protest” to the planned deployment of the Terminal High Altitude Area Defense (THAAD) anti-missile system.

South Korea has said the system will be based in the town of Seongju, in the south-east, where the move had faced local opposition.

The North’s military had warned it would retaliate with a “physical response”.

China has also criticised the decision, saying it will destabilise security in the region.