With fires crackling in the peat soils, smoke billowing up and hot ash raining down just a stone’s throw from his house, farmer Arif Subandi chokes up as he surveys the scene.

“Now our land is burned, our environment neglected,” he says, sobbing. “Where will my children and grandchildren go?”

The 48-year-old father of five, who lives just outside the capital of Indonesia’s West Kalimantan Province on Borneo, says he doesn’t have enough to support his family. He’s worried about local companies trying to take the land from him.

The fires can be hard to extinguish. “We’re in the bush,” Subandi explains. “These are ferns. And the fire burns the dry roots beneath us. During the dry season, the fire can burn three feet or more underground.”

On top, the peat is a dry, loose, spongy tangle of roots and leaves. Subandi sticks his hand through the top layer up to his elbow, and pulls up a handful of dirt. It’s wetter and more compacted, showing what happens as the decaying vegetation sinks and mixes with the water below.

It’s been just over a year since massive forest fires ravaged the Indonesian island of Borneo, throwing millions of tons of carbon into the atmosphere and sickening thousands. Some observers called it the worst environmental disaster of the century so far. Peat fires and deforestation contribute to Indonesia’s status as one of the world’s top carbon emitters.

Indonesia responded by banning the use of fire in clearing peat lands, and by naming and shaming companies responsible for setting some of the fires. With help from a wetter rainy season, fires last year were down more than 80 percent compared to 2015.

Indonesia is home to half the world’s tropical peat lands, and the catastrophe focused unprecedented attention on their importance. Despite being illegal, clearing peat land by fire remains widespread in Indonesia, as it is the cheapest way to clear land for agriculture and industry.

Peat is basically made up of decaying plants underwater. It is one of nature’s most effective ways of taking carbon out of the atmosphere and storing it underground, which helps mitigate global warming. But when the peat swamps are drained and burned, they release some 10 times more carbon than forest fires. 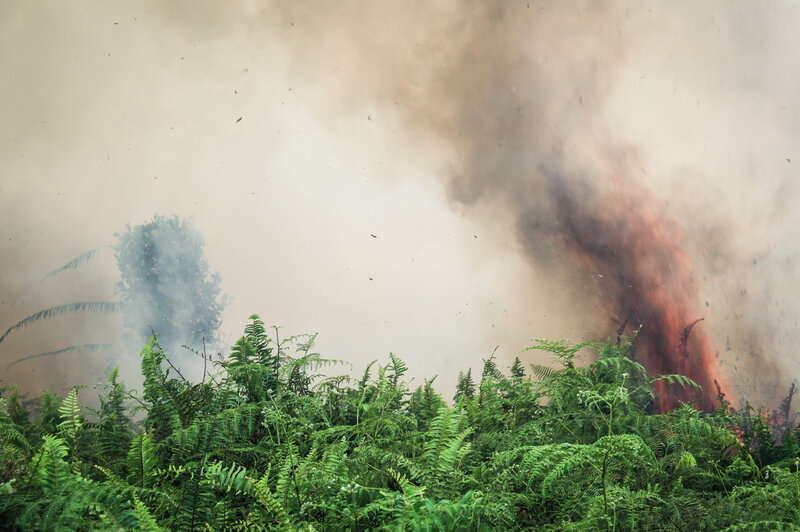 Smoke and flames rise from a peat fire in West Kalimantan Province. Peat fires and deforestation contribute to Indonesia’s status as a leading carbon emitter.

Subandi’s story illustrates the issues of population pressures on the peat lands, unclear land rights and complicated economic and political issues that result in peat fires.

Subandi says he moved with his parents from the island of Java to Borneo in the early 1970s. Many of today’s peat land residents were moved there by the government to ease population pressures on more crowded islands.

When Subandi’s family arrived in Kalimantan Province, sun bears, monkeys and wild boars still roamed the intact peat forests. Trees were so big, Subandi says, it took three or four people to wrap their arms around some of them.

Subandi says his family worked hard to make the land arable. They felled trees with axes, saws and machetes and used the timber to build their homes. They dug canals to drain the peat swamps, and then planted the land with corn and rice.

As Subandi’s family grew, he built a second house to stake his claim to a plot of communally owned village land. But he says a local Yamaha motorcycle dealership has tried to take some land near his first house, and he is concerned that a palm oil company is about to encroach on land near the second.

He said men from the motorcycle dealership tried to give him money for the land. “They said, ‘If you don’t take the compensation and move, you will face the consequences,'” he recalls. “We understood what they were implying. We felt threatened.”

A representative of a local organization that supports small farmers in West Kalimantan told me that a palm oil firm had claims on about half the land in Subandi’s village, but had not started planting there yet. NPR was not able to contact either the palm oil firm or the motorcycle dealership.

The organization representative said the chief of Subandi’s village was working as an agent for the palm oil firm, something the chief denies.

“There’s just no legal clarity for anyone, and everyone suffers,” says Erik Meijaard, founder of the Brunei-based environmental group Borneo Futures.

Legal uncertainty about land ownership “is creating this push for rapid and often unsustainable use of natural resources and land,” he says. That includes the use of fire to clear peat.

Many environmental groups blame big palm oil and pulp and paper plantation owners as the worst offenders, but Meijaard says the distinction between big and small players is an artificial one.

“Everyone is trying to make a buck,” he says. 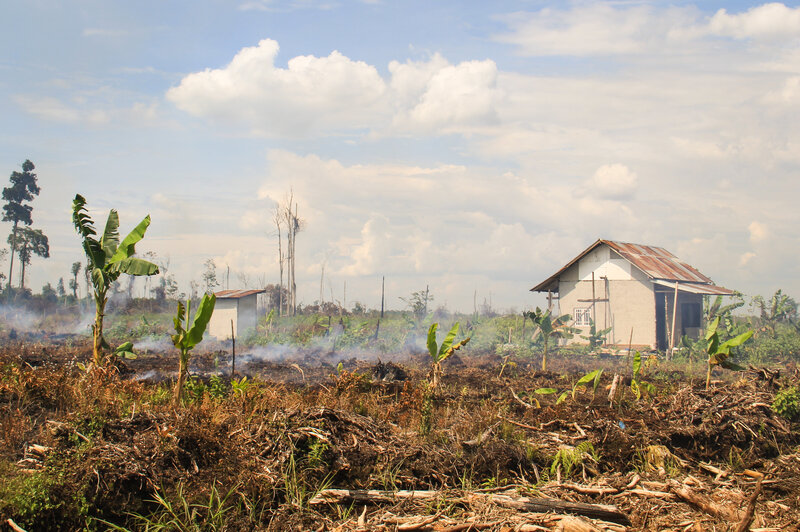 Smoke rises from smoldering fires on peat land in the village of Punggur Kecil, West Kalimantan Province. Despite being illegal, clearing peat land by fire remains widespread in Indonesia, as it is the cheapest way to clear land for agriculture and industry.

Before the 1960s and 1970s, he says, very few Indonesians were living on peat lands. The soil is acidic and not suited to farming. More importantly, he says, most peat is on coastal lowlands, and draining that peat for industry or agriculture is, in the long run, a losing proposition.

Peat naturally sinks and after 30 or 40 years, will disappear. “What you end up with,” Meijaard says, “is basically a hollowed-out area where seawater will come in and you end up with an area that’s totally unproductive for anything” – a situation all too familiar in Meijaard’s native Netherlands.

But as far as Indonesia’s government is concerned, moving all inhabitants off of the country’s peat lands “is not an option,” says conservationist Nazir Foead, named last year to head the country’s new Peatland Restoration Agency.

He says people living on peat lands have rights that should be respected.

“They spent almost all of their fortune to buy a piece of land in that area,” he says, “and I think it’s wiser to help them earn their living, but adaptive to the wet ecosystem.”

That means planting crops suited to peat lands, such as sago and pineapple. It also means, Foead says, clearing land without fire — even if that requires greater inputs of labor, time or capital.

Despite the challenges, Foead says Indonesia’s President Joko Widodo is committed to restoring the peat lands.

“I see everything is lining up,” Foead says. “We need to get a few very important successes on the ground that drive markets and investors to adopt sustainable practices.”

Nearly half of Indonesia’s nearly 60,000 square miles of peat lands are still intact. The government has begun re-wetting the drained areas. Foead says if Indonesia can protect its intact peat lands and restore the degraded ones, it will save about a gigaton of carbon emissions a year, more carbon than Germany — with an economy five times as big as Indonesia’s — emits in a year.

And that, Foead says, could set an example for others.

“We will inspire tens of countries,” he says. “This is what you can do, if you do it right.”

That goal remains many years off. For now, Foead’s agency is aiming to restore 10 percent of Indonesia’s degraded peat lands by 2020.