North Korea strongly criticized Tuesday the U.N. Security Council’s decision to impose tough new sanctions against the East Asian nation, and warned the United States would experience the “greatest pain” for playing a leading role in the effort.

North Korea, Han said without elaborating, is poised to “use a form of ultimate means.” North Korea had warned before the latest sanctions were imposed that the U.S. would pay “due price” if it pushed for stronger sanctions.

U.S. President Donald Trump told reporters at the White House Tuesday the new sanctions are “just another very small step” and “nothing compared to what ultimately will have to happen” regarding North Korea.

Aside from North Korea, reaction in Asia to the latest round of international sanctions has been positive, but many are still skeptical they will have any significant impact.

The new round of economic sanctions against North Korea were in response to its September 3 nuclear test of a possible hydrogen bomb.

“Today we are saying that the world will never accept a nuclear-armed North Korea,” U.S. Ambassador Nikki Haley told the council Monday evening. “And today the Security Council is saying that if the North Korean regime does not halt its nuclear program, we will act to stop it ourselves.” 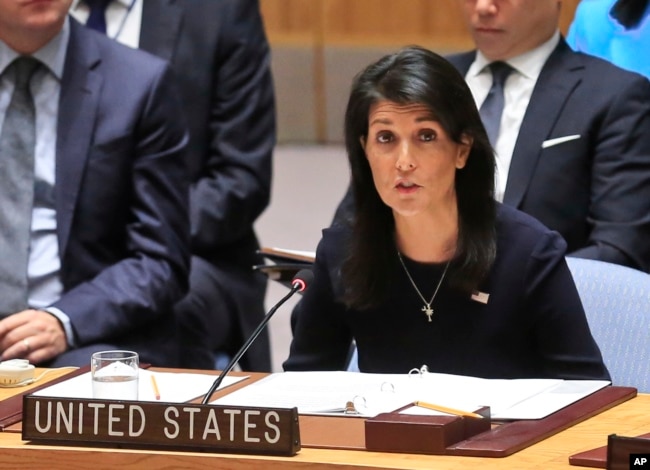 If fully implemented, the new sanctions would significantly reduce North Korean access to international currency and fuel needed for its banned ballistic missile and nuclear programs by:

The previous round of U.N. sanctions imposed on North Korea in August banned the country’s $3 billion coal, iron, lead and seafood export industries.

Haley said the purpose of the increasing sanctions is to convince the Kim government to end its threatening nuclear missile development program in exchange for sanctions relief, economic aid and security guarantees.

“We are not looking for war,” she said. “The North Korean regime has not yet passed the point of no return. If it agrees to stop its nuclear program, it can reclaim its future. If it proves it can live in peace, the world will live in peace with it.” 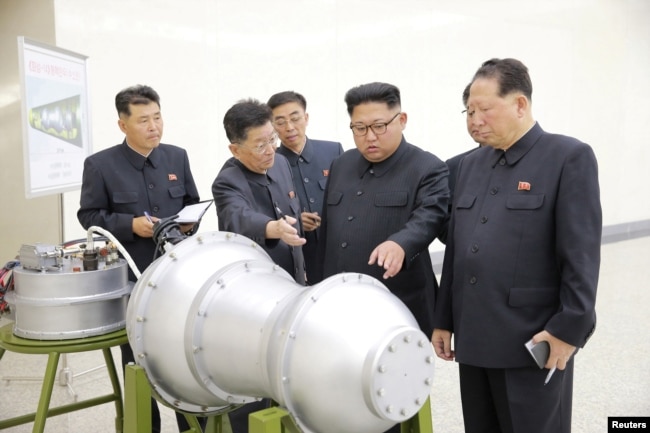 South Korea’s presidential office said on Tuesday the new U.N. sanctions send a united message that the international community will never accept a North Korea as a nuclear state.

“The only way for it to get out of diplomatic isolation and economic pressure is to come back to the dialogue table for complete, irreversible and verifiable nuclear dismantlement,” said presidential spokesman Park Soo-hyun

“It’s important to change North Korea’s policy through pressure that is stronger than they’ve ever seen,” said Abe.

The United States had sought much stronger sanctions, including a complete oil embargo, an asset freeze on leader Kim Jong Un, and authorization to use military force if necessary to interdict ships suspected of smuggling banned items.

But China and Russia, which both hold veto power in Security Council, would only agree to the compromise version enacted, and both expressed their determination to see a return to dialogue to resolve the issue.

Beijing and Moscow have urged the United States to suspend its joint military exercises with South Korea in exchange for a North Korea nuclear freeze, but the U.S. representative to the U.N. dismissed the proposal as insulting.

Washington and its allies say these legitimate defensive measures are not comparable to the North’s threatening nuclear program that has been banned and sanctioned by the United Nations Security Council. 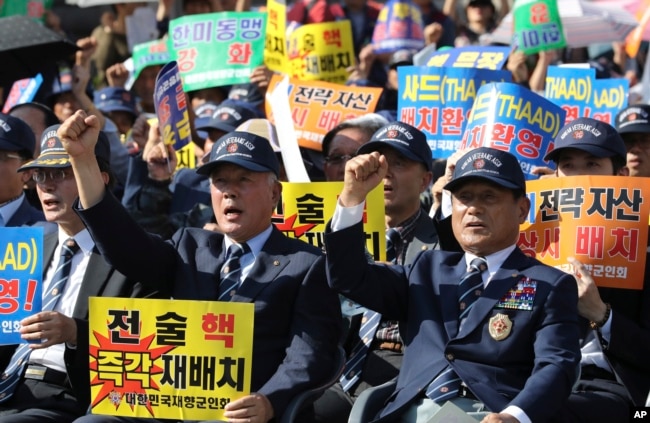 Many advocates for the Trump administration’s “maximum pressure” strategy to coerce the leadership in Pyongyang to give up its nuclear program say this latest round of sanctions is still not strong enough.

“It’s really not comprehensive enough, or serious enough, really cutting enough to cause the North Koreans any huge problems, as I see it. But it does allow the Trump administration to say that at least it tried,” said regional security analyst Grant Newsham with the Japan Forum for Strategic Studies in Tokyo.

If this U.N. resolution fails to deter the Kim government, Newsham said, the United States would be justified to pursue secondary sanctions against Chinese banks and entities that do business with North Korea.

However on Tuesday some of China’s major state-owned banks reportedly stopped providing financial services to new North Korean clients, in what could be a sign of increased sanctions enforcement to prevent any U.S. retaliation.

Critics of a sanctions only approach say North Korea will not unilaterally disarm, no matter the amount of pressure applied, and that significant incentives and compromises must be offered to peacefully resolve the nuclear stand-off.