Thousands of people have fled their homes following two days of violence in a deepening crisis in the state of Rakhine in Myanmar.

Members of the Muslim Rohingya minority escaped to the border with Bangladesh but Bangladeshi border guards are turning them back.

Pope Francis has appealed for an end to persecution of the Rohingya people.

They face severe restrictions inside mainly Buddhist Myanmar, where tensions with the majority population have been rumbling for years.

Tens of thousands of Rohingya fled to Bangladesh previously, accusing the Myanmar authorities of ethnic persecution.

Rakhine, the poorest region in Myanmar, is home to more than a million Rohingya. Extremism among them has grown out of the restrictions the group faces, the BBC’s regional editor for Asia/Pacific, Michael Bristow, says.

‘They pleaded with us’

Bangladeshi police said they had forced 70 people back into Myanmar on Saturday after finding them trying to make their way to a refugee camp, having entered Bangladesh in the Ghumdhum border area.

“They were pleading with us not to send them back to Myanmar,” said one policeman.

But some 3,000 Rohingya have managed to enter the country and find refuge in camps and villages since Friday, AFP adds.

A correspondent for the news agency at a makeshift camp in Balukhali says that many brought tales of horror from over the border.

“They fired so close that I cannot hear anything now,” Mohammad Zafar, 70, said of armed Buddhists who had shot dead his two sons in a field.

“They came with rods and sticks to drive us to the border.” 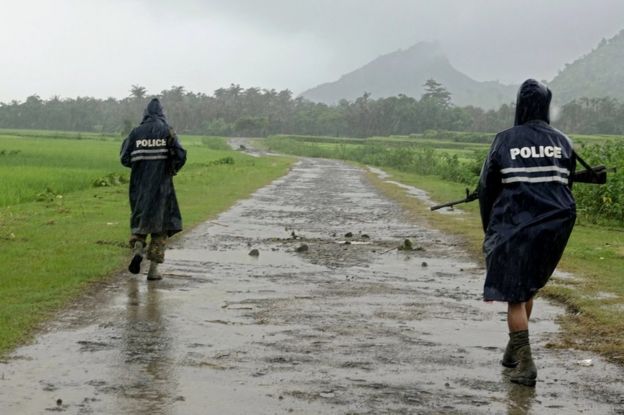 Amir Hossain, 61, told Reuters news agency near the village of Ghumdhum: “Please save us. We want to stay here or else we’ll get killed.”

Meanwhile, around 4,000 non-Muslims in Rakhine were evacuated by the army for their own safety. Six people were killed when they strayed into one area of conflict.

Pope Francis said in a statement: “Sad news has arrived of the persecution of the religious minority, our Rohingya brothers.

“I would like to express my full closeness to them. Let us all ask the Lord to save them, and to elicit men and women of goodwill to help them, for them to be given their full rights.”

This is the most significant outbreak of violence in Rakhine since October 2016, when nine policemen died in similar attacks on border posts. The government said they were carried out by a previously unknown Rohingya militant group.

The attacks triggered a military crackdown that led to widespread allegations of killings, rape and torture of Rohingya, and an exodus of Rohingya into Bangladesh.

The UN is currently investigating alleged human rights abuses by the security forces, who deny wrongdoing.

HELSINKI  —   The Baltic nation of Latvia has banned the state-controlled Russian television channel RT, saying that it...