“Ethan Hunt is the living manifestation of destiny.”  This is not only the so-ridiculous-that-it’s-actually-brilliant statement Alec Baldwin delivers to the UK Prime Minister with a straight face in Mission: Impossible – Rogue Nation (M:I-5).

It’s also a fitting summary for the entirety of Hollywood’s greatest running action franchise, as well as its near-flawless latest installment, Mission: Impossible – Fallout (M:I-6), starring one of Planet Earth’s few remaining mega movie stars: Tom Cruise. When his relentless ‘Impossible Mission Force’ (IMF) agent Ethan Hunt is near any trouble of catastrophic proportions—either within a jumping distance from the rooftop across or the helicopter above—you know things are destined to work out in the end and the universe’s most villainous enemies are going to fall to their eventual demise. Even if it means the morally principled Hunt has to put his own life at fatal risk to save those he loves, damn it.

Lucky for him (and for the rest of us, adrenaline addicts, desperately craving our M:I fix every few years), Hunt has managed to successfully complete all his 6-films-worth-of-missions he chose to accept with “only” a severely broken ankle. And to clarify, when I say Hunt, I actually mean Cruise, who’s been steering the M:I ship ever since director Brian de Palma lit the fuse for the first film, adapted from the beloved TV series of impressive face masks and retro gadgets.

Famously doing his own mind-blowing stunts with as little green screen as possible (remember that Burj Khalifa skyscraper climb in Ghost Protocol?), Cruise apparently came very close to facing his own destiny during the filming of Fallout (by the returning writer-director Christopher McQuarrie, the series’ only repeat filmmaker), and lived to tell the tale with a shattered limb. The logic-defying London building jump that caused his injury is actually a scene in the film. 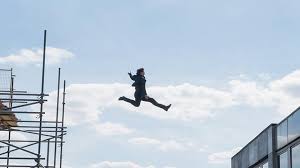 As Graham Norton puts it here upon viewing the footage from various angles, “this is why Tom Cruise gets paid the big bucks,” folks. For further context, take a look at the star’s Twitter profile: “Running in movies since 1981,” his bio simply says. Rest assured, that’s exactly what Tom Cruise, the runner, continues to do in the terrific and terrifying Fallout, including directly after the stunt-in-question. “What about his broken ankle,” you might rightfully ask. Well, who has time to waste with that minor detail when the planet’s future hangs in balance and Henry Cavill’s shady, disagreeably mustached CIA agent August Walker is on the loose? Tom Cruise, we appreciate your sacrifice.

Returning as Ilsa Faust, a marvelously Lauren Bacall-esque character first introduced in Rogue Nation, Rebecca Ferguson refers to the task in Fallout as “a suicide mission“. On an incompatible mission of her own, Faust is far from wrong. In this world, there are twists within twists (who is better at gotcha than McQuarrie, the Oscar-winning screenwriter of The Usual Suspects), friends within fiends and nothing is what it seems.

But the team’s rough purpose simply boils down to securing three identical nuclear weapons from a terrorist group called “The Apostles”; a collective who wants to destroy today’s dysfunctional world order and start things from scratch, under the leadership of a mysterious figure called John Lark. To stop him, Hunt (as usual) is joined by his IMF counterparts Luther (Ving Rhames) and Benji (Simon Pegg), receives the support of the newly minted IMF head Alan Hunley (Baldwin), and hindered by the CIA yet again.

After Hunley’s switch to the IMF in the previous film, the contrastingly by-the-book intelligence agency finds a new leader in the no-nonsense Erika Sloane (Angela Bassett), who puts Cavill’s Walker to task to tail the IMF. Also in the mix are Hunt’s ex-wife Julia (Michelle Monaghan), and a brand-new femme fatale named White Widow (Vanessa Kirby, absolutely breathtaking in every sense of the word), a coldly iniquitous dealer. Yes, it’s a crowded field of players and you need to pay attention to connect all the dots.

Since this is a direct sequel to Rogue Nation, I’d strongly recommend that you watch it before diving into Fallout, if for no other reason than basking in the seductiveness of the Hunt-Faust chemistry. Their tense byplay comes with a glorious back-story of equals, which at once feels both old-fashioned and hopelessly romantic. And this combo is why the M:I franchise continues to work. Its muscle is always backed with strong morals (evident in every turn in Fallout) and its heart, beneath its injured body, is perennially light with memorable humor.

Here’s another, equally important reason why the series has managed to maintain and even up its appeal with every chapter: its utmost dedication to avoiding mind-numbing action. If you want to munch your popcorn while stuff aimlessly gets blown up in frustratingly incoherent action scenes, you might want to consider taking your motorbike elsewhere.

Despite being the biggest, boldest and loudest M:I movie to date, every single Fallout action sequence, may it be a high-speed pursuit or a HALO jump, remains impeccably constructed and tightly edited to maximum heart-stopping impact, thanks to both the cinematographer Rob Hardy and editor Eddie Hamilton. If you can dare to breathe during its superbly orchestrated finale (set in Kashmir, actually shot in New Zealand), in which Cruise dangles from a helicopter and swings on the sharp edges of rocky mountains with a precarious hook and his bare hands, you’re made of stronger stuff than I am.

Full disclosure: after seeing Fallout, I restlessly paced my apartment like a maniac and reached for hard liquor to calm the f* down. When I finally achieved a relaxed state, I began noticing I missed a crucial thing in this otherwise superb movie: a quiet and contained centerpiece, akin to De Palma’s masterful Langley sequence in the first M:I, Brad Bird’s aforementioned Burj Khalifa scene in Ghost Protocol, and the underwater mission in McQuarrie’s own Rogue Nation.

While McQuarrie certainly nods to his predecessors with Fallout—there is even a superbly pulled off, martial-arts-y bathroom fight scene reminiscent of the John Woo directed fist battles of M:I-2—he takes the signature heart-pound of the series several steps further. The set pieces feel longer (nothing will prepare you for the hysterical opening involving a Wolf Blitzer cameo), the motorcycle chases seem crazier (McQuarrie admits to honoring Claude Lelouch’s short Rendezvous with the insane Paris-set pursuit they filmed with a helmet-less Cruise) and the whole package ticks like a bomb with personal and global stakes higher than ever before.

While that missing centerpiece mission with a controlled scope is an unfortunate neglect, the stunning finale that measures up to the finest set pieces of Dunkirk and Mad Max: Fury Road considerably lessens the pain of its absence. After two hours and twenty-seven minutes of non-stop Cruise’ing, it won’t be exhaustion you’ll feel, but a hunger for more. Keep running, keep dreaming, keep surviving, Tom Cruise. We sure as hell can use an unbeatable flesh-and-blood screen hero with real, breakable muscles these days; one who peels himself off the ground when he falls and sprints forward despite the odds.

Forbes Releases 2018 List of the World's Most Valuable Sports Teams