MH370: Search for missing plane to be suspended not shut down

MH370: Search for missing plane to be suspended not shut down

China, Malaysia and Australia will suspend rather than shut down the search for Malaysia Airlines flight MH370, after the current area has been scoured.

They had previously agreed to end the search by July or August if no “credible new information” was found.

The plane, with 239 passengers and crew, disappeared in March 2014.

Many of their relatives have said they do not want the search to end until the plane is found.

The search, led by Australia, has been using underwater drones and sonar equipment to scour a 120,000 sq km search zone in the southern Indian Ocean where the plane is presumed to have crashed. Nothing related to MH370 has been found in the area.

However a few pieces of debris confirmed to be from a Boeing 777 have washed up on various islands thousands of miles from the search zone. MH370 is the only missing Boeing 777 in the world.

There is little detail about the circumstances under which a search might be resumed, but Reuters quotes Malaysia’s transport minister as saying this does not mean the authorities have given up on finding the plane.

After a meeting of ministers from the three countries in Malaysia a letter was sent to the families with the decision, Channel News Asia reported.

“The ministers agreed that should the aircraft not be located in the current search area, and in the absence of credible new evidence leading to the identification of a specific location of the aircraft, the search would not end, but be suspended upon completion of the 120,000 square kilometre search area,” it said according to Channel News Asia.

More than 110,000 sq km of the seafloor has been searched so far, but poor weather has caused delays to the search operation in recent weeks, the Joint Agency Coordination Centre said earlier this month. 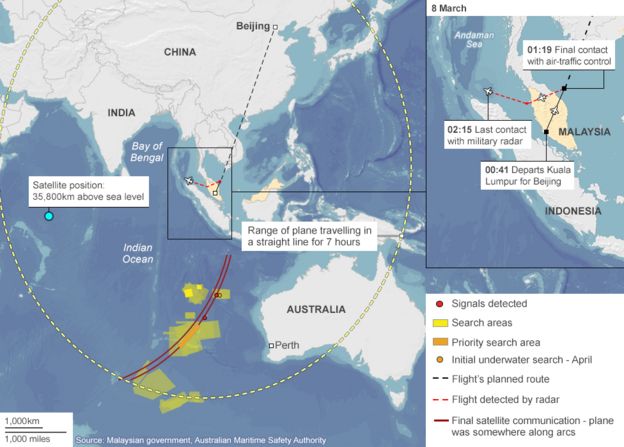