U.S. Senator John McCain said Monday he views Russia and its president, Vladimir Putin, as the “greatest challenge we have,” even more so than that posed by the Islamic State group.

Speaking during a visit to Australia, McCain told the Australian Broadcasting Company Russia has tried to “destroy the very fundamental of democracy” with efforts to influence the U.S. presidential election and others elsewhere in the world.

The comments come as U.S. President Donald Trump’s administration faces investigations into whether it had links to Russia, including reports that Jared Kushner, his son-in-law and a senior White House adviser, attempted to establish a back-channel communications link to Russian officials in the weeks before Trump’s inauguration.

“I know that some administration officials are saying, ‘Well, that’s standard procedure,'” McCain said Monday. “I don’t think it is standard procedure prior to the inauguration of a president of the United States by someone who is not in an appointed position.”

The New York Times quoted White House spokeswoman Hope Hicks as saying Kushner “was acting in his capacity as a transition official,” and that he has agreed to discuss the meetings with congressional investigators.

Trump has rejected any allegations that his campaign colluded with Russia.

“Jared is doing a great job for the country,” Trump told Times late Sunday. “I have total confidence in him. He is respected by virtually everyone and is working on programs that will save our country billions of dollars. In addition to that, and perhaps more importantly, he is a very good person.”

Kushner, according to several news accounts, sought to create the secret communications link with Moscow as he met with the Kremlin’s ambassador to the U.S., Sergey Kislyak, early last December. Some foreign affairs experts said the move, while former president Barack Obama had weeks left in his term, worried them that it could undermine U.S. security and some opposition Democrats have suggested that Kushner’s security clearance should be revoked.

Kushner’s lawyer has said that he is willing to cooperate with congressional probes of Trump campaign links to Russian officials. One key lawmaker, Senator Bob Corker, chairman of the Senate Foreign Relations Committee, said Sunday, “He seems to be a very open person. I’d let him speak for himself when the time is right.” 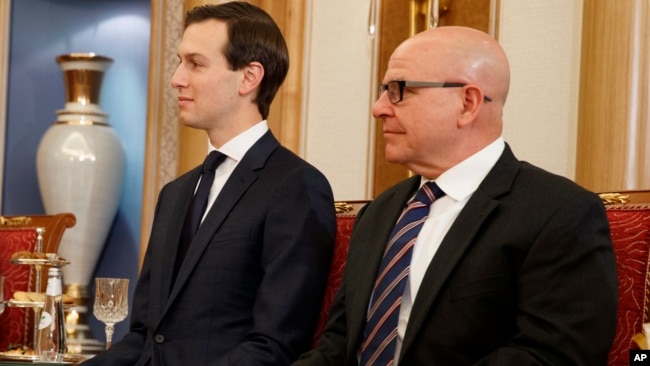 Kushner’s connection with the Russia probe was alleged in a Washington Post report while Trump was on a nine-day trip to the Middle East and Europe. Trump, when he returned to Washington, quickly assailed news media reports of White House turmoil linked to investigations of his aides and their ties to Russia.

“It is my opinion that many of the leaks coming out of the White House are fabricated lies made up by the #FakeNews media,” Trump said. “Whenever you see the words ‘sources say’ in the fake news media, and they don’t mention names, it is very possible that those sources don’t exist, but are made up by fake news writers. #FakeNews is the enemy!”

He later added a defense of his use of Twitter, saying the media “works hard at disparaging & demeaning my use of social media because they don’t want America to hear the real story!”

Trump and White House aides face months of investigations into alleged ties to Russian officials during the presidential campaign and afterwards. There also are accusations from opposition Democrats that Trump has tried to obstruct justice and curtail the probes.

A special counsel is investigating whether Trump aides colluded with Russian officials to help him win the November election, while congressional committees have called on numerous current and former Trump aides to testify.

The White House is bracing for the upcoming congressional testimony of former FBI chief James Comey. Trump fired Comey after allegedly asking him to drop the probe into former National Security Adviser Michael Flynn and his close ties to the Kremlin.

Some U.S. news reports, citing Trump aides, say the president could soon establish a White House “war room” to deal with the burgeoning number of questions about his administration’s links to Russia. The reports say Trump has hired a New York lawyer to advise him in handling the various investigations.

Trump has frequently dismissed his campaign’s connection with Moscow as an excuse by Democrats to explain his win over Democrat Hillary Clinton. She has blamed Russian meddling in the election as one of the reasons she lost. She has also blamed Comey for public announcements during the campaign that she was under FBI scrutiny for her use of email.

Democrats want to know whether the Trump campaign colluded with the Russians in hacking into unflattering Democratic Party emails and leaking them to the media through WikiLeaks to embarrass Clinton.

As Foreigners Fight in the Philippines, a New Hub for Islamic State

As Foreigners Fight in the Philippines, a New Hub for Islamic State