Trump did not make clear to what he was referring, but his comments seemed to be a further suggestion that military action was on his mind.

In a speech to a meeting of the powerful Central Committee of the ruling Workers’ Party on Saturday, state media said Kim had addressed the “complicated international situation.”

North Korea’s nuclear weapons are a “powerful deterrent firmly safeguarding the peace and security in the Korean peninsula and Northeast Asia,” Kim said, referring to the “protracted nuclear threats of the U.S. imperialists.” 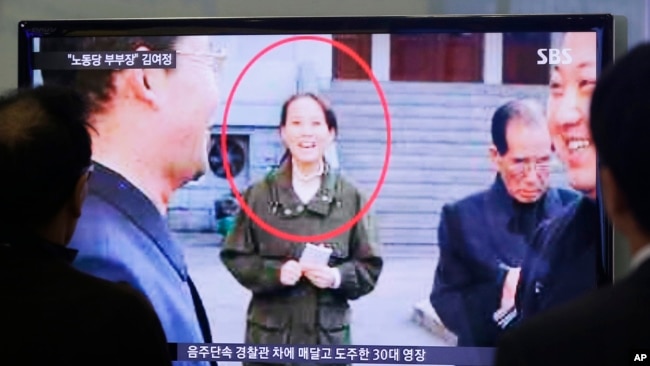 Kim Jong Un’s sister, Kim Yo Jong, was made an alternate member of the politburo, the top decision-making body over which Kim Jong Un presides.

Alongside Kim Jong Un himself, the promotion makes the 30-year-old the only other millennial member of the influential body.

Her promotion indicates the 28-year-old has become a replacement for Kim Jong Un’s aunt, Kim Kyong Hee, who had been a key decision maker when former leader Kim Jong Il was alive.

“It shows that her portfolio and writ is far more substantive than previously believed and it is a further consolidation of the Kim family’s power,” said Michael Madden, a North Korea expert at Johns Hopkins University’s 38 North website.

In January, the U.S. Treasury blacklisted Kim Yo Jong along with other North Korean officials over “severe human rights abuses.”

“Ri can now be safely identified as one of North Korea’s top policy makers,” said Madden. “Even if he has informal or off the record meetings, Ri’s interlocutors can be assured that whatever proposals they proffer will be taken directly to the top,” he said.