John Kerry, the former U.S. Secretary of State, had harsh criticism for President Donald Trump’s decision not to certify that Iran is in compliance with the nuclear deal signed by six world powers in 2015.

Kerry said the decision is a “reckless abandonment of facts in favor of ego and ideology.” Kerry, who negotiated the deal, added that Trump “weakens our hand, alienates us from our allies, empowers Iranian hardliners, makes it harder to resolve North Korea and risks moving us closer to military conflict.”

Iran’s president said Friday the nuclear deal it signed with six world powers in 2015 could not be revoked.

‘I am the Chosen One,’ Trump proclaims as he defends trade war with China

Trump: Deal with Taliban on US Troop Withdrawal Might Not Be Acceptable

US Delays New Tariffs on Some Chinese Exports

In a nationally televised speech following Trump’s remarks, Iranian President Hassan Rouhani urged all signatories to the agreement to honor their commitments. He called the Joint Comprehensive Plan of Action (JCPOA) “an outstanding achievement” in international diplomacy and said Iran would continue to comply with it.

“The Islamic Republic of Iran will not be the first to withdraw from the deal. But if its rights and interests in the deal are not respected, it will stop implementing all its commitments and will resume its peaceful nuclear program without any restrictions” Rouhani said.

The Iranian leader also hit back at Trump’s characterization of Iran as a “dictatorship” and “rogue regime,” calling the American president a “liar” and a “dictator.”

“Today the U.S. is more isolated than ever against the nuclear deal, isolated than any other time in its plots against [the] people of Iran,” Rouhani said.

He rejected Trump’s remarks listing Tehran’s support for international terrorism, calling the examples “baseless accusations” and adding that the “Iranian nation does not expect anything else from you.”

Nancy Pelosi, the top Democrat in the U.S. House, said the president’s decision was “a grave mistake” that threatens U.S. security and credibility.

She said Trump ignored “the overwhelming consensus of nuclear scientists, national security experts, generals and his own Cabinet, including, reportedly, his secretary of defense and secretary of state.”

German Foreign Minister Sigmar Gabriel said the Iran agreement “has shown for the first time that it is possible to prevent war by negotiations and, above all, to prevent a country from arming itself with nuclear weapons.” Gabriel added, ” We need such examples, for example, to convince countries like North Korea , but perhaps also others, that it is possible to create security without obtaining nuclear weapons.”

European Union Foreign Policy Chief Federica Mogherini said, “It is not in the hands of any president of any country in the world to terminate an agreement of this sort. She said, ” The president of the United States has many powers (but) not this one.” 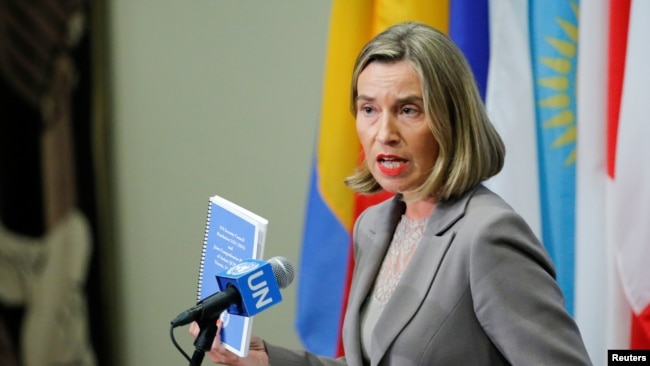 FILE – European Union foreign affairs chief Federica Mogherini speaks after a meeting of the parties to the Iran nuclear deal during the 72nd U.N. General Assembly at U.N. headquarters in New York, Sept. 20, 2017.

She noted the multilateral agreement was unanimously endorsed by the United Nations Security Council Resolution 2231.

The EU foreign policy chief noted the International Atomic Energy Agency (IAEA) has verified eight times that Iran is meeting all its nuclear-related commitments in line with the “comprehensive and strict” monitoring system.

IAEA Director Yukiya Amano released a statement, saying Iran is already subject to the world’s most robust nuclear verification regime and is implementing the deal’s requirements.

In a joint statement British Prime Minister Theresa May, French President Emmanuel Macron and German Chancellor Angela Merkel said they are concerned by the possible implications of Trump’s decision not to recertify the Iran nuclear deal.

“Preserving the JCPOA is in our shared national security interest. The nuclear deal was the culmination of 13 years of diplomacy and was a major step toward ensuring that Iran’s nuclear program was not diverted for military purposes,” the European leaders said in the statement.

Asked if he was confident he could get the Europeans to renegotiate the Iran deal, U.S. Secretary of State Rex Tillerson said Friday he thinks there is a real opportunity to address all the threats that are posed by Iran. 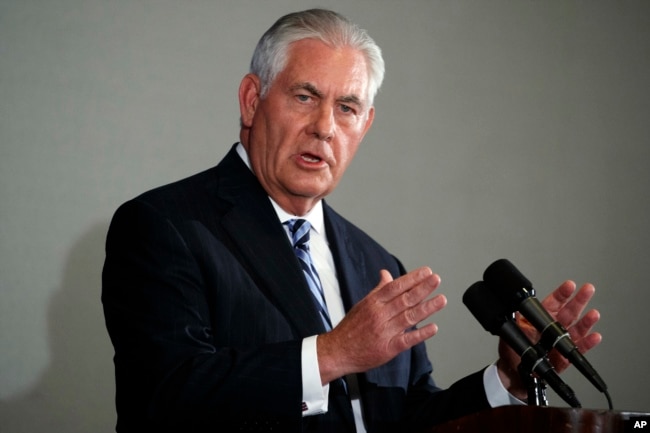 “I fully expect that our allies and friends in Europe and in the region are going to be very supportive in efforts undertaken to deal with Iran’s threats,” Tillerson told reporters.

Ahead of Trump’s remarks, the Kremlin warned that if the United States abandons the Iran nuclear deal, Tehran would be likely to quit it as well. Russia is a signatory to the JCPOA, along with the United States, Iran, Britain, Germany and France.

“China’s position on the Iranian nuclear issue has been consistent. The JCPOA has played a key role in upholding international nuclear non-proliferation regime and the peace and stability of the Middle East region,” she said. “We hope that all relevant parties will continue to uphold and implement the JCPOA.” 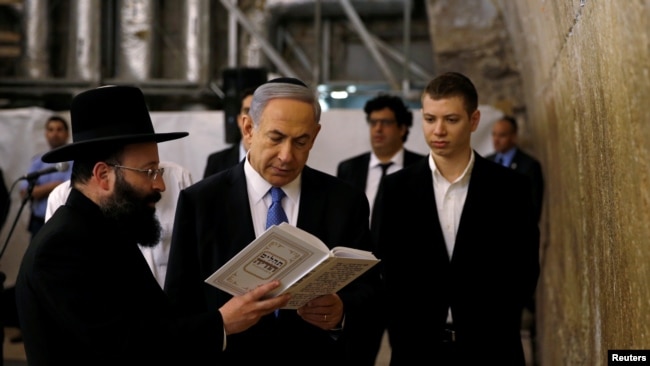 “I congratulate President Trump for his courageous decision today. He boldly confronted Iran’s terrorist regime,” Netanyahu said. The Israeli leader has long been one of the deal’s fiercest opponents.

Saudi Arabia, the United Arab Emirates and Bahrain also expressed their strong support for Trump’s shift in policy toward Iran.

The group’s executive director, Beatrice Fihn, said Trump’s “attempt to disrupt” the Iran deal, despite Tehran’s compliance, is a reminder of the “immense nuclear danger now facing the world” and the “urgent need” to prohibit and eliminate nuclear weapons.

“In a time with great global tension, with increasing threats of nuclear war, the U.S. president is igniting new conflict rather than working to reduce the risk of nuclear war,” Fihn said.