Jokowi Vows Sweeping Indonesia Reforms: ‘I Have Nothing to Lose’

Jokowi Vows Sweeping Indonesia Reforms: ‘I Have Nothing to Lose’

Indonesian President Joko Widodo vowed to implement a wave of reforms to attract foreign investment as he looks to unleash the potential of Southeast Asia’s biggest economy during his second term in office. In an interview at his Jakarta office on Friday, the president — commonly known as Jokowi — pledged to quickly lower corporate taxes, ease stringent labor laws and lift curbs on foreign ownership in more industries.

Emboldened by a landslide election win in April, the president insisted he had a mandate to push key reforms through parliament. “I know better the problems,” Jokowi said, adding that “many young people” would fill his cabinet in a reshuffle in October. “Because this is my last term, so I have no burden. I have nothing to lose.”

Following a bitter election campaign that saw violent street protests, Widodo is pushing to bolster economic growth to protect against risks emanating from weakening global demand. Lower taxes may help Indonesia compete with regional rivals like Vietnam and Thailand in luring companies seeking to relocate businesses from China as it spars with the U.S. on trade.

Indonesia’s rupiah gained 0.4% after the president’s comments on Friday, to close at its highest level since Feb. 26. The currency is Asia’s third-best performer this year. The country’s economy grew about 5% in recent years, well short of the 7% Jokowi targeted ahead of his first term. Already, projections for growth for this year and next year have been downgraded, presenting the president an early test before he is sworn into office in October. 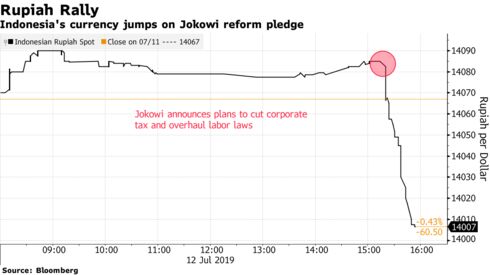 In the interview, Jokowi said he would improve worker skills, overhaul the bureaucracy, increase revenue and build infrastructure “faster” in the next five years. He will widen the number of industries open to foreign investment, saying those in need of outside capital included petrochemicals, manufacturing and labor-intensive sectors like textiles, garments and footwear.

Reform of Indonesia’s “highly restrictive” labor market “could be game-changing,” said Euben Paracuelles, an economist at Nomura Holdings Inc. in Singapore. It shows Jokowi is “willing to bite the bullet and take bolder reforms even if they are unpopular,” he said.

Jokowi said he may seek approval from parliament next month to lower the corporate tax rate to 20% or more starting in 2021. Indonesia currently has a corporate tax rate of 25%, compared with a standard rate of 20% for Thailand and Vietnam and 17% in Singapore. The country’s top individual tax level is 30%, more than the highest 22% Singapore levies on its residents.

The president also stressed the need to overhaul the nation’s labor laws, long criticized as an impediment to both foreign and domestic investment, as Indonesia competes with countries like Thailand and Vietnam. “I hope by the end of this year, finished,” he said, adding that he had already consulted with unions as well as the parliament.

While Jokowi was returned to office with an increased majority, the election aftermath saw the deadliest political violence in Jakarta in two decades after runner-up Prabowo Subianto’s supporters took to the streets to protest. Jokowi has since sought to unite the country and reassure foreign investors, who were already sitting on the sidelines awaiting the outcome of a long presidential race that officially began back in September.

On Friday, Jokowi dismissed concerns that political Islam was on the rise in Indonesia. “Indonesia is moderate Islam, modern Islam, tolerant Islam,” he said. “I’m not worried about that.” He touted his administration’s efforts to cut the poverty rate and rein in inflation while also building new airports, toll roads and seaports. His second term would see more investments in village infrastructure, like small roads and bridges that could help farmers access markets, he said.

While the government still wanted growth rates of more than 7%, external conditions made it difficult, he added. An interest rate cut wouldn’t automatically boost growth even though it would stimulate private sector activity, he said. “Now there is a trade war, low commodity prices, then global economic growth,” Jokowi said. “We must be realistic.”