The strike was said to have occurred at approximately 3:30 a.m., in the Qalamoun Mountains, northeast of Damascus, close to the Lebanese border.

According to Arab media, outposts of the Syrian Army’s 3rd Division were targeted in the strikes.

The Syrian Shaam news service quoted a spokesperson for the nearby city of Yarboud who said the Israeli jets fired six missiles at the various targets.

Some were directed toward military positions, while others targeted weapons caches near Ba’albak, in the eastern Qalamoun range, and set alight a Hezbollah convoy, according to the spokesperson, Abu al-Jude al-Qalamouni.

Anonymous security sources confirmed to the Lebanese al-Mayadeen outlet, which is supportive of Hezbollah, that missiles had been fired into Syria, but said that no damage or injuries were caused.

The sources also said that only two missiles, not six, had been fired.

The pro-government al-Masdar news service quoted a Syrian Army source as saying that the Israeli aircraft flew first through Lebanon and then into Syria.

Israeli aerial activity over Lebanon was also reported in the Beirut-based al-Jadeed outlet.

An Israel Defense Forces spokesperson refused to comment on the strike.

Israel has said in the past that it will conduct airstrikes in Syria and Lebanon in order to prevent Hezbollah from getting its hands on “advanced weaponry.”

Earlier this week, it was reported that Hezbollah had obtained advanced Russian Yakhont anti-ship missiles.

In December, Syria blamed Israel for a missile strike on the Mezzeh Military Airport, located in a suburb of Damascus, which was apparently being used as a weapons depot. 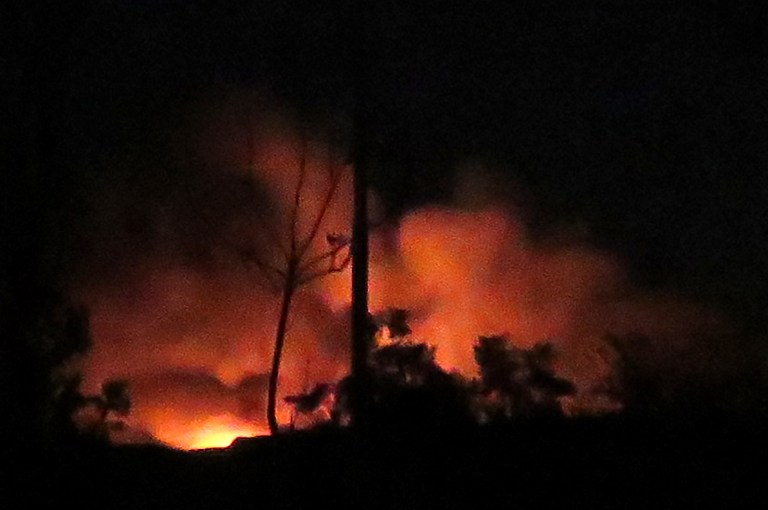 A general view shows flames and smoke at the Mezzeh military airport on the southwestern outskirts of the capital Damascus following an explosion early on January 13, 2017. (AFP)

In recent days, Hezbollah and Lebanon have ratcheted up their rhetoric against Israel.

He doubled down on those comments on Tuesday, saying there would be “no red lines” in a future conflict with Israel.

“In the face of Israel’s threats to destroy Lebanon’s infrastructure, we will not abide by red lines, especially regarding Haifa’s ammonia and the nuclear reactor in Dimona. Hezbollah possesses the full courage for this,” he said, according to an English translation of his comments reported by the Naharnet website.

And Saturday, Lebanese President Michel Aoun — an ally of Hezbollah — warned that his country would meet any perceived threats by Israel with an “appropriate response,” after the Israeli ambassador to the UN complained about his statements regarding Hezbollah.

“Any attempt to hurt Lebanese sovereignty or expose the Lebanese to danger will find the appropriate response,” Aoun said in an official statement, according to Reuters.

Churkin’s Promise: Why The Solution to The MH17 Case May Lie with a Forgotten Legal Precedent from 1905

Churkin’s Promise: Why The Solution to The MH17 Case May Lie with a Forgotten Legal Precedent from 1905