Indonesia grapples with ending tensions in Papua and West Papua

Indonesia grapples with ending tensions in Papua and West Papua

Indonesian security personnel in Papua and West Papua have striven to restore law and order, while the central government has attempted to end tensions there following native Papuans’ violent protests against the recent Surabaya incident.

The meeting concluded with representatives of the central government and Papuan figures concurring on making utmost efforts to put a prompt end to the tensions and anarchic demonstrations. They also pledged to seek solutions to help restore normalcy.

Wiranto noted that the hour-long meeting was not for fault-finding among either individuals or groups, rather both parties agreed to put greater thought and focus on ways to continue to develop Papua and West Papua in a more integrated and comprehensive manner while rectifying any mistakes of the past.

“We are talking about justice. I have been accompanying President Joko Widodo (Jokowi) for three years in developing Papua and West Papua. We focus on what infrastructure needs to be constructed there for realizing prosperity for all people of Papua,” he stated. 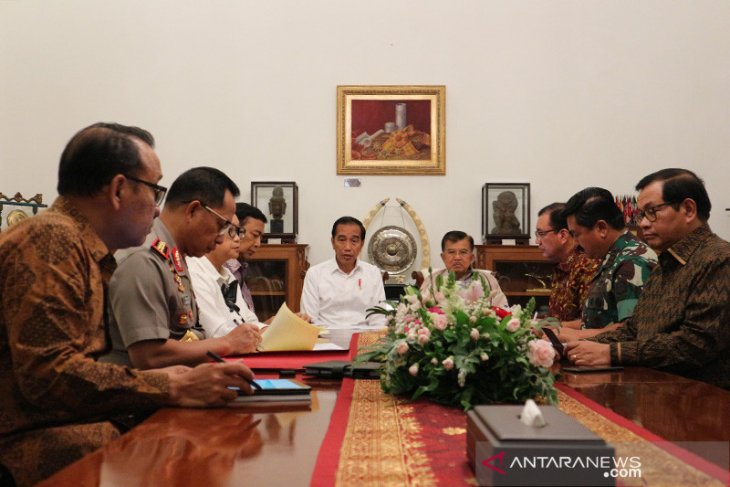 The meeting was held a day after Jayapura bore witness to riots. On Friday, residents of this capital city of Papua Province yet found several shopping malls, markets, privately-owned and government offices, as well as schools closed.

Only several public minibuses were plying, while most traders at the city’s central and fish markets in Hamadi area of South Jayapura Sub-district opted to not venture out of their homes. According to ANTARA’s observation following a visit to the markets, just some five fish merchants were serving the local residents. “May Jayapura’s situation soon return to normal,” Fatimah, a merchant at the fish market, remarked.

Iqbal, a fish seller, pointed out that most local traders were visibly absent at the central and fish markets on the belief that the consumers also preferred to not venture out while awaiting normalcy to return. He affirmed that business activities at the fish market were expected to normalize on Saturday.

In another development, the Indonesian military (TNI) and police (Polri) stationed 10 trucks on Friday to move some thousand native Papuan residents home from the Papuan governor’s office that they had occupied on Thursday evening during a violent protest against the recent Surabaya incident.

The military and police trucks, deployed at around 9:15 a.m. local time, targeted to assist in sending the native Papuan demonstrators home, spokesman of the XVII/Cenderawasih Regional Military Command Lt Col Eko Daryanto noted in a press statement made available to ANTARA here on Friday.

The native Papuan residents, who had held a protest that turned to rioting, should be sent home as a precautionary measure against clashes with members of the Community Organisation of the Archipelago, or “Payuguban Masyarakat Nusantara,” who staged a rally against them, he explained.

Daryanto remarked that military and police personnel will also call on the Community Organisation of the Archipelago members, who had rejected the Papuan residents’ violent demonstration, to stop sweeping against the demonstrators, who feared returning home. “We are also strengthening our security measures at national vital objects and are backing up the Papua provincial police to secure the rallies,” he stated.

On August 29, the indigenous Papuan residents of Jayapura, the capital city of Papua, again demonstrated against the alleged racist slurs against their Papuan compatriots in Surabaya, East Java, on August 16, but their rally took a violent turn. The brutal demonstrators went berserk, vandalizing and setting ablaze several government buildings. The office of ANTARA, Indonesia’s national news agency, in the city was also intentionally damaged by the demonstrators on Thursday.

On August 28, a circle of violence also broke out in Deiyai District, some 500 kilometers away from Jayapura. It ended with the death of an army soldier and two civilians. On August 19, several thousand people in Manokwari, West Papua Province, and Jayapura, Papua Province, had protested to voice their discontent over alleged racist action against Papuan students in Surabaya and Malang, East Java.

During the rally in Manokwari, a local parliamentary building was set on fire. The demonstrators also torched tires in several parts of the city and main streets. However, National Police Chief General Tito Karnavian stated that normalcy was restored in Manokwari. He also ordered the police chiefs of Papua and West Papua to adopt security measures and avoid the use of excessive force.

In response to the Surabaya incident, on August 22, leaders of several ethnic community-based organizations held a meeting in Biak Numfor District. They deplored the incident that had triggered a public ire, saying that they completely rejected all forms of racism and intolerance against indigenous Papuans. Speaking on behalf of the Community Organisation of the Archipelago or “Payuguban Masyarakat Nusantara,” these non-native Papuan community leaders echoed their stance on the Surabaya incident in a petition that they read out at an event in Biak.

“We, members of the Community of the Archipelago, deplore the acts of racism against the Papuan students in Surabaya and Malang,” Asep, representative of the “Bhinneka Tunggal Ika” (Unity in Diversity) Organisation, stated. For the sake of maintaining Indonesia’s unity in diversity, they called on President Jokowi and Police Chief General Tito Karnavian to bring perpetrators, who had passed racist slurs against the Papuan students in East Java on August 16, to justice.

Biak Numfor District Head Herry Ario Naap praised these ethnic community-based organizations for firmly rejecting all forms of racism and intolerance against their Papuan brothers and sisters and for maintaining unity among community members. The messages of peace and tolerance should be shared by both elites and people at large in their common efforts to end tensions and support a confidence-building measure in Papua and West Papua.

JAKARTA — A sweeping package of deregulation aimed at boosting Indonesia’s economy will be far more harmful than initially...