Batan noted the latest collaboration is a continuation of existing research cooperation between China and Indonesia. As part of that, they agreed to implement the high-temperature gas-cooled reactor (HTGR) joint laboratory programme. 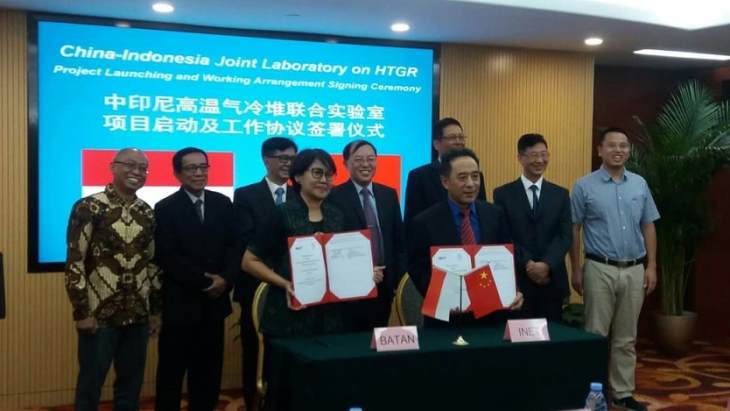 Batan chairman Djarot Sulistio Wisnubroto said this collaboration is in line with Batan’s project to construct the Experimental Power Reactor (Reaktor Daya Eksperimental, RDE), an indigenous 10 MWt small modular reactor. That project has now entered the drafting phase of the detailed engineering design. Batan said that Tsinghua University was selected as a partner in the construction of the RDE because the university has experience in HTGRs.

“I think this is good for the Batan RDE programme, because Tsinghua University has experience building a 10 MWt HTGR and is currently involved in the construction of a larger HTGR which is 250 MWe,” Wisnubroto said. The signing of cooperation agreement took place at the start of meetings that took place 29-31 August.

During these meetings, they agreed to discuss work programmes over the next three years, especially in designing an HTGR that is larger than RDE which would be constructed in Indonesia. In August 2016, Batan signed an agreement with China Nuclear Engineering Corporation (CNEC) to develop jointly an HTGR in Indonesia and to train workers.

CNEC has been working with Tsinghua University since 2003 on the design, construction and commercialisation of HTR technology. The partners signed a new agreement in March 2014 aimed at furthering cooperation in both international and domestic marketing of the advanced reactor technology.

Batan launched a plan in 2014 to build an 10 MWt RDE at its largest research centre site – the Puspiptek Complex, in Serpong, South Tangerang, Banten – as a first strategic milestone for the introduction of large-scale nuclear power plant fleets into the country. The RDE is a very small-sized pebble-bed HTGR with low enriched uranium oxide TRISO fuel.

Batan is promoting the introduction of nuclear power plants in Indonesia to help meet the county’s demand for power. It envisages the start-up of conventional large light-water reactors on the populous islands of Bali, Java, Madura and Sumatra from 2027 onwards. In addition, it is planning for the deployment of small HTGRs (up to 100 MWe) on Kalimantan, Sulawesi and other islands to supply power and heat for industrial use.

Wisnubroto said, “Hopefully people will be aware that Batan is going international, partnering with world-renowned universities, so that we can be more trusted in implementing nuclear energy programmes in Indonesia.”