International Monetary Fund (IMF) on Monday issued a statement on steps that the world’s central banks and governments need to take to ensure that the world’s economy does not collapse under the weight of the COVID-19 pandemic.

Central banks, the IMF says, “should support demand and confidence by easing financial conditions, ensuring the flow of credit to the real economy, and fostering liquidity in domestic and international financial markets.” On Sunday, the U.S. Federal Reserve lowered its lending rate to a range of 0.00% to 0.25% and indicated that it is prepared to purchase $500 billion in U.S. Treasuries and $200 billion in mortgage-backed securities.

The monetary easing policy the IMF recommends “will support demand and confidence while reducing borrowing costs for households and firms.” Central bankers can provide additional stimulus through “forward guidance about the expected path of monetary policy, and expansion of asset purchases (including risky assets).” 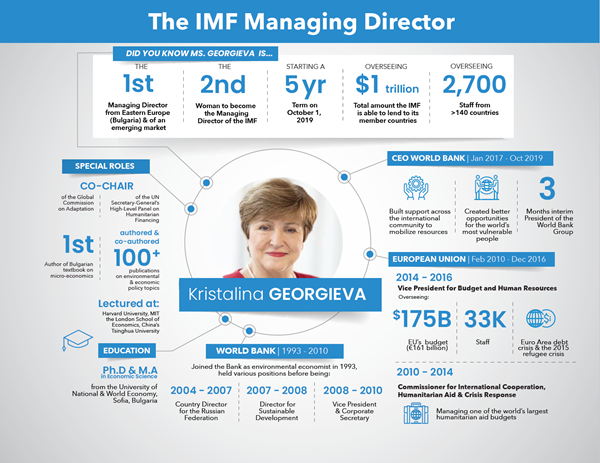 The IMF also recommends that the central banks of the G7 advanced economies coordinate their monetary easing and credit swap lines “to lessen global financial market stresses and liquidity pressures, including swap lines to emerging market economies.” Capital flows away from emerging economies rose to $42 billion last week, the largest outflow ever recorded.

To fight the economic impact of the COVID-19 pandemic, the IMF is prepared to use its $1 trillion lending capacity to help member nations cope with the expected human, economic and financial costs of the pandemic.

Governments need to be prepared to spend big, the IMF points out: “Wage subsidies for businesses affected by shutdowns can help prevent cascading bankruptcies and massive layoffs that will have lasting effects for future recovery and negative impact on aggregate demand. Cash transfers to low-income households can support consumption and preserve minimum living standards.”

Kristalina Georgieva, the IMF’s managing director, also emphasized the need for governments to provide fiscal stimulus in order “to prevent long-lasting economic damage.” Governments need to expand fiscal policies, including increased paid sick leave and tax relief targeted at a country’s most vulnerable citizens. She also noted that “the case for a coordinated and synchronized global fiscal stimulus is becoming stronger by the hour.”

Finally, the IMF recommends that regulatory agencies encourage banks “to use flexibility in existing regulations, for example by using their capital and liquidity buffers, and undertake renegotiation of loan terms for stressed borrowers.”

The IMF is encouraging governments to support aggregate demand both through central bank (monetary) policies and government (fiscal) policies that will soften the impact of quarantines and social distancing. As the infection spreads, so will the impact on the real economy, and the impact is expected to get worse before it begins to get better.