How coronavirus could affect global economy

How coronavirus could affect global economy

The World Health Organization’s decision Thursday to declare the novel coronavirus an international public health emergency could stoke investors’ fears about the disease and the economic risks it poses. And yet, a short-term hit to economic activity could be mitigated if the virus is contained more quickly through mandatory and self-imposed quarantines.

The novel coronavirus has spread throughout China, and a handful of cases have been confirmed in 18 other nations. As of Thursday, 9,692 cases of coronavirus had been identified and 213 people had died. Declaring an emergency means the WHO sees the disease as a serious global threat and will ramp up international resources to combat it.

Speaking at the news conference announcing the global health emergency, WHO Director-General Tedros Adhanom Ghebreyesus said the organization has confidence in China and praised it for taking important steps to contain the disease, “despite the social and economic impact those measures are having on the Chinese people.”

India experiences an economic storm as the coronavirus rages

Ghebreyesus said the declaration was issued in an attempt to stop the virus from spreading in countries that do not have the same robust health resources as China. The declaration doesn’t impose any direct restrictions on businesses. In issuing the declaration, WHO specifically emphasized it doesn’t recommend any new limits to trade or travel, including border closures, traveler quantines and visa denials.

Countries can still impose their own travel restrictions — some already have — but WHO said it will ask countries to reconsider those measures. But the declaration still signals to investors that the disease is not contained within China, raising a host of uncertainties. “And markets don’t like uncertainty,” said Todd Lee, executive director of global economics at IHS Markit.

During a news conference Wednesday before the emergency was declared, Federal Reserve Chair Jerome Powell nodded to those unknowns.

“The situation is really in its early stages, and it’s very uncertain about how far it will spread and what the macroeconomic effects will be in China and its immediate trading partners and neighbors and around the world,” Powell said, adding the Fed is carefully monitoring the situation.

Much of the economic impact depends on how individual consumers respond.

“These new diseases are more about the fear than they are about the reality,” said William Karesh, executive vice president for health and policy, EcoHealth Alliance, a New York-based nonprofit. Karesh said the seasonal flu, for example, is much more prevalent and kills more than a half million people each year, but people are not as afraid of the flu because it is not new.

If consumers are afraid of traveling because they could be exposed to the virus, they might spend less money on airplane tickets, for example, and that would be a negative consequence for the global economy.

In addition to individual consumers taking action, some factories and stores have been temporarily shuttered in an effort to contain the virus.

The virus first began to spread during the Lunar New Year celebrations, so Chinese factories were already idle for the holiday. The government has now extended the holiday through Feb. 2, but if factories remain shuttered for much longer, it could end up causing major disruptions to global supply chains. China accounts for about 20 percent of global manufacturing output.

Around the world, most businesses do not stockpile supplies but instead rely on those supply chains to get their parts from China on a regular basis. If that schedule is disrupted, it could hurt American and other businesses trying to fulfill orders.

The U.S. State Department on Thursday increased its travel advisory for China to the highest level, warning people not to travel to that country.

“Travelers should be prepared for travel restrictions to be put into effect with little or no advance notice,” the advisory warned.

Businesses including McDonald’s, Starbucks and several hotels have also chosen to close select locations to prevent the virus from spreading. American Airlines, United, British Airways and several other airlines have cut flights to China because of the outbreak.

Travel restrictions are likely putting a dent in China’s tourism, as well as tourism from China. That nation sends the third-highest number of travelers to the U.S. each year, and the average Chinese visitor to the U.S. spent about $6,500 in 2018, according to U.S. Travel Association data.

How reducing economic activity could help in the long-run

Some of that economic loss cannot be recovered. If grocery stores are shuttered, food will go bad and businesses have to absorb the cost.

But many other types of economic activity — like travel and purchases from factories — can be postponed rather than cancelled altogether.

So while there is a drag on the economy now, much of that economic loss will be made up once the virus is contained and no longer seen as a threat.

The wild card is if the virus is not contained quickly. Then the economic loss drags on, companies have to change their plans, which increases costs, and tourists are too afraid to travel for years rather than months.

That is why taking dramatic steps now — shutting down businesses, and, in the case of individuals living in high-risk areas, deciding not to travel, shop or go to work — could be good in the long-run for the global economy. Taking significant measures aims at reducing people’s exposure to the disease and slowing its spread.

“It might be better to have a short-term quarantine and have high short-term economic costs than to have a longer term where people are concerned about diseases floating around,” said Anup Malani, an economist and professor at the University of Chicago’s Pritzker School of Medicine.

While it’s too early to tell how much of an economic impact the novel coronavirus will have, some economic analysts are using the 2003 SARS outbreak as a benchmark.

During that outbreak, more than 8,000 cases were confirmed and 774 people died. The World Bank has estimated that SARS cost the world $54 billion. 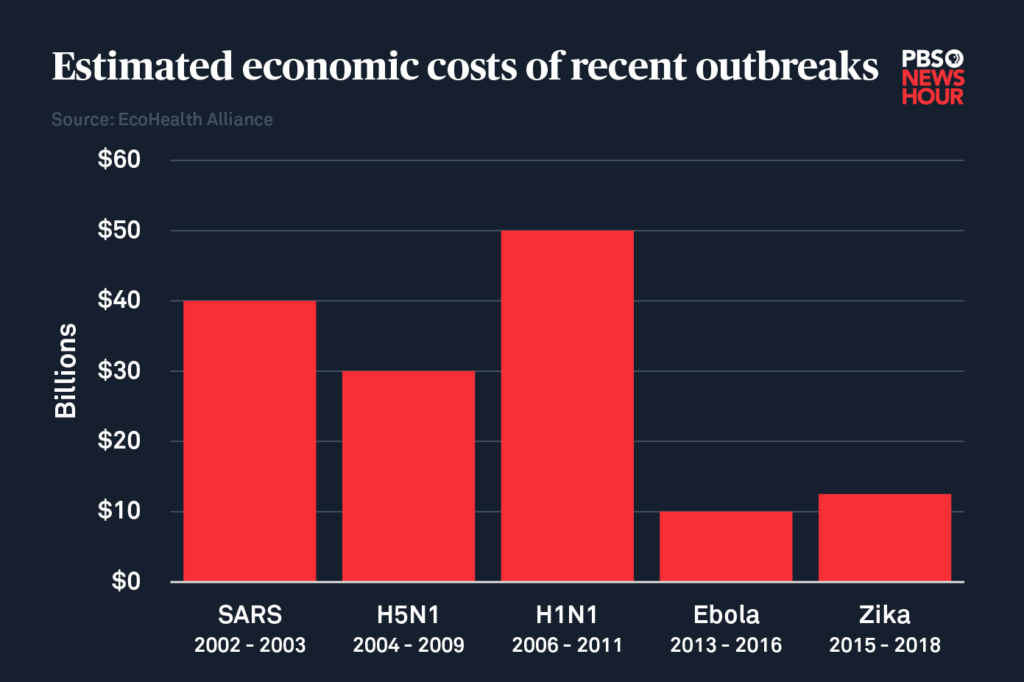 A key difference between SARS and novel coronavirus is where most cases are concentrated. The majority of the current cases — more than 3,500 — are in Hubei province, which accounts for about 4 percent of China’s GDP. In 2003, more than 2,500 SARS cases were reported in Beijing, which, at the time accounted for 15 percent of the country’s GDP.

On the other hand, China is now a much bigger player in the global economy. In 2002, China was the sixth-largest economy in the world; in 2020, it’s the second-largest. Today, what happens to China’s economy has a larger effect on the rest of the world. The virus’ spread also comes just as fears of a global economic slowdown were starting to subside.

“The global economy, toward the end of last year, began to show signs of stabilization even in China. This will disrupt that,” Lee said. Just how much depends on what happens next.

Brexit: All you need to know as UK leaves the EU