Hong Kong’s reluctant police: ‘It’s not for us to deliver punishment’

Hong Kong’s reluctant police: ‘It’s not for us to deliver punishment’

Larry Yeung* cuts a lonely figure in the police force these days. He joined more than 20 years ago because it appealed to his sense of justice. Proudly showing off his graduation tie, he reminisces about his desire as a young recruit to serve society and help the disadvantaged.

“I abide by what the force has taught me,” he says, showing a list of values and mission he signed up for. Among them is “upholding the rule of law”, “impartiality and compassion” and “respect for the rights of members of the public.”

But the recent political crisis in Hong Kong, which has seen police using violent tactics to crack down on increasingly radical protests, has tested his loyalty to the force.

“Police should protect citizens, but instead, we’ve become a tool of the authorities for ‘stability maintenance’,” Yeung says, with a rueful smile. “Our top officials are hiding and we’ve become their shields.” 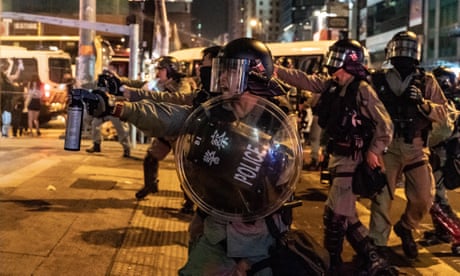 Animosity between police and citizens has grown to an alarming level as ever-increasing amounts of tear gas, rubber bullets, beatings and water cannon have been used to deal with the resentful crowds. On 1 October, police fired a live round for the first time, injuring an 18-year-old in the chest. Three days later, a 14-year-old was shot in the thigh. In the past four months more than 2,700 arrests have been made.

Protesters have also resorted to increasingly radical acts in what they see as justified retaliation. Masked activists have thrown bricks and petrol bombs at police, trashed metro stations and shops seen as pro-Beijing. They have lit street fires and even attacked police or people suspected of being undercover officers or just being pro-government. Earlier this month, a home-made bomb exploded and a police officer was slashed in the neck by a protester.

Indiscriminate beatings by police gave rise to rumours of covered-up deaths. Widely circulated stories about physical and sexual abuse in a remote police detention centre have led to an unprecedented level of anger and resentment against officers. Yeung disapproves of his colleagues’ behaviour, something that has driven a wedge between them.

“When we were in the academy, we were taught to use only the minimum amount of force. It’s not for us to deliver punishment,” he says. “But now, the majority of the police think the ‘rioters’ need to be punished … they attack people indiscriminately, even non-protesters.”

“The awful thing is, the majority of police don’t see it as a problem.”

“When they watch footage of police beating people, they shout for joy: ‘Yeah, we’re hitting the cockroaches!’,” he says. “They don’t give any consideration to their high ideals of freedom and democracy.”

Asked why police have resorted to increasingly brutal acts, Yeung says many of his colleagues were angry and felt entitled to abuse their powers.

“It’s the ‘Lucifer effect’– power drives people crazy. They’re angry and they need an outlet. But this is sacrificing the reputation of the police force.”

Yeung says officers are no longer required to be accountable for their acts. While dealing with protests, riot police officers now wear black masks and do not show their warrant cards and their police numbers on their uniforms. Internal rules require police to write a report every time they use batons, pistols and pepper spray, but many simply don’t bother anymore, he says.

Yeung has tried to make his colleagues see things from another perspective, but this has led to him being labelled a traitor.

“I tried to explain to them what civil disobedience is about. Like, if your boss refused to grant you your entitled holidays, then you take sick leave. It’s about fighting against the system through legal means,” he says.

The government has repeatedly refused to establish an independent commission to investigate police brutality, and this is sparking more even more public anger as it is one of several demands that protesters insist must be fulfilled. Yeung believes the authorities’ endorsement of harsh crackdown is actually fuelling protests.

Last month, a pro-Beijing Hong Kong newspaper reported that China’s public security minister had become a deputy head at the Communist party’s Hong Kong Macau liaison committee – an unprecedented move analysts say has bolstered the control of the city’s police force by China, which sees crackdown as a natural response to unrest

“I think they want to push terror to an extreme. Beat them and arrest as many as you can, and people will be too scared to come out again,” he says of his bosses’ attitudes.

Yeung sympathises with the protesters: “If I wasn’t a policeman I’d be out on the streets like them.” Even though Yeung thinks differently from many of his colleagues, in the eyes of protesters, he is still a “black cop”.

“One time, a group of young people yelled at me when I was inside a police van. I held up my arm as if to say it has nothing to do with me. But how can I not be one of them? I have not come out to correct my colleagues’ faults – that is complicity.”

Asked whether he had thought about resigning, Yeung, in his 40s, says he has a young family and that makes it difficult. “But I won’t rule out that possibility,” he says. Yeung, a Christian, insisted that his mission was to help the weak and to speak up about inequality. He maintains he can only support a government that serves the people.

“If the country is built with flesh and blood, if people’s freedoms and lives have to be sacrificed for ‘development’, I’d rather not have that,” he says. “The very least I can do is to refrain from doing evil myself and to remind my colleagues not to get excessive. But they often ask: ‘So, which side are you on?’”

*name has been changed to protect identity