England and Belgium have played each other twice at this World Cup and on both occasions neither side particularly cared if they won or lost. The first instalment came in the final group stage match when the two sides were level on points, level on goal difference, goals scored, goals conceded and were only separated by fair play points. Belgium won 1-0 on the night and advanced as group winners and thus, got the harder side of the draw.

In hindsight, maybe losing would’ve been a better option for Roberto Martinez’s men. It’s hard not to see a side as talented as theirs fail to get past Colombia, Sweden and Croatia. But that would be playing fantasy football – and probably yet more ‘arrogance’ from an Englishman. 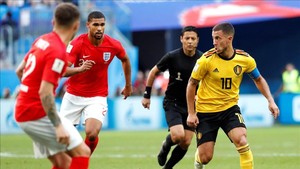 The second instalment was slightly more important but, at the same time, utterly irrelevant. No one remembers the sides who finish third or fourth at major tournaments. It’s like people who say ‘winning isn’t important, it’s the taking part that counts’. They’re wrong. At the World Cup, winning is all that matters.

It was no surprise to see Belgium take control of proceedings early on. England made more changes and it showed, particularly in defence. Danny Rose is still finding it hard to get up to speed and Phil Jones is an accident waiting to happen.

The most noticeable difference was the pace at which Belgium broke on the counterattack. It was a speed only England, masters of the pedestrian pace, could dream of having themselves. Nacer Chadli won a header on the halfway line and knocked it across to Romelu Lukaku. The Manchester United forward spotted Chadli’s run in behind and threaded a wonderful ball into him. A fine cross into the box was converted by fellow wingback Thomas Meunier. 1-0. Déjà vu.

England fought back into the contest but, as has been their Achilles heel throughout this tournament, they were unable to convert their possession into chances on goal. If anything, that makes Harry Kane’s likely Golden Boot victory even more impressive. The lack of a true number ten, a creative force behind the striker, ultimately made England quite rigid. If only Kevin De Bruyne had an English grandparent.

At half-time England made two attacking changes as they brought on Marcus Rashford and Ruben Loftus-Cheek for Rose and Sterling. Attacking changes, sure, but it didn’t have much of an impact in terms of creativity. It was a positive switch from Gareth Southgate none the less.

It remained 1-0 purely because Lukaku had as much luck trapping the ball as Wile E Coyote did getting his hands on Roadrunner. He was substituted midway through the half as no doubt Kane muttered “beep, beep” under his breath. That probably signalled the Tottenham striker winning the Golden Boot despite not scoring in his last three matches at the World Cup.

Jordan Pickford made a wonderful save to deny Belgium the goal of the tournament. A lovely flowing move which went from left to right deserved a goal but England’s angry young stopper was in no mood to let that happen. Eric Dier, at the other end, was only denied by Toby Alderweireld’s goal line clearance. The game had a bit of life to it at last as England poured forward looking for an equaliser.

And just as the game sparked into life, there was Eden Hazard the killjoy to essentially end the contest. The man of the moment scored his third goal of the tournament and ensured that Belgium would pick up a third place medals while England would make do with the wooden spoon.

Football didn’t come home. It didn’t even come third. However, that shouldn’t detract from what has been a wonderful tournament for England and its fans as they rekindled the pride so many have in their national teams. There was no arrogance, just playful joy at their adventure lasting as long as it did.

Belgium deserved to win, as they were the better side. But was this their ‘Golden Generations’ last chance to win a major international title? Maybe, maybe not. As England showed at this tournament, a bit of luck and a kind draw can take you quite far. Maybe next time Belgium will be smarter and pick the easier route to the final.