The big story of the 2018 Winter Olympics in South Korea has been the participation of North Korea and the friendly tone struck by the two countries. So, will the Olympic legacy be permanently improved relations? As the Games began in Pyeongchang, the South Korean and North Korean athletes walked in the opening ceremony as a joint team. It was a moment heavy in symbolism, with their shared flag a neutral image of a “unified” Korean peninsula on a white backdrop.

Then, Kim Yo-jong – the sister of Kim Jong-un – went on a so-called Olympic charm offensive, a joint women’s ice hockey team played and a squad of North Korean cheerleaders enthralled audiences around the world. But will the apparent Olympic rapprochement last? The weight of expectation based on unusually friendly words has certainly been high. Widespread news coverage – both in South Korea and around the world – has seen suggestions of a breakthrough in inter-Korean relations. 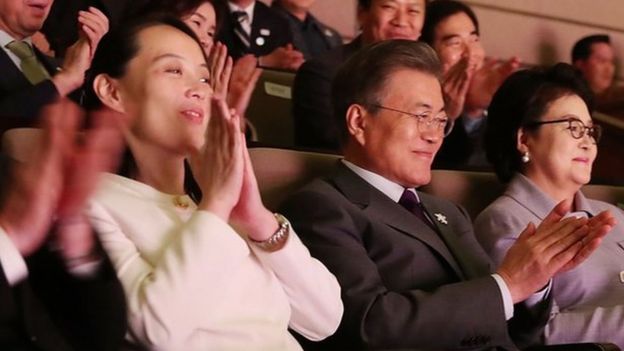 South Korea’s liberal media has spoken of an “Olympic spirit” smoothing talks with the North, as has the liberal administration of President Moon Jae-in. But not everyone is quite so happy. Conservatives are so unnerved, that editorials in South Korea’s right-wing media regularly argue against conceding too much to Pyongyang in any discussions. One concern is that the North could ask for a halt to joint South Korean and US military exercises, in exchange for a vague promise of a freeze to its missile or nuclear programmes, on which it will then cheat.

The reality is that expectations may be misplaced on all sides, with a return to the status quo perhaps most likely. A sporting event is unlikely to have much bearing on the deep political divides between the two countries. Decades of talks have not yet brought reconciliation and, at the risk of sounding excessively gloomy, the likelihood is that relations will return to form – tense, uncomfortable and worrisome, but also stable. The Korean status quo has been remarkably constant since the end of the Korean War 65 years ago.

North Korea remains arguably the world’s most dangerous state, its nuclear weapons programme only increasing the risk it poses. The possibility of talks when it shows interest – as it suddenly did in January – is always going to raise hopes in a world desperate to find a way to rein in Pyongyang without conflict. However, previous negotiations have collapsed and – happy atmospherics of the Olympics aside – little has changed. The North Koreans are canny, tough negotiators.

They fight for every inch and get deep into the weeds on specifics. Any concessions the US and South Korea might be asked to make are interpreted as widely as possible, while any that might be expected of them are defined as narrowly as possible. Implementation of deals with the North have stumbled time and again on thorny issues of interpretation and timing. The likelihood that an Olympic spirit of bonhomie will bring about some serious concession from Pyongyang is almost zero.

That would be very out of character with the regime’s past negotiating behaviour. The left in South Korea may also hope to see some kind of gesture from its government. It often sees the North more as ethnic kinsmen, unfairly separated by the Cold War, than as ideological opponents. But President Moon was elected with 41% of the vote and may not have the political space to make a major, unilateral, Olympic concession. The South Korean right would be apoplectic, with some conservatives already concerned that President Moon is desperate to make a deal, having long argued that talks are the way to improve relations with North Korea. 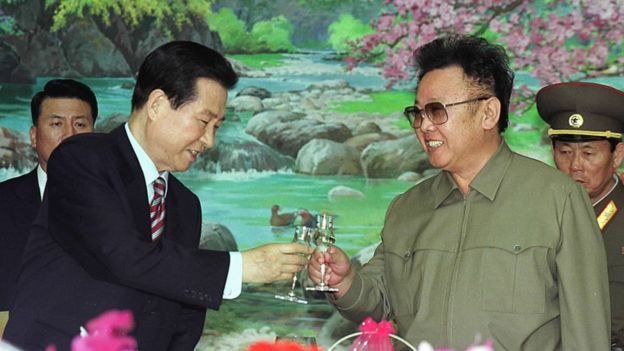 The US would also be deeply unimpressed, particularly given the hawkishness of the Trump administration on North Korea.  President Moon may indeed go to Pyongyang in the coming months, as per the North’s Olympic invitation – hand-delivered by Kim Yo-jong at a landmark meeting in Seoul.  Although there has not yet been a formal agreement, Mr Moon said the Koreas should “make it happen” and encouraged the North to return to negotiations with the US.

But this too is ultimately atmospherics: a summit does not necessarily mean true progress and little has been said about exactly what would be discussed. There is also the risk that the North will spin a visit as the South’s recognition that North Korea is a real state – rather than an aberrant part of South Korea. Opinion in the South would be divided as President Moon’s base wants dialogue, but conservatives fear appeasement. Previous summits – in 2000 and 2007 – did not really help.

It even transpired that, ahead of the 2000 summit, $500m (£357m) was remitted to North Korea by the Hyundai group, with the knowledge of the South’s government, leading critics to say the meeting had been “bought”. Now, the most likely outcome is a return to talks similar to those of the past: a long, hard slog characterised by deep distrust and micro-detail. But talking is progress of a kind, one might argue, and after last year’s fears of war, at least the two sides are engaging.

However, other events in 2018 threaten to slow that engagement to a crawl, if not derail it. For example, every year, the US and South Korea hold joint military exercises, to which the North typically responds with rhetoric about annihilating its enemies.  It is unlikely that it will be able to contain itself as the exercises resume after the end of the Olympics. Similarly, the North has widening nuclear and missile programmes. It may hold off tests to keep talks rolling, but if it does test, conservative criticism of President Moon as naive dilettante will be crushing.

Past negotiations have broken on the rocks of such regular pressure points in the relationship.  Perhaps this time is different and the North will make a real concession – in the Olympic spirit – to jump-start talks and overcome massive global scepticism about its intentions. But it is more likely that it will try to separate South Korea from the US, playing on the deep dislike in South Korea for President Trump. There is also the possibility that it will make demands which the South can never meet – such as its recent request for the return of defectors.

So, while the hope remains that things will be different after the Olympics, the reality is that it’s better not to raise hopes too high.

Robert E. Kelly is a professor of international relations in the Department of Political Science at Pusan National University. Follow him @Robert_E_Kelly

Bangladesh says to meet with Myanmar on Rohingya trapped at border

Coronavirus and market crash: Why many first-time investors may turn away from equities