But as each day passes without a word of assurance from family on the island territory, a growing cloud of frustration and anxiety thickens the New York air. One of the largest Puerto Rican diaspora communities on the U.S. mainland is uncharacteristically subdued.

“The pain has been unimaginable,” says José, who introduced himself to VOA, but declined a formal interview. “The words don’t come out,” he said, “it makes me too sad.” 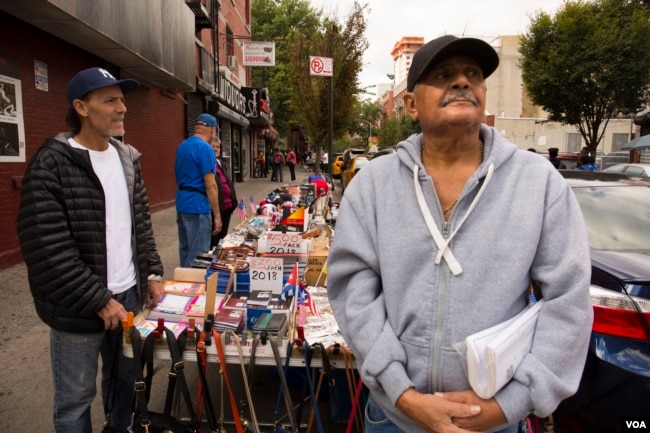 Gil Morales, a Puerto Rican and Vietnam veteran who describes himself as a “patriot” who would “give my life to this country,” is frustrated at the speed of federal recovery efforts on the island. “Get your butts down there, and take care of them!” he exclaimed. (R. Taylor/VOA)

In contrast to his blue cap and red-accent clothing, a variation of his flag’s colors, José echoed a feeling that has overcome an entire diaspora community: “I live here, but my heart is in Puerto Rico.”

Among East Harlem residents, upset by the slow federal aid response and growing humanitarian crisis, a sense of helplessness has bred further anger.

“They do not even believe in [President Donald Trump] anymore,” said Larry Montes, 37. Unable to contact his 82-year-old asthmatic grandmother, who raised him on the island, Montes worries about her well-being.

“I know that she’s going to run out of her medication,” Montes said. “I want to know how she’s doing health-wise. I want to know if my family is actually receiving supplies at all.” Clotilde Solís, who moved to the U.S. mainland more than a decade ago, says she has spent days trying to communicate with her husband’s family in Patillas, Puerto Rico, but has been unsuccessful. (R. Taylor/VOA)

​Gil Morales, a 68-year old Vietnam veteran, was hesitant to directly blame the president for the slow recovery. But as “a patriot” who says he would give his life to his country “in a blink,” he expects the same treatment be applied toward his native U.S. territory.

“Get your butts down there and take care of them!” he exclaimed. “Send help!”

Last week, Trump said there were 10,000 federal workers and 5,000 National Guard members on the island.

But ongoing distractions, including a series of Twitter attacks by the president, directed at San Juan’s mayor and major news outlets in response to criticism of the government’s response, have done little to ease anxiety.

New York Mayor Bill de Blasio — while unable to provide a precise estimate — expects that the city will take in “thousands” of fleeing Puerto Ricans in coming weeks, as more flights become available out of San Juan, the capital. 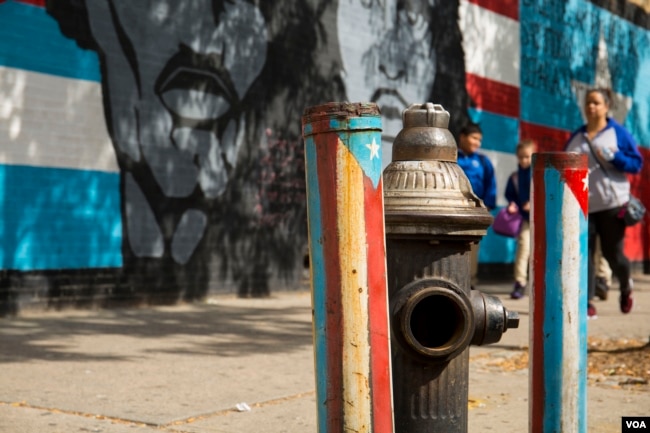 A mural and painted pipes in the colors of Puerto Rico’s and Cuba’s flags brighten the streets of East Harlem, New York, home to one of the largest Puerto Rican diaspora communities in the U.S. (R. Taylor/VOA)

Clotilde Solís, who has spent days trying to communicate with her husband’s family in the small town of Patillas, hopes enough resources can be made available for a smooth transition.

“It would make me happy if the government can accommodate them [here], because they need it,” Solís said. “These people need a roof where they can be reunited as a family.”

During a press conference last week, de Blasio said an operations center had been established on the ground, to establish health care needs in New York.

The city’s public schools, the mayor added, stand ready to accommodate an influx of children.