Voters in France prepared to go to the polls Sunday, ending what observers describe as the country’s most contentious and divisive presidential campaign since the founding of the Fifth Republic.

Sunday also could mark the start of a new path for France and its relationship with the rest of Europe, regardless of who wins.

Surveys at the official end of campaigning had centrist Emmanuel Macron in a strong lead, with 62 percent support, and nationalist anti-immigration candidate Marine Le Pen at 38 percent.

The faces of the Hong Kong’s revolution

Macron’s campaign late Friday said it had been “the victim of a massive and coordinated (computer) hack” that resulted in the leak of campaign emails – a mixture of both real and fake documents – on social media. 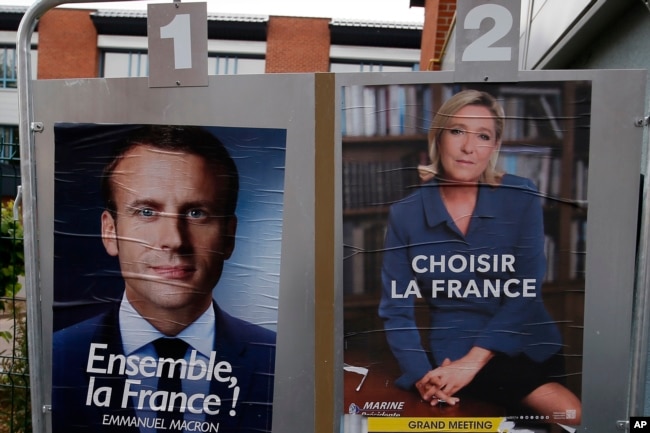 For the first time in recent history, French voters will cast ballots in a presidential election with no candidates from traditional establishment parties.

Their choices are between Macron – a centrist from the left who is pro-business and pro-Europe – and Le Pen – who wants France out of the European Union and an end to most immigration, especially from Muslim countries.

In the final week of campaigning, Le Pen made one last push to convince voters she is the one who can best deal with the challenges of a changing Europe.

“Because all of those countries are more or less backing away from the ideology of free trade, of competition and of undermining social protection, so I feel much more in line with their political philosophy,” she said on French television.

Le Pen came in second in the first round of voting two weeks ago, but she hopes her promises of returning French factory jobs and boosting social benefits will win over the far left. Macron, to his supporters, represents a more balanced and pragmatic approach to a globalization that cannot be reversed.

“It is not only the intellectual, political and moral heritage of France which is at stake now, but also the future of a united Europe, master of its own destiny, the future of a world that we have decided to take part in,” Macron said in an interview on French television. 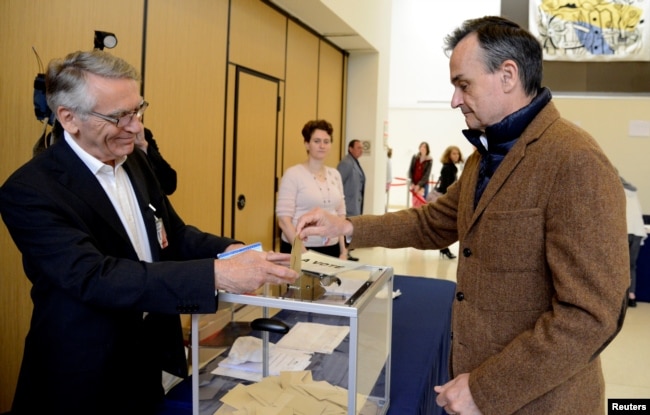 One of the highest unemployment rates in Europe and a string of Islamist terrorist attacks have prompted big questions about globalization and what many perceive as failed policies.

Le Pen wants to get rid of the Euro and would like a Brexit-like referendum on France’s continued membership in the EU.

The left and center see her as dangerous. In a final debate marred by personal attacks, Macron said Le Pen would provoke a “civil war” in France.

In arguing about France’s industrial policy, Le Pen chided Macron for lecturing her like a teacher would a student, referring to Macron’s marriage to his former high school teacher, a woman 24 years his elder.

Reports of the hacking of Macron’s emails added to the suspense on Saturday.

Mainstream media were banned from releasing the hacked emails, in keeping with restrictions that forbid campaigns from making statements or disseminating propaganda within 24 hours of the start of voting.

The release of potentially damaging information did not daunt his supporters, who were confident of a solid victory Sunday. Some were troubled, however, that the breach could hurt his numbers.

“He has no opportunity to defend himself,” said Nicolas Brocard, a 19-year-old law student in Paris, who has volunteered to mobilize young voters for Macron.

“At this time we are in a period of restriction on campaign propaganda and the mainstream media cannot defuse the [hacked] information,” he told VOA. “Parts of it are appearing on social media where the information is not reliable,” said Brocard.

Nacron promises reforms in France’s relationship with Europe. His big challenge has been to convince voters he, as a former member of the unpopular ruling Socialist Party administration, will not bring more of the same.

Still, he has consistently led in the polls and is widely favored to win Sunday “because he managed to present himself as an outsider. As a maverick within the administration,” Paris historian Patrick Weil, told VOA. “Now, what will be the meaning of this revolution, we don’t know yet,” he said.

France is deeply divided, perhaps more than at any time in its post-war history. Either way, Sunday’s election will mark a change. The big question is how much of one French voters really want.

‘We Believe in a Multi-Cultural Malaysia’

‘We Believe in a Multi-Cultural Malaysia’

Australia suspended its extradition treaty with Hong Kong and offered an immigration pathway for residents fleeing the city, after several...