“If you refuse to join, IS militants take you away by force,” said Ahmed Ali, 29, a former farmer in Syria’s northeastern countryside. “We don’t actually know where they take people. But they don’t come back.”

Surrounded by more than 20 other young men in a sweltering tent, Ali described fleeing Islamic State militants three nights earlier, paying a series of smugglers $1,000 to get him to the relative safety of a camp in the town of Ain Issa.

A week ago, Islamic State fighters had hung fliers all over his village, ordering all men from 20- to 30-years-old to join their ranks.

Other men chimed in, some saying militants were demanding service from men from 16 to 36 in their villages.

“I left my wife and my son behind,” said Ali. His family, like all those remaining in his village, is poor and he could not afford to smuggle them out. “Anyone with money left a long time ago.” 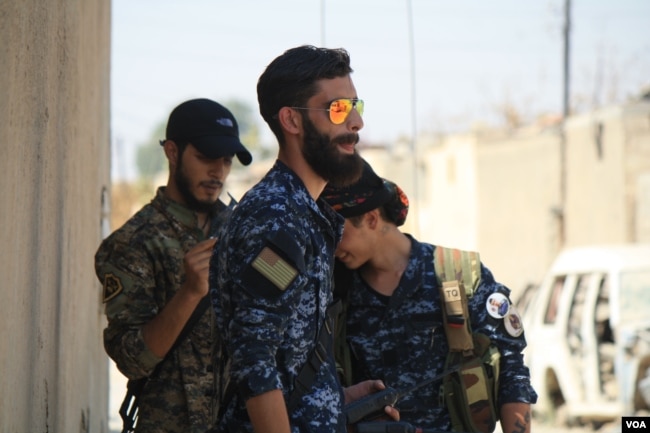 Units of U.S.-led coalition backed Kurdish and Arab fighters have taken much of Raqqa, once the de-facto capital of the self-proclaimed Islamic State, but the fighting is expected to continue for months, Aug. 20, 2017. (H.Murdock/VOA)

Syrian government forces, as well as forces from a U.S.-led coalition of Kurdish and Arab militias have been recapturing IS-held territory for months. And as enemy forces close in on each IS area, the militants become their most brutal, soldiers in Syria say.

Besides last-ditch attempts to gather forces, IS militants are attacking with car bombs, sniper fire and mortars, said Matay Hanna, a soldier with the MFS, a Christian brigade within the Syrian Democratic Forces, an umbrella group of Kurdish and Arab fighting groups led by the Kurdish People’s Protection Units, or YPG.

Some militants in Raqqa, once the capital of the self-proclaimed caliphate, come out of their strongholds fighting, in apparent attempts to escape oncoming forces, Hanna said, kneeling behind a brick wall on the roof of a building across the street from a suspected IS sniper point.

The militants “are suffering from sleep deprivation, lack of water and lack of food,” he said.

At the camp in Ain Issa, about 55 kilometers (34 miles) from Raqqa, Ali and other displaced Syrians also lack enough food, clean water and health care. 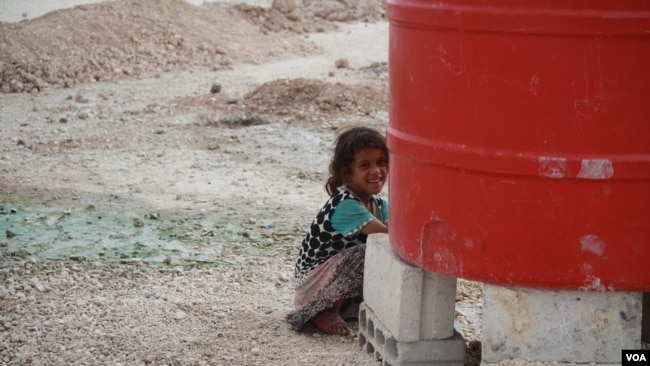 More than half of the population of Syria has fled their homes during more than six years of war and the U.N. say nearly 225,000 have fled in the Raqqa governorate in the past five months alone, Aug. 17, 2017. (H.Murdock/VOA)

The United Nations says nearly 225,000 people have fled their homes in the Raqqa governorate in the past five months and half of the population of Syria is displaced after more than six years of war.

Before IS took over about three years ago, rebel groups and al-Qaida-linked militants were battling in Omar’s village.

IS brought a certain level of political stability, but the militants also brought extreme violence and poverty. With his father dead, and very few resources, Omar, 24, said he had no choice but to remain at home to take care of his mother and sister.

That was until he was told to fight for IS or face arrest and possibly execution. Fleeing was a heartbreaking choice, Omar added, because IS is known to arrest family members of individuals that escape their areas. 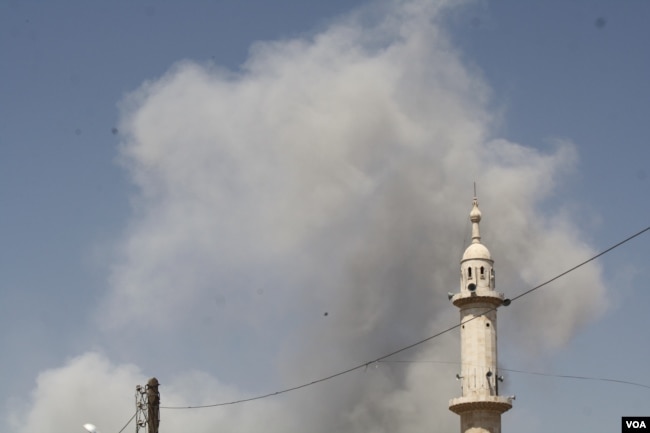