Scientists are calling for urgent action to halt the spread of a pest that is destroying maize crops and spreading rapidly across Africa.

The fall armyworm poses a major threat to food security and agricultural trade, warns the Centre for Agriculture and Biosciences International (Cabi).

It says farmers’ livelihoods are at risk as the non-native insect threatens to reach Asia and the Mediterranean.

The Food and Agriculture Organization plans emergency talks on the issue.

The fall armyworm, so called because it eats its way through most of the vegetation in its way as it marches through crops, is native to North and South America but was identified for the first time in Africa last year.

Cabi chief scientist Dr Matthew Cock said: “This invasive species is now a serious pest spreading quickly in tropical Africa and with the potential to spread to Asia.

“Urgent action will be needed to prevent devastating losses to crops and farmers’ livelihoods.”

Scientists think the caterpillar or its eggs may have reached the continent through imported produce.

Once established in an area, the adult moths can fly large distances and spread rapidly. 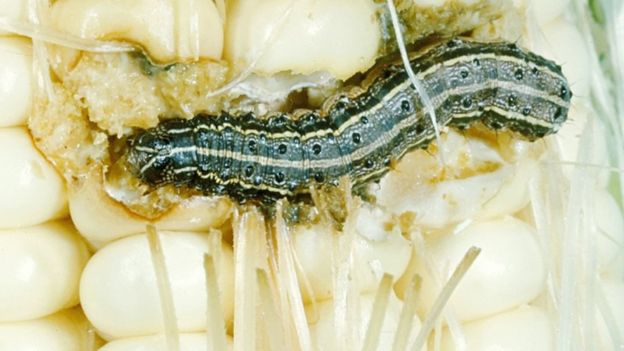 Dr Jayne Crozier, of Cabi, said the fall armyworm’s presence had now been confirmed in west Africa and was thought to be present in the south and east of the continent, many parts of which rely on maize for their staple diet.

“It’s possibly been there for some time and it’s causing a lot of damage now,” she told BBC News.

“The recent discovery of fall armyworm in Africa will be a huge threat to food security and also to trade in the region.”

The FAO is to hold an emergency meeting in Harare between 14 and 16 February to decide emergency responses to the fall armyworm threat.

It says the pest has been confirmed in Zimbabwe and preliminary reports suggest it may also be present in Malawi, Mozambique, Namibia, South Africa and Zambia.

An investigation by Cabi has found that the fall armyworm is established in Ghana.

Experts at Cabi say it could take several years to develop effective methods to control the pest.

And they say there is confusion over the identity of the fall armyworm as it is similar to other types of armyworm, which are already present in Africa.

Commentary: Thanks to Rizieq, Gen. Tito’s Political Career to Skyrocket